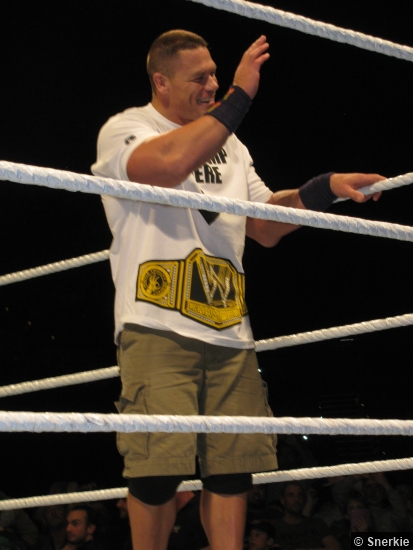 Prior to SummerSlam, several sites were reporting that John Cena had suffered an injury to his elbow and would be requiring surgery after SummerSlam and, on last night’s RAW, John Cena confirmed the rumors himself, revealing that the WWE doctors have informed him that the large “ball” on his left elbow is the result of a torn triceps muscle. The torn muscle will require surgery to repair and Cena will be going under the knife and will be taking four to six months off to recover from the operation. Cena commented on the injury, saying “I cannot put off my surgery any longer. Tonight I leave the WWE.” WWE physician Dr. Michael Sampson also commented, saying “John has been dealing with a large left elbow bursitis. We did an MRI which showed a partial triceps tear. Being the warrior he is, he did not want to have surgery [before SummerSlam]. After SummerSlam, John agreed with us to have surgery this week with WWE’s Dr. James Andrews. He will begin physical therapy after that.” The eleven-time former WWE Champion will be out until February at the latest.

UPDATE: WWE.com is reporting that, as of Wednesday, John Cena’s triceps surgery was a success and Cena tweeted about the surgery, commenting “Surgery went very well. Dr. Andrews has more than done his part, now I will do mine.”

How do you think John Cena’s absence will affect the WWE? Post your comments in the box below.