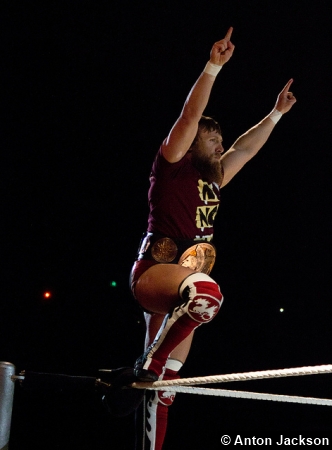 No Chance in Hell?

The 1053rd edition of WWE Monday Night RAW came to you from the Laredo Energy Arena in Laredo, TX. On a stacked card of Monday night action, WWE Champion John Cena would renew an old rivalry as “The Champ” goes one-on-one with “The Sin City Cyborg” Ryback in a Tables Match. The #1 Contender for John Cena’s WWE Championship at SummerSlam would also be in action on RAW as Daniel Bryan would go one-on-one with his former tag team partner, “The Big Red Monster” Kane! In a unique first-time meeting, “Mr. Monday Night” Rob Van Dam would go one-on-one with “The Lord of Dance” Fandango. RAW would also see World Heavyweight Champion Alberto Del Rio facing “Captain Charisma” Christian in a non-title match, The Shield facing Mark Henry and Jimmy & Jey Uso in a 6-Man Tag Match, and intense personal rivals facing off as Divas Champion AJ Lee faces Kaitlyn in a non-title match!

RAW kicks off with WWE Chairman Mr. McMahon, who is accompanied by RAW General Manager Brad Maddox, as both the show’s boss and the company’s boss make their way to the ring. After welcoming everyone to the show, the Chairman hands the microphone to Brad Maddox, who apologizes for his “bone-headed” decision to allow John Cena to select his SummerSlam opponent. Mr. McMahon then takes the microphone back, saying that the GM called Daniel Bryan a “troll” and has “psychological problems”, as well as saying that Bryan does not have the “aura of being a WWE Champion”, asking Maddox how he “really feels” about Daniel Bryan. However, before the RAW GM can answer, he is interrupted by the arrival of the #1 Contender for the WWE Title at SummerSlam, Daniel Bryan. Bryan says that the words may have come out of the mouth of Brad Maddox, but he believes they were dictated by Mr. McMahon. Maddox begins to speak, but the Chairman dismisses the GM, who exits the ring. McMahon then tells Daniel Bryan that he is showing a “lack of respect”, but Bryan argues that respect is a “two-way street”, saying that the Chairman has not given him an “ounce of respect”. McMahon then alleges that John Cena was lying when he said that Bryan “earned” the #1 Contender’s spot and that Bryan is the hottest thing in the WWE, saying that the WWE Champion has made Bryan look “foolish”, asking Bryan if he is a fool. McMahon continues, telling the #1 Contender that Daniel Bryan cannot beat John Cena and Bryan cannot even defeat Kane later tonight. McMahon tells Daniel Bryan that Bryan lacks “ruthless aggression” and that is why he cannot beat Cena before admitting that he does not want John Cena to be the WWE Champion because Cena walks around like he owns the whole company.

McMahon continues, saying that, just because he does not want Cena to be the WWE Champion does not mean that he wants the “biggest embarrassment to WWE management” to take place by having a “half-pint troll” like Daniel Bryan wearing the company’s most prestigious championship. The Chairman then says that he is the only who will “win” come SummerSlam, pitching a scenario where Cena and Bryan lock up and they both spontaneously combust, never to be seen or heard from again, saying that is what he is hoping for at SummerSlam. Daniel Bryan says that John Cena will have “hell to pay” if the WWE Champion is lying to him. Bryan then says that Mr. McMahon is always “honest” to him, but it does not matter what the Chairman thinks, it only matters what the fans think and, to him, it sounds like they want a new WWE Champion come SummerSlam. Bryan continues, telling the Chairman to listen to the WWE fans as he asks the fans if they want a new WWE Champion with the fans responding with an overwhelming “yes” chant led by Daniel Bryan!

The opening match of the night would see a 6-Man collision as The Shield, United States Champion Dean Ambrose and WWE Tag Team Champions Seth Rollins & Roman Reigns, would face the team of “The World’s Strongest Man” Mark Henry and Jimmy & Jey Uso in a 6-Man Tag match. In the end, it was Dean Ambrose hitting the Headlock Driver on Jimmy Uso en route to picking up the win for The Shield. After the match, Mark Henry would show that he is not done with The Shield as “The World’s Strongest Man” attacks all three members of The Shield, tossing them out of the ring before the trio retreats through the crowd.

In a piece of footage captured before RAW went on the air, Ryback is backstage at catering, which is where the big man decides to bully an innocent bystander, slapping the man and smashing food all over his face before lifting the smaller man up and slamming him through the catering table!

Backstage, “The Big Red Monster” Kane barges into the office of RAW General Manager Brad Maddox, demanding to know where The Wyatt Family is. However, the GM tells Kane that he does not know where they are at, but suggests that Kane use his match against Daniel Bryan to “send a message” to The Wyatt Family.

In an emotionally-charged non-title match, RAW would see Divas Champion AJ Lee, with Big E. Langston in her corner, going one-on-one with the former champion, Kaitlyn. In the end, it was Kaitlyn catching AJ Lee with the Spear, pinning the Divas Champion to pick up the win. After the loss, the Divas Champion throws a tantrum, screaming and pounding the mat, but things would get worse for AJ Lee when her ex-boyfriend, Dolph Ziggler, comes out! “The Show-Off” congratulates AJ Lee on her loss, saying that she can cry on Big E. Langston’s shoulder and, later, Langston can cry on AJ’s shoulder because he wants a match with Big E. Langston right now!

After taking Damien Sandow’s Money-in-the-Bank briefcase and tossing it into the Gulf of Mexico on SmackDown, Cody Rhodes was in action on RAW as the second-generation star would go one-on-one with Wade Barrett. In the end, it was Cody Rhodes hitting the Cross Rhodes on Wade Barrett en route to picking up the win. After the match, a livid Damien Sandow comes out, telling Cody Rhodes that he has “filed a complaint” with WWE management about Rhodes’ actions on SmackDown. Sandow continues, saying that he comes from a “family of scholars”, while Rhodes comes from a “family of clowns”, saying that “carny folk” are beneath him, backing off from a potential fight with Cody Rhodes.

In his first appearance since being laid to waste by The Wyatt Family three weeks ago on RAW, “The Big Red Monster” Kane would go one-on-one with his former friend and former tag team partner in the #1 Contender for the WWE Title, Daniel Bryan. At the end of a back-and-forth match, it was Daniel Bryan countering an attempted chokeslam by Kane into a roll-up, surprising “The Big Red Monster” to pick up the win. After the match, an angry and frustrated Kane would take out his frustrations on Daniel Bryan with a thunderous chokeslam!

After Daniel Bryan exits the ring, Kane would get his wish as The Wyatt Family descends upon RAW as Bray Wyatt leads Luke Harper & Erick Rowan to the ring. Surrounded by Luke Harper & Erick Rowan, Kane would slide out of the ring, intent on taking out the head of the trio, Bray Wyatt. However, Harper & Rowan would quickly rescue their leader, attacking Kane and rolling him back into the ring and, despite a flurry of offense from Kane, Harper & Rowan would overwhelm Kane, leaving “The Big Red Monster” at Bray Wyatt’s mercy as Wyatt enters the ring, planting Kane with his vicious twisting neckbreaker! Wyatt then speaks to his victim, saying that Kane likes to refer to himself as “The Devil’s Favorite Demon”, but Kane is “no demon” and Kane ought to be careful who he says those things in front of because you “never know who might be listening”.

Following a confrontation earlier in the day where Brie Bella called Natalya an “ugly duckling”, Natalya would face Brie Bella on RAW. During the match, Natalya would go for the Sharpshooter on Brie Bella, but Brie’s sister, Nikki, would come out using a duck call to distract Natalya long enough for Brie to catch Natalya with a roll-up for the win.

Backstage, WWE COO Triple H confronts his father-in-law, Mr. McMahon, asking if the Chairman is done pulling the strings for Brad Maddox and running down Daniel Bryan. McMahon says that all he wants is someone who can beat John Cena, someone like Triple H, but someone who is “twenty-three years younger”! This brings in Stephanie McMahon, who pitches a “corporate makeover” for Daniel Bryan. The Chairman scoffs at the idea, wishing his daughter good luck while Triple H reluctantly admits that it’s “worth a shot”!

Then it was time for the main event as, just a few weeks before he defends the WWE Title against Daniel Bryan at SummerSlam, WWE Champion John Cena would go one-on-one with “The Sin City Cyborg” Ryback in a non-title Tables Match, where the only way to win is by putting your opponent through a table. During the match, Ryback would send John Cena into the steel ring post on the outside before charging at the WWE Champion with a table, but Cena would narrowly move out of the way and the table would break in half over the ring post! Later on in the match, John Cena would narrowly avoid getting put through a table by Ryback before both men pick up the top halves of the steel steps with both Superstars standing off, which ends with both men tossing their respective steel steps at each other. Shortly after this, Ryback would set a table up in the corner of the ring, but John Cena would dodge a charging Ryback, hoisting Ryback up on his shoulders before driving him through the table with the Attitude Adjustment to pick up the win. After the match, Daniel Bryan would come out to ringside and, unknown to Cena, Bryan would grab the WWE Title belt and slide into the ring. Cena then turns around, ready to fight Bryan, but Bryan feigns handing the title belt over to Cena, so Cena snatches the belt out of Bryan’s hands, telling Bryan that he will have to “earn” the title!