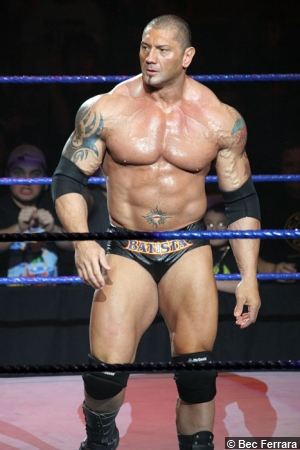 WrestleZone.com is reporting that former WWE and World Heavyweight Champion Dave “Batista” Bautista is currently in talks with Triple H about a potential, short-term return to the WWE similar to what WWE is doing with Brock Lesnar, Chris Jericho, & Rob Van Dam. Triple H and Batista have been discussing creative ideas to stage Batista’s return to the company, which could last anywhere from 90 to 180 days.

Batista has not been seen in the WWE since the May 24, 2010 episode of RAW where he “quit” the WWE following a loss to WWE Champion John Cena in an “I Quit” Match at that year’s Over The Limit pay-per-view. In reality, “The Animal” opted to finish up his obligations to the WWE so he could pursue an acting and MMA career. During his initial WWE run from 2002- 2010, Batista was a six-time World Champion, having won the WWE Championship twice and the World Heavyweight Championship four times. Batista was also the winner of the 2005 Royal Rumble Match and is a four-time tag team champion, having held the World Tag Team Titles on three separate occasions with Ric Flair (twice) and once with John Cena, as well as a reign with Rey Mysterio as the WWE Tag Team Champions.

Would you be interested in seeing Batista return to the WWE? Post your comments in the box below.