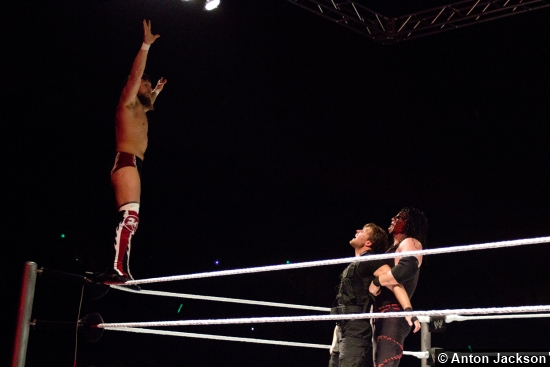 The 719th edition of WWE Friday Night SmackDown came to you from the Rexall Place in Edmonton, Alberta, Canada. After successfully defending his United States Title against Kofi Kingston on RAW, United States Champion and member of The Shield, Dean Ambrose, would be looking to step up his competition as Ambrose would go one-on-one with one of the many targets of The Shield in the nine-time former World Champion “The Viper” Randy Orton in a non-title match. Also, a little over two weeks before he challenges John Cena for the WWE Championship in a Three Stages of Hell Match at WWE Payback, the destructive and remorseless Ryback would go one-on-one with Kofi Kingston on SmackDown!

With all three members of The Shield set for action on SmackDown, the show kicks off with WWE Tag Team Champion Seth Rollins, with Roman Reigns in his corner, going one-on-one with “The Big Red Monster” Kane, with Daniel Bryan in his corner. During the match, Roman Reigns would get on the ring apron and Kane would knock him off of the apron, but Seth Rollins would take advantage with a kick to Kane’s head. However, with the referee distracted by Roman Reigns, Daniel Bryan would shove Seth Rollins off of the top rope, allowing Kane to plant Rollins with the chokeslam en route to picking up the win!

Immediately after Kane picks up the win over Seth Rollins, the other half of the WWE Tag Team Champions, Roman Reigns, with Seth Rollins in his corner, would go one-on-one with the other half of Team Hell No, Daniel Bryan, with Kane in his corner. During the match, Daniel Bryan would lock in the No Lock on Roman Reigns, but Seth Rollins would help Reigns get to the bottom rope and Kane would respond by dispatching Rollins with an uppercut on the outside! Reigns would then shove Kane from within the ring and Kane would respond with a right hand to Reigns, but, unfortunately for Kane, the referee would spot the right hand and would call for the disqualification, giving Reigns the win. After the match, an argument breaks out between Kane and Daniel Bryan in the ring with Daniel Bryan shouting at Kane, “You don’t think I can do it” and the argument continues as Team Hell No heads to the back.

“The Intellectual Savior of the Masses” Damien Sandow appears on SmackDown, saying that he tried to teach Sheamus last week, but he left Sheamus “dumbfounded”, saying that, when it comes to intelligence, he is “The Great One”. Sandow then gestures to three cups, saying he has a shell game set up, where he will place a red ball under one of the three cups and “anyone with common sense” will be able to select the correct cup. Before Sandow can continue his explanation, Sheamus interrupts, saying that Sandow could not “leave well enough alone” and now Sandow is out there playing with his “cups and tiny balls”! Sheamus then vows to put an end to Sandow’s “charade” once and for all by beating Sandow’s challenge. Sandow then goes through the shell game, re-arranging the cups before asking Sheamus to pick the correct cup that has the ball under it. After some time, Sheamus picks the cup, but there is no ball underneath and Sandow says that Sheamus’ “idiot license” is good for another year. Sandow then says that, since he “likes” Sheamus, he is going to “dimwitify” the shell game and give Sheamus a second chance, allowing “The Celtic Warrior” to pick from the remaining two cups. However, Sheamus again picks the wrong cup and Sandow is ready to bring an end to the challenge, but Sheamus insists that he will not be happy until Sandow shows him and the world that the red ball is under the one remaining cup. Sandow tries to talk his way out of it, but Sheamus snatches the cup away and as the crowd chants “show your balls”, Sheamus lifts the cup to reveal that the ball was not under any of the cups! Sheamus would toss the cups at Sandow before tossing the table to the side and dropping “The Intellectual Savior of the Masses” with the Brogue Kick!

Before his client, Curtis Axel, would go one-on-one with Sin Cara, Paul Heyman says that, the fact is, when he talks about his clients, he always tells the “truth”. Heyman continues, saying that what Curtis Axel has accomplished in his first two weeks as a “Paul Heyman guy” has been “unprecedented”. Heyman then says that, since the SmackDown crowd has no respect for him, he will allow Curtis Axel to talk about his accomplishments. Axel says that, combined, John Cena and Triple H have won twenty-six championships and he beat Triple H so badly that he was unable to continue the match and he forced Cena to “intentionally” get counted out against him on RAW. Axel then says that, when you are a “Paul Heyman guy”, life is “perfect”.

In a rematch from last week’s SmackDown, the newest “Paul Heyman guy”, Curtis Axel, with Paul Heyman in his corner, would go one-on-one with Sin Cara. In the end, it was an easy victory for the third-generation star as Curtis Axel hits the Perfect Plex on Sin Cara, picking up the win over the high-flyer.

In their on-going rivalry, the #1 Contender for the World Heavyweight Title, Alberto Del Rio, with Ricardo Rodriguez in his corner, would go one-on-one with Big E. Langston, with AJ Lee in his corner. During the match, Alberto Del Rio would fall to the outside and AJ Lee would take the opportunity to gouge the eyes of Del Rio! Big E. Langston then shoves Del Rio face-first into the steel ring post before rolling Del Rio back into the ring, hitting the Big Ending on Del Rio en route to picking up the win over the #1 Contender!

With his Three Stages of Hell Match against John Cena just two weeks ago at WWE Payback, “The Sin City Cyborg” Ryback would go one-on-one with Kofi Kingston. After a brief flurry by Kofi Kingston early on, Ryback would take it to Kofi, dropping Kingston with Shell Shocked en route to picking up the win. However, Ryback was not happy with just defeating Kofi Kingston as Ryback heads to the outside, bringing a table into the ring and setting up. Ryback then hoists Kingston up and drives him through the table with a powerbomb! The #1 Contender for the WWE Title then takes things too far as Ryback sets up a second table, driving Kofi through a table with a powerbomb for the second time! The remorseless monster then gets a third table as Ryback drags a motionless Kingston over to the third table, putting the helpless high-flyer through the third table! Ryback finally leaves the ring as a referee and EMT rush into the ring to tend to the severely injured Kofi Kingston.

Before he faces the returning CM Punk in Punk’s hometown of Chicago in two weeks at WWE Payback, Canada’s own “Y2J” Chris Jericho would go one-on-one with Cody Rhodes on SmackDown. In the end, it was Chris Jericho locking in the Walls of Jericho on Cody Rhodes, making Rhodes tap out to pick up the win.

Then it was time for the main event as, in Dean Ambrose’s toughest test to date, the United States Champion and member of The Shield would go one-on-one with nine-time World Champion “The Viper” Randy Orton in a non-title match. During the match, Randy Orton would set up for the RKO on Dean Ambrose, but the United States Champion would roll out of the ring and that is when Seth Rollins & Roman Reigns would strike, attacking “The Viper”, joined shortly by Dean Ambrose. However, Team Hell No would rush out to the rescue and, with Kane and Orton down on the outside, Daniel Bryan would single-handedly take down The Shield! Fueled by his desire to not be the “weak link” of Team Hell No, Daniel Bryan would take it to Seth Rollins, drilling Rollins with right hands before popping him with a German suplex. Bryan then takes out both Rollins & Ambrose with knees to the face before diving on top of Roman Reigns on the outside, taking Reigns out. Back in the ring, Daniel Bryan knocks Dean Ambrose down again, finishing the fight off by diving onto both Ambrose & Rollins on the outside! Back in the ring, Kane and Randy Orton would applaud Daniel Bryan’s actions and both men would raise the hands of the reinvigorated Daniel Bryan!