Last week Arnold Schwarzenegger tweeted that he’ll be inducting Bruno Sammartino into the WWE Hall of Fame, making him the first person confirmed to be making an induction at the 2013 ceremony. In this article, we’ll look at our choices for who should induct the other inductees that have been announced to far.

(Since this article was written, Terry Funk was indeed chosen to induct Mick Foley, but Maria Menounos was chosen to induct Bob Backlund. It is also heavily rumoured that Lita will, indeed, be inducted Trish Stratus.)

Mick Foley Should Be Inducted By: Terry Funk

Funk, a veteran of the American hardcore scene, was responsible for introducing Foley to the death match style that would make him famous, with the two feuding together in Japan, in some of the most brutal matches in wrestling history. The two also feuded in ECW, before teaming up in the WWE where Funk was known as Chainsaw Charlie. The team of Cactus Jack and Chainsaw Charlie sided with Steve Austin in his feud against D-Generation X and the New Age Outlaws, making them one of the most popular baby-face tag teams of the time. Funk and Foley appeared against each other in opposing teams at the second ECW One Night Stand in 2006.
Funk and Foley were one time WWF Tag Team Champions together.

Who Should’t Induct Him? Ric Flair

Bob Backlund Should Be Inducted By: Bret Hart 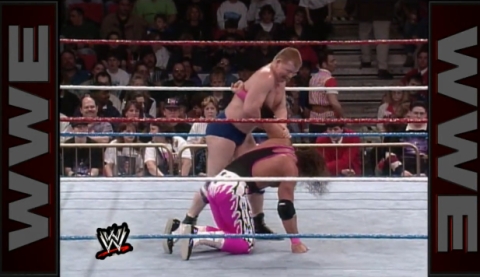 Backlund and Hart feuded during the mid-nineties, in an angle seen by many as Backlund’s last great feud. At the 1994 Survivor Series, Backlund defeated Hart to win his last WWF Championship, and their feud eventually peaked in one of the semi-main events of WrestleMania XI, when Hart defeated Backlund in an I Quit Match.

Who Should’t Induct Him? Kurt Angle

Trish Status Should Be Inducted By: Lita

The rivalry between Stratus and Lita is, arguably, the greatest feud in the history of women’s wrestling. In Trish’s first ever WWF match, she teamed with Test and Albert to defeat the team of Lita and The Hardy Boys, and, in her retirement match at Unforgiven 2006, she defeated Lita in a one on one match. The two also squared off (in a triple threat match also involving Jazz) for the semi-main event at WrestleMania X8 in Stratus’ hometown of Toronto, Canada.

Who Should’t Induct Him? Any Woman Currently In The WWE

Donald Trump Should Be Inducted By: Vince McMahon

Trump has been a long standing supporter and ally of McMahon. Both WrestleMania IV and WrestleMania V were held in buildings owned by Trump, he hosted McMahon’s failed side project, the World Bodybuilding Federation, he made an appearance at WrestleMania XX, managed Bobby Lashley at WrestleMania 23 as part of a feud with McMahon (a match that ended in Trump shaving McMahon’s head), and was in involved in a angle that saw him “buy” the WWE in 2009, which lead to a run for free prizes, commercial-free RAWs and celebrity hosts. Perhaps more than any other celebrities, McMahon owes a debt to Trump, and it would be nice to see him pay that debt in person.

Booker T Should Be Inducted By: Stevie Ray

For over a decade, Booker T, and his real-life brother, Stevie Ray, teamed up under various names; The Huffman Brothers, The Ebony Experience, The Ghetto Blasters, and, most iconically, Harlem Heat. From 1993 to 2000, Harlem Heat dominated the tag team division of WCW, winning the WCW World Tag Team Championship ten times, more than any other team in the company’s history. The pairing were voted Tag Team of the Year twice by Pro Wrestling Illustrated, and the same magazine labeled them one of the best tag teams of all time in 2003. Booker T and Stevie Ray still work together to this day, running the Booker T and Stevie Ray Pro-Wrestling Academy in Houston, Texas.

Who Should’t Induct Him? Batista

That’s my picks. Tell us who you think should (or shouldn’t) induct each of this year’s Hall of Famers in the comment section below.