By Stephen Ashfield
WWE DVD Reviews
This page contains affiliate links. At no additional cost to you, we may earn a commission if you click through and make a purchase. Learn more

How about wallowing in six hours of pure nostalgia watching some of the great WWE stars you either watched as a kid, or have spent hours looking at in great videos from the past? On the eve of Wrestlemania XX, WWE held their latest Hall of Fame inductee ceremony and this excellent video/DVD from Silver Vision celebrates that evening. Now before the review, a few words have to be written about the actual WWE Hall of Fame. 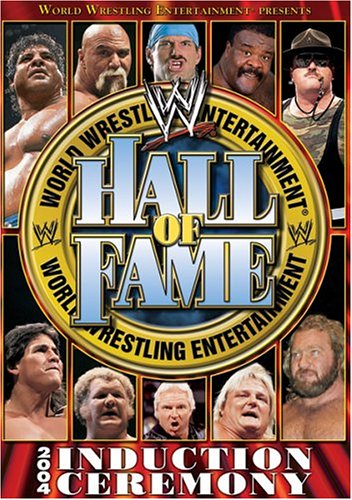 It may include such legends as Andre the Giant, Freddie Blassie, Pedro Morales and The Fabulous Moolah but there are some notable exceptions. Roddy Piper, Hulk Hogan, Bruno Sammartino and Bret Hart to name just four. You see the problem is to get in the Hall of Fame you don’t just have to be the kind of wrestler Randy Orton would love to pin, you have to be on speaking terms with Vince McMahon. Take Superstar Billy Graham for example, he talks about problems he had with Vince and how he apologised and was accepted back into the WWE family. Now if that hadn’t happened do you think he’d be in the Hall of Fame now? Course not, anyway rant over, on with the review.

There are many emotional moments in this ceremony. Billy Graham talking about the fatal road accident that led to his receiving a new liver, the children of Big John Studd and Junkyard Dog receiving the accolade in the place of their deceased parents and of course Bobby Heenan.

Heenan steals the show totally. It’s sad to see him appear as a shadow of his former self as far as appearance and voice goes, and he gets a standing ovation when talking about his fight against throat cancer. But despite the loss of weight and clarity in his voice (probably the only thing stopping Heenan returning to WWE in some capacity) he’s still one of the funniest guys around. The moment when he gets bleeped for mentioning the WWF and then ranting on about all the animals in the company (snakes, bulldogs and of course a weasel) is hilarious.

Of the others inducted into the Hall of Fame, there’s Jesse ‘The Body’ Ventura showing just why he became a politician as he speaks non-stop for over ten minutes. Ric Flair, one of many current WWE stars making introductions (others include Triple H, Shawn Michaels and Kane), speaks for all of those who started wrestling long before the days of sports entertainment, as he pays tribute to Harley Race, and there’s the first ever celebrity inductee, Pete Rose who recalls his days getting squashed by Kane. There’s also Sgt. Slaughter, Tito Santana, Don Muraco ang Greg Valentine, who looks as if he ate the entire buffet beforehand.

Extras on the DVD are fantastic. Again Heenan steals the show with some of his funniest moments and a great recollection of his first night in the business. Classic matches are Billy Graham winning the WWF title from Bruno Sammartino, an alley fight between Sgt Slaughter and Pat Patterson with commentary from the pair and Jesse ‘The Body’ Ventura against Bob Backlund.