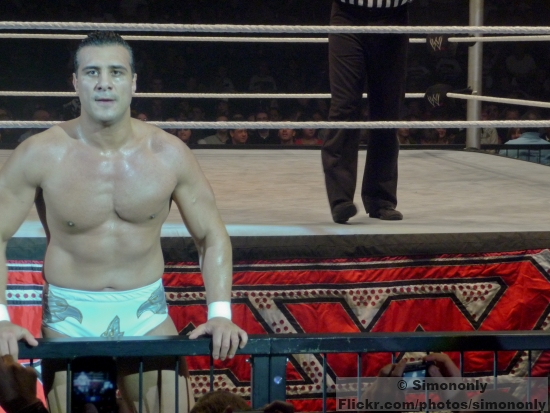 Five nights after WWE Elimination Chamber, the 705th edition of WWE Friday Night SmackDown came to you from the Mississippi Coast Coliseum in Biloxi, MS. Sunday’s Elimination Chamber event set the tone for WrestleMania 29 as Alberto Del Rio forced Big Show to tap out to the cross armbreaker to successfully retain the World Heavyweight Championship and, later that same night, Jack Swagger surprised everyone by defeating five former World Champions inside the Elimination Chamber to earn his spot as the new #1 Contender for the World Heavyweight Title with a title shot on the grand stage of WrestleMania. On RAW, “The Real American” Jack Swagger, along with his mentor, Zeb Colter, delivered his “State of the Union Address”, where they accused the World Heavyweight Champion, Alberto Del Rio, of entering the country illegally and taking advantage of America and, on SmackDown, Del Rio would offer his rebuttal to Swagger’s address.

Five nights after forcing Big Show to tap out to the cross armbreaker at Elimination Chamber to successfully retain the World Heavyweight Title, SmackDown kicks off with World Heavyweight Champion Alberto Del Rio, along with Ricardo Rodriguez, as Del Rio would address the new #1 Contender for his title at WrestleMania, Jack Swagger. Del Rio proclaims that, since he retained his title on Sunday, he is going to WrestleMania where he will defend the title against Jack Swagger. Del Rio continues, saying that Swagger has a “new attitude” and that Swagger feels that immigrants are taking opportunities away from Americans. The World Heavyweight Champion argues that America was built by the hard work of immigrants and his title is the “American dream”, calling Swagger a “real jackass”. Del Rio says that, if Swagger thinks that immigrants are looking for handouts, then Swagger should come out there so he can lay him out with a hand to Swagger’s face! However, “The Viper” Randy Orton comes out instead, telling the World Heavyweight Champion that he is going to do his best to keep “calm”. Orton says that his opportunity to challenge for the World Heavyweight Title at WrestleMania was “taken” from him at Elimination Chamber and he wants to take out his anger and frustrations on the man who beat him on Sunday, Jack Swagger. Orton then tells Del Rio to “step aside”, saying that if he has to go through the champion to get to Swagger, then he will do so. SmackDown General Manager Booker T then comes out, saying that he had a different plan in mind, announcing that, in a Champion vs. Champion Match, World Heavyweight Champion Alberto Del Rio will face Intercontinental Champion Wade Barrett. Booker also grants the wish of “The Viper”, announcing that Orton and Swagger will go one-on-one on SmackDown!

It was announced during SmackDown that next week’s show will be a special Social Media SmackDown, where the WWE fans will be able to vote, interact, and connect with the show via WWE.com, Facebook, Twitter, Tout, & YouTube!

After twice failing to defeat The Shield in 6-Man Tag action at Elimination Chamber and on RAW, “The Celtic Warrior” Sheamus would go one-on-one with “The Intellectual Savior of the Masses” Damien Sandow in the opening match of the night. In the end, it was Sheamus blasting Damien Sandow with the Brogue Kick en route to picking up the win.

The Divas were in tag team action on SmackDown as Divas Champion Kaitlyn teamed with Layla to face Tamina Snuka & Aksana. In the end, it was Kaitlyn hitting Tamina Snuka with the Spear en route to picking up the win for herself and Layla.

After getting caught off-guard with a roll-up that secured Jack Swagger’s spot for WrestleMania, Randy Orton would be looking for payback as “The Viper” went one-on-one with “The Real American” Jack Swagger, with Zeb Colter in his corner. During the match, Randy Orton was set to deliver the RKO to Jack Swagger, but Zeb Colter would pull Swagger to the apron of the ring and, shortly after this, Swagger was able to sneak a thumb to the eye in on Orton. Swagger then hangs Orton up on the top rope before rolling “The Viper” up to pick up the win.

“The Awesome One” was in action on SmackDown as The Miz went one-on-one with Cody Rhodes. In the end, it was The Miz locking in the Figure-Four Leg Lock on Cody Rhodes, forcing Rhodes to tap out to pick up the win.

Then it was time for the main event as World Heavyweight Champion Alberto Del Rio, with Ricardo Rodriguez in his corner, would go one-on-one with Intercontinental Champion Wade Barrett in a non-title Champion vs. Champion Match. Before the match began, Jack Swagger and Zeb Colter would come out, watching the match from the staging area. Despite Jack Swagger’s best attempt to cost Del Rio the match, the World Heavyweight Champion was able to survive, countering Wade Barrett’s Bull Hammer Elbow into the cross armbreaker, forcing Barrett to tap out to pick up the win over the Intercontinental Champion!