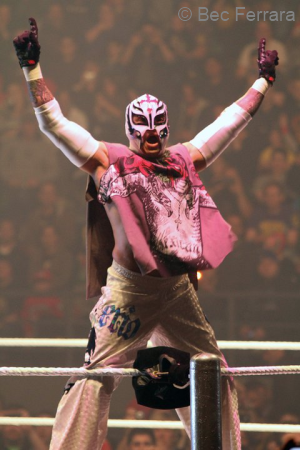 Five nights after Money-in-the-Bank, the 674th edition of WWE Friday Night SmackDown came to you from the Valley View Casino Center in San Diego, CA. After their shocking engagement on RAW and their even more shocking wedding date for the 1,000th Episode of RAW, the bride and groom-to-be, AJ and Daniel Bryan, would be the special guests on The Peep Show, hosted by Intercontinental Champion Christian!

After his surprise return to the WWE on RAW, the show kicks with San Diego’s own “Master of the 619” and three-time World Champion Rey Mysterio! Rey states that it was nearly a year ago that he was injured in that very arena and he is proud to officially announce that he is back. Rey continues that it was great to return on RAW, but the fact that he got a piece of Alberto Del Rio was even better. Mysterio is then interrupted by the arrival of “The Mexican Aristocrat” Alberto Del Rio and his personal ring announcer, Ricardo Rodriguez. Del Rio reminds Rey that he is the one who took Mysterio out and nearly ended his career. Del Rio then orders Rey to leave his ring, but Mysterio refuses and Del Rio says that he does not want to talk about Rey, he wants to talk about Sheamus and what Sheamus did at Money-in-Bank. Rey tells Del Rio that Sheamus beat his face in and Del Rio says that Rey can take comfort in the fact that his career was ended by the next World Heavyweight Champion. This brings “Mr. Money-in-the-Bank” Dolph Ziggler and Vickie Guerrero to the ring as Dolph tells Del Rio that he was going to cash in his Money-in-the-Bank contract and win the World Heavyweight Title at Money-in-the-Bank, but Del Rio ruined it. Del Rio says that he is not going to do the dirty work so that Dolph can take his title, saying that, if he wanted, both Dolph and Vickie could be working for him. Rey then suggests that, if Dolph and Del Rio have a problem, then they should “get it on”. Dolph agrees, but says that they should not be fighting each other before both Dolph and Del Rio turn in Rey’s direction. However, World Heavyweight Champion Sheamus comes out, saying it’s good to see Mysterio and threatening to toss Dolph and Del Rio in the Pacific Ocean. Just when it looks like Sheamus and Mysterio were ready to battle Dolph and Del Rio, Del Rio makes a quick exit, leaving Dolph alone with Sheamus and Mysterio. Sheamus got a shot in on Ziggler, but, thanks to Vickie, Dolph avoided the 619 of Rey Mysterio.

The opening match of the night was a big 8-Man Tag Match as WWE Tag Team Champions R-Truth & Kofi Kingston teamed with Primo & Epico, with Rosa Mendes in their corner, to face The Prime Time Players, Hunico, & Camacho, with A.W. in their corner. In the end, it was a distraction by A.W. that allowed Titus O’Neil to shove Primo off of the top rope as Darren Young catches Primo with his gutbuster en route to Young pinning Primo to pick up the win for his team. After the match, an angry Big Show comes out and, while The Prime Time Players were able to dodge the giant, R-Truth, Primo, Epico, Hunico, and Camacho were not as fortunate as Big Show readies a double chokeslam on R-Truth and Epico. Kofi Kingston manages to save R-Truth and Epico by delivering Trouble in Paradise to the back of Big Show, but The Prime Time Players pick up the scraps, laying Kofi out on the outside. In the ring, Big Show knocks Camacho down with a superkick before sending Epico out of the ring. R-Truth then tries his best to battle Big Show, but the giant levels the tag champion with the W.M.D. Big Show then drills Hunico & Camacho with a vicious double chokeslam before finishing it off with the W.M.D. to Primo!

After their shocking engagement on RAW and with their wedding just a few days away on the 1,000th Episode of RAW, AJ & Daniel Bryan were guests on Christian’s Peep Show. The Intercontinental Champion first asks the couple how the wedding planning is going with Bryan saying that, for only having a week to plan, it is going pretty well before AJ shows a romantic montage of the couple making their plans. Christian then asks Bryan if he is sure that he wants to marry AJ and Bryan says “yes”, also asking AJ if she forgives Bryan for all that he has done to her and she also says “yes”. Christian then polls the fans, who overwhelmingly say “no” to the wedding of AJ & Daniel Bryan. “Captain Charisma” then asks AJ if she has “any idea” what she is doing and AJ answers by slapping Christian across the face! Just as the couple was ready to walk out of The Peep Show, Christian reminds Daniel Bryan that he has a match against a “psychotic ex-boyfriend” of AJ’s, which is revealed to be none other than Kane!

Three nights before he marries AJ on the 1,000th Episode of RAW, Daniel Bryan would go one-on-one with the psycho ex-boyfriend of AJ, “The Big Red Monster” Kane! During the match, Kane was getting the better of Daniel Bryan when Bryan’s fiancée, AJ, jumped into the ring and onto the back of Kane, ending the match via disqualification! Bryan then delivers a couple of shots to Kane, but Kane was still able to deliver a chokeslam to Bryan even with AJ on his back. AJ then spins around and finds herself in the arms of Kane and the two exchange looks before Bryan pulls AJ out of the ring!

After being pummeled by the likes of Vader, Diamond Dallas Page, Sid Vicious, and Rikishi, “The One Man Band” would try his hand at defeating a legend as Heath Slater went one-on-one with none other than one-half of the Hall of Fame tag team, The Legion of Doom, Road Warrior Animal! In the end, it was Road Warrior Animal hitting a jumping elbow drop on Heath Slater en route to picking up the win.

Then it was time for the main event as “Mr. Money-in-the-Bank” Dolph Ziggler, with Vickie Guerrero in his corner, teamed with “The Mexican Aristocrat” Alberto Del Rio, with Ricardo Rodrigues in his corner, to face the team of World Heavyweight Champion Sheamus and San Diego’s own “Master of the 619” Rey Mysterio. During the match, Ricardo Rodriguez would interfere, causing the disqualification, but Alberto Del Rio would seize the opportunity to strike, locking in the cross armbreaker, refusing to relinquish the hold until referees come out and force Del Rio to let go. Del Rio then storms off and, just when it looks like Dolph Ziggler was going to cash Money-in-the-Bank in for his guaranteed World Heavyweight Title shot, Rey Mysterio intervenes, hitting the 619 on Ziggler, setting Dolph up for the Brogue Kick from Sheamus, preventing the cash in!