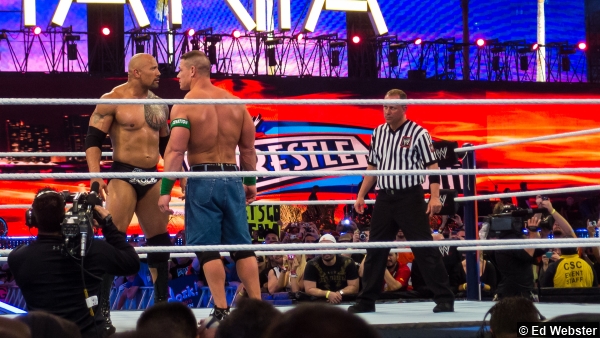 For the twenty-eighth year, World Wrestling Entertainment presents the grandest and most epic event in all of sports and entertainment has finally arrived as WrestleMania XXVIII came to you, live, from the Sun Life Stadium in Miami, FL. In a match more than a year in the making, legendary Superstar-turned-actor Dwayne “The Rock” Johnson would return to his hometown of Miami to go to war with his iconic rival, John Cena, in the epic “Once in a Lifetime” Match that the world will be watching.

Three iconic Superstars, two parallel careers, and one demonic structure will bring forth the “End of an Era” as “The Game” Triple H will square off with “The Phenom” The Undertaker, who puts his undefeated WrestleMania streak on the line like never before, inside Hell in a Cell with Hall of Famer Shawn Michaels in the middle of it all as the Special Referee.

After transforming a match about who is the true “best in the world” into something much more personal, the world would see if Chris Jericho’s mind games would pay off as Jericho challenges an irate CM Punk for the WWE Championship.

By hook or crook, Daniel Bryan has survived the last three months with his World Heavyweight Title intact, Bryan would face his toughest challenge to date as he defends the World Heavyweight Championship against the winner of the 2012 Royal Rumble Match, “The Great White” Sheamus on the grandest stage of them all.

After weeks of embarrassing Big Show over Show’s less-than-stellar performances at past WrestleMania events, Cody Rhodes faced the wrath of an angry giant with his gold on the line as Rhodes defends the Intercontinental Championship against “The World’s Largest Athlete” Big Show.

Last year, Kane lost to Randy Orton in a Street Fight and, after the match, Kane actually shook the hand of Orton, but a lot has changed since then and “The Big Red Monster” has been resurrected and has targeted Randy Orton as the man responsible for making him experience a moment of humanity and now these two unbalanced Superstars face off as “The Big Red Monster” Kane goes one-on-one with “The Viper” Randy Orton.

Over the last couple of months, the Interim General Manager of RAW John Laurinaitis has been on a personal quest to gain control of both RAW and SmackDown, but SmackDown General Manager Theodore Long wants the exact same thing and, now, the two General Managers will pit their two teams against each other as Laurinaitis has selected his personal lawyer, David Otunga, as the captain of Team Johnny, to be joined by “The World’s Strongest Man” Mark Henry, “The Show-Off” Dolph Ziggler, “The All-American American” Jack Swagger, former WWE Champion The Miz, and former Intercontinental Champion Drew McIntyre to go to war against Long and Team Teddy, who is captained by United States Champion Santino Marella, who will be joined by R-Truth, Kofi Kingston, “The Long Island Iced Z” Zack Ryder, “The Punjabi Giant” The Great Khali, and six-time World Champion Booker T as Team Johnny faces Team Teddy in a 12-Man Tag Match with the winning team earning complete control of both RAW and SmackDown for their team’s namesake.

Also, after barging in during an interview with Kelly Kelly on EXTRA, Eve and Divas Champion Beth Phoenix would face Kelly Kelly and her tag team partner, the host of EXTRA, Maria Menounos.

In addition to all these extraordinary matches, WWE.com and YouTube would present a half-hour WrestleMania pre-show featuring the WWE Tag Team Titles being defended as Primo & Epico would defend the titles against Jimmy & Jey Uso and the newly formed team of Tyson Kidd & Justin Gabriel in a Triple Threat Tag Match.

Before WrestleMania XXVIII went live on pay-per-view, WWE.com and YouTube hosted a special half-hour WrestleMania pre-show featuring the WWE Tag Team Titles being defended as Primo & Epico, with Rosa Mendes in their corner, defended the gold against Jimmy & Jey Uso and the new team of Tyson Kidd & Justin Gabriel in a Triple Threat Tag Match. In the end, it was Jimmy Uso hitting the Superfly Splash on Justin Gabriel, but Primo pulls Jimmy Uso off of the pin attempt, hitting the BackStabber on Uso en route to picking up the win for himself and Epico, successfully retaining the WWE Tag Team Titles in a high-flying pre-show match.

After vowing to make Randy Orton pay for making him experience a small measure of humanity, “The Big Red Monster” Kane went one-on-one with “The Viper” Randy Orton. During the match, Randy Orton went for the career-threatening punt to the skull, but Kane recovers, drilling Orton with a chokeslam, but Orton manages to kick out! Shortly after this, Randy Orton meets Kane on the top rope with sinister intentions, but Kane grabs Orton by the throat, hitting a chokeslam from the second rope on Orton en route to picking up the win!

With Team Johnny supporter, Brie Bella, introducing the team, The Miz, Mark Henry, Drew McIntyre, Jack Swagger, Dolph Ziggler, and team captain David Otunga make their way to the ring before Team Johnny is joined by their team’s namesake, Interim RAW General Manager John Laurinaitis, and the official flag bearer for Team Johnny, Vickie Guerrero. Team Teddy supporter, Nikki Bella, then introduces Kofi Kingston, The Great Khali, R-Truth, Zack Ryder, with Eve in his corner, Booker T, and team captain Santino Marella then make their way to the ring as Team Teddy mascot, Hornswoggle, comes out, followed by SmackDown General Manager Theodore Long and his girlfriend, Aksana, as Team Teddy and Team Johnny go head-to-head in a 12-Man Tag Match with the winners earning their respective GM complete control of both RAW and SmackDown. During the match, the majority of the Superstars in the match were down on the outside of the ring before Aksana and Vickie Guerrero get into an argument, which leads to Aksana tackling Vickie, pummeling Vickie until The Bella Twins break it up. Shortly after this, Zack Ryder looked to have things in control as only he and The Miz remained in the ring, but when Eve enters the ring, Ryder becomes distracted long enough for Miz to take advantage, hitting the Skull Crushing Finale on Ryder en route to picking up the win for Team Johnny, earning John Laurinaitis total control of both RAW and SmackDown! After the match, Eve would appear sympathetic for Zack Ryder, but would deliver a low blow, in more ways than one, to Ryder! How will the landscapes of both RAW and SmackDown change now that John Laurinaitis has total control of both shows?

Moments before he is set to defend the WWE Title against Chris Jericho, WWE Champion CM Punk is confronted by the new General Manager of both RAW and SmackDown, John Laurinaitis, who informs the champion that, if Punk gets disqualified in his match, then he will lose the WWE Title to Chris Jericho!

After making their championship match personal over the last few weeks, Chris Jericho would challenge CM Punk for the WWE Championship and, per the orders of RAW and SmackDown General Manager John Laurinaitis, if Punk gets disqualified, he loses the WWE Title. Knowing full well what the stipulation of the match is, Chris Jericho repeatedly tries to get CM Punk to lose his cool and get himself disqualified, almost driving Punk to use a steel chair on Jericho, but Punk manages to barely maintain his composure. At the end of a stellar match befitting the “best in the world”, it was CM Punk locking in the Anaconda Vise on Chris Jericho, making sure to position himself out of the way of Jericho’s knees, forcing Jericho to tap out to pick up the win and successfully retain the WWE Title.

To bring forth an iconic main event, an iconic name in hip hop and pop culture, Sean “Diddy” Combs introduces MGK and Ester Dean as they perform “Invincible”, playing John Cena to the ring. Not to be outdone, multiplatinum performer and Miami’s own Flo Rida would perform two hit songs, “Good Feeling” and “Wild Ones”, playing The Rock to the ring!

After a year of waiting and anticipation, it was finally time for the clashing of generations, the colliding of two icons, the “Once in a Lifetime” Match as ten-time former WWE Champion John Cena goes one-on-one with “The Great One” The Rock! During the textbook back-and-forth match, John Cena hits the Attitude Adjustment on The Rock, but The Rock kicks out. Rock then responds by planting Cena with the Rock Bottom, but Cena kicks out! After trying everything in his arsenal to try and defeat The Rock with no success, John Cena would take a page out of The Rock’s playbook, trying to go for the People’s Elbow, but Rock pops up, catching Cena with the Rock Bottom en route to picking up the win!

What did you think of WrestleMania XXVIII? Post your comments in the box below.