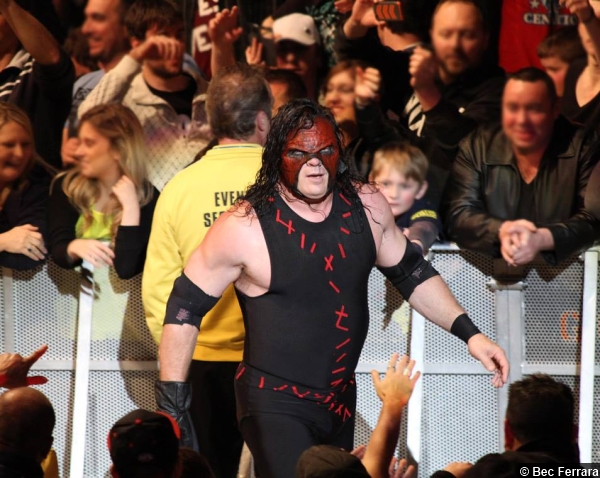 With 30 days to go until he challenges Daniel Bryan for the World Heavyweight Championship at WrestleMania, the show kicks off with the winner of the 2012 Royal Rumble Match, “The Great White” Sheamus. Sheamus states that he cannot wait for WrestleMania before saying that Daniel Bryan has become “conceded and obsessed” since winning the World Heavyweight Title and Bryan reminds him of himself. Sheamus continues that he became wrapped up in his own ego and the WWE Championship was the “greatest trophy” he could ever have had at that time. Sheamus then says that someone needs to knock Bryan’s block off and, come April 1, he will be the man to do that as he will become the new World Heavyweight Champion. Sheamus is then interrupted by the shrill voice of Vickie Guerrero, who is accompanied by Dolph Ziggler. Dolph says that no one cares about Sheamus’ story and the fans “deserve” to see him in the main event of WrestleMania and not Sheamus before Dolph accuses Sheamus’ hair of being “on fire”. Sheamus reputes that the joke is as old as Dolph’s “grandmother”, Vickie Guerrero, and Vickie shouts that she is not old, she is “experienced”. Vickie then says that her and Dolph prefer John Laurinaitis over the “bald nincompoop” known as Theodore Long. The SmackDown General Manager then interrupts to put Dolph Ziggler in a match against Sheamus!

Per the orders of SmackDown General Manager Theodore Long, the opening match of the night saw the winner of the 2012 Royal Rumble Match, “The Great White” Sheamus, go one-on-one with “The Show-Off” Dolph Ziggler, with Vickie Guerrero in his corner. During the match, Sheamus would hit his signature Irish Curse Backbreaker on Dolph Ziggler, but Vickie Guerrero would put Dolph’s foot on the bottom rope, preventing the three-count. As Sheamus appears ready to deliver the Brogue Kick to Dolph, Vickie signals for Jack Swagger before distracting the referee. However, Sheamus would blast Swagger with the Brogue Kick moments before hitting the White Noise on Dolph Ziggler en route to picking up the win.

Backstage, SmackDown General Manager Theodore Long finds Interim RAW General Manager John Laurinaitis and his legal counsel, David Otunga, in his office. Laurinaitis says that he is there for an apology from Long for shoving Laurinaitis down on RAW, a move that Laurinaitis claims injured his back. Long says he will not apologize to Laurinaitis, adding that he and the fans thought it was quite funny. Laurinaitis says that Long won’t be laughing when he is running SmackDown next week and Long argues that Laurinaitis will not be laughing when he is running RAW this Monday night before putting David Otunga in a match against “The Punjabi Giant” The Great Khali. What will happen next week when Theodore Long runs RAW and John Laurinaitis runs SmackDown?

After revealing her true, vain colors on RAW, Eve was in action on SmackDown as Eve went one-on-one with Natalya. In the end, it was Eve countering a roll-up attempt by Natalya to pick up the win.

After going out of his way to embarrass Big Show over the last couple of weeks, Intercontinental Champion Cody Rhodes appeared on SmackDown. Rhodes says that he “saved” Big Show the embarrassment of “floundering” again on the grand stage of WrestleMania. Rhodes continues that at “the big show”, Big Show is a “choke artist”. Rhodes was then set to present another embarrassing WrestleMania moment, but the Intercontinental Champion is interrupted by “The World’s Largest Athlete” Big Show, but when Big Show enters the ring, Rhodes makes a quick exit. Show asks Rhodes where he is going before saying that he can laugh at himself, trying to coax Rhodes into coming back to the ring. When Rhodes does not budge, Show starts to leave the ring to go get Rhodes, but SmackDown General Manager Theodore Long makes his way to the ring, revealing that he and Big Show had a talk and he is granting Show’s request for a one-on-one match against Cody Rhodes with the Intercontinental Title on the line at WrestleMania! On April 1 in Miami at WrestleMania, can Big Show turn his WrestleMania record around by defeating Cody Rhodes and winning the Intercontinental Title for the first time in his legendary career?

After Cody Rhodes interrupted their match last week, the rematch took place on SmackDown as “The World’s Largest Athlete” Big Show went one-on-one with “The World’s Strongest Man” Mark Henry, with Cody Rhodes a guest on commentary. Early on in the match, the fight spills to the outside where Mark Henry sends Big Show over the ringside barricade. As the referee counts, Mark Henry uncovers the steel pulley behind the turnbuckle and, when Show gets on the ring apron, Henry drives the ribs of Show into the steel. Later on in the match, Mark Henry sends Big Show spine-first into the steel ring post before narrowly missing Show’s head with the steel steps. After sustaining all of this, as well as the World’s Strongest Slam, Big Show would come out of the nowhere with the W.M.D. on Mark Henry, managing to make the cover en route to picking up the win. Can Big Show win the big one at WrestleMania and become the new Intercontinental Champion?

After giving Drew McIntyre more than enough chances to earn his keep on SmackDown, Theodore Long confronts McIntyre backstage to inform McIntyre that, if McIntyre loses his match on SmackDown, then he will be fired! Who will Drew McIntyre face and can McIntyre emerge victorious to save his job?

Then it was time for the main event as “The Viper” returns to SmackDown as Randy Orton went one-on-one with the man who took him out of action with a concussion last month, World Heavyweight Champion Daniel Bryan, with A.J. in his corner, in a non-title match. In the middle of the match, both Daniel Bryan and Randy Orton find themselves on the outside of the ring when flames erupt from the stage, signifying the arrival of Kane! As Daniel Bryan celebrates his count-out victory in the ring, Orton tries to strike first on Kane, but Kane fights back, hitting a big boot on Orton. Kane and Orton then brawl at ringside and back into the ring before Kane sends Orton shoulder-first into the ring post and planting Orton with a thunderous chokeslam! Kane then tells Orton, “Welcome back”.

Backstage, Interim RAW General Manager John Laurinaitis and his legal counsel, David Otunga, are watching the destruction just caused by Kane as Laurinaitis tells Otunga that what Kane did is “nothing” compared to the “destruction” he will cause when he is in charge of SmackDown next Friday night as Laurinaitis ponders pitting Kane against Theodore Long’s “girlfriend”, Aksana! Will John Laurinaitis really be sinister enough to book Kane vs. Aksana on next week’s SmackDown?