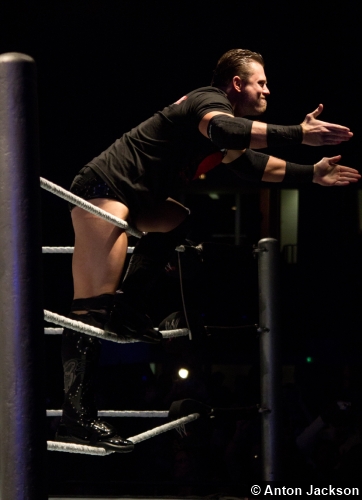 Two fired employees leave no man standing inside the Cell.

The third annual WWE Hell in a Cell came to you, live on pay-per-view from the New Orleans Arena in New Orleans, LA. On a night where the top Superstars of RAW and SmackDown go to hell, the ten-time WWE Champion John Cena steps into hell for the second time in his career as “The Champ” defends the WWE Championship against “The Mexican Aristocrat” Alberto Del Rio and “The Voice of the Voiceless” CM Punk in the first ever Triple Threat Hell in a Cell Match. After dominating Randy Orton at Night of Champions to win his first World Heavyweight Championship, “The World’s Strongest Champion” Mark Henry steps into uncharted territory as Henry defends the World Heavyweight Title against three-time Hell in a Cell competitor, “The Viper” Randy Orton. After being cost the Intercontinental Title on two different occasions by Christian, “The Great White” Sheamus would go one-on-one with “Mr. One More Match” Christian. In one of the most unique matches in recent memory, two masked men went one-on-one as “The Masked Sensation” Sin Cara looks to reclaim his identity as he squares off with his dark doppelganger who looks to become the one, true Sin Cara. After failing to win the Divas Title at SummerSlam and Night of Champions, Beth Phoenix hopes that the third time would be the charm as “The Glamazon” challenges Kelly Kelly for the Divas Championship.

Before the opening match of the night between Sheamus and Christian, two familiar faces are seen making their way through the crowd as former WWE Superstars The Miz & R-Truth make their way to the front row with tickets in hand! Despite having tickets to the event, the Executive Vice President of Talent Relations, John Laurinaitis, comes out, bringing security with him to escort Miz and Truth out of the arena.

After being cost the Intercontinental Title by Christian twice in the past week, the opening match of the night saw “The Great White” Sheamus looking for revenge as he went one-on-one with “Mr. One More Match” Christian. At the end of a hard-fought match, it was Sheamus blasting Christian with the Brogue Kick en route to picking up the win.

Then it was time for the tale of two Sin Caras to come to a head as “The Masked Sensation” Sin Cara Blue went one-on-one with his dark doppelganger, Sin Cara Black to prove who is worthy of the name, Sin Cara. At the end of a fast-paced, high-flying match, it was Sin Cara Blue hitting a sunset flip powerbomb on Sin Cara Black en route to picking up the win and reclaiming his identity as the one and only Sin Cara.

After utilizing the help of Vickie Guerrero to win their respect matches over the champions this past week, Vickie’s clients Jack Swagger and the United States Champion Dolph Ziggler challenged Air Boom, Evan Bourne & Kofi Kingston, for the WWE Tag Team Titles. At the end of a chaotic match, it was Evan Bourne countering a powerbomb attempt by Jack Swagger off of the top rope, hitting a hurrincanrana and rolling Swagger up en route to successfully retaining the WWE Tag Team Titles for Air Boom.

After back-to-back successful title defenses, by hook or crook, on RAW SuperShow and SmackDown, Intercontinental Champion Cody Rhodes made an appearance at WWE Hell in a Cell. Rhodes tells the New Orleans crowd that it’s not even Halloween yet and, if they refuse a paper bag, then they should be “figuratively euthanized”. The Intercontinental Champion then states that the current Intercontinental Title should also be “euthanized” before Rhodes places the title belt into a paper bag! Rhodes then has one of his baggers hand him a velvet bag as Cody Rhodes pulls out the classic Intercontinental Title belt before Rhodes lists some of the all-time greats who have held the white-strapped belt, such as Ricky “The Dragon” Steamboat, Bret “The Hitman” Hart, “Macho Man” Randy Savage, and Stone Cold Steve Austin! Rhodes continues that he will wear the classic belt in honor of them, but he will wear it with “more pride and more dignity” than any of them, adding that he will “defend it feverishly”. Before Rhodes can continue, he is interrupted by the Executive Vice President of Talent Relations, John Laurinaitis, who reluctantly informs the suit-clad Cody Rhodes that, per the orders of WWE COO Triple H, Rhodes will defend the Intercontinental Title right now!

Backstage, the Executive Vice President of Talent Relations, John Laurinaitis, rushes into the office of WWE COO Triple H to inform the boss that fired talent The Miz & R-Truth have found their way backstage and are assaulting Superstars in the locker room! Triple H and Laurinaitis then rush to a nearby locker room where Miz and Truth are being forced out by security as the WWE Tag Team Champions, Evan Bourne and Kofi Kingston, are laid out on the floor. As Alex Riley and Ezekiel Jackson tend to Air Boom, Triple H tells Laurinaitis that he told the EVP to get the police, not just security and, if it happens again, it’s Laurinaitis’ ass!

The Divas Title was then up for grabs as “The Glamazon” Beth Phoenix, with Natalya in her corner, challenges Kelly Kelly, with Eve in her corner, for the Divas division’s top prize. During the match, Natalya would get up on the ring apron, but Eve would drop Natalya off of the ring apron. However, the powerful Natalya fought back, sending Eve into the ringside barricade as the action continued in the ring. Shortly after this, Beth Phoenix locks in a modified surfboard submission maneuver that both her and Natalya have been using. With the submission locked in, Natalya grabs a microphone, trying to humiliate Kelly Kelly while the Divas Champion is being punished. Despite this, Kelly Kelly gets to the bottom rope, but as the referee is distracted with Beth Phoenix, Natalya blasts Kelly Kelly with the microphone. This allows Beth Phoenix to take advantage, hitting the Glam Slam en route to pinning Kelly Kelly to finally win the Divas Title.

Then it was time for the main event as, for the first time in history, ten-time WWE Champion John Cena defends the WWE Championship against “The Mexican Aristocrat” Alberto Del Rio and “The Voice of the Voiceless” CM Punk in the first ever Triple Threat Hell in a Cell Match. During a grueling match that saw CM Punk’s back lacerated before Punk was sent through a table, as well as John Cena getting suplexed on a steel chair, Alberto Del Rio’s personal ring announcer, Ricardo Rodriguez sensed Del Rio was in trouble as Rodriguez blindsides the referee with a steel pipe shot on the outside of the Cell. Rodriguez then retrieves the key to the Cell, opening the structure to try and help Del Rio out as the personal ring announcer tries to hit Cena with the steel pipe, but Cena dodges the shot before delivering the Attitude Adjustment to Rodriguez on the arena floor. However, this allows Del Rio to use the steel pipe on the mid-section of “The Champ” as Del Rio leaves Cena on the outside of the Cell before Del Rio locks it from the inside, tossing the key under the ring before turning his attention back to CM Punk! Later on in the match, John Cena helplessly watched from the outside of the Hell in a Cell as Alberto Del Rio cracked CM Punk in the skull with the steel pipe before Del Rio taunts Cena. The taunting looked like it might have cost Del Rio as Punk hoisted Del Rio up for the GTS, but Del Rio used the pipe again, this time hitting the mid-section of Punk before hitting Punk in the skull with the pipe for a second time. As John Cena watched from the outside of the structure, Alberto Del Rio pins CM Punk to regain the WWE Championship!

Furious over losing the WWE Title in such a manner, John Cena would wait for the Hell in a Cell to raise just enough for him to slide under it as the former champion hits the ring, getting a few shots in on the new champion, but two hooded individuals manage to slide into the Cell and into the ring, assaulting Cena with batons. It wasn’t long before it became clear that fired talent The Miz & R-Truth were the assailants, but having nothing to lose, the ex-employees assault two WWE referees. This heinous attack brings out WWE COO Triple H and the EVP of Talent Relations, John Laurinaitis, but as Triple H and Laurinaitis approach, the Cell is lowered again, locking them out. Triple H then sends Laurinaitis to try and get the Cell raised as Triple H is joined by the WWE locker room as Sheamus, Cody Rhodes, Alex Riley, Christian, David Otunga, Jack Swagger, Sin Cara, Daniel Bryan, Dolph Ziggler, Evan Bourne, Kofi Kingston, Ezekiel Jackson, and every available WWE talent do their best to try and break into the Cell to no avail. Meanwhile, in the Cell, Miz and Truth continue their unreal assault as the duo picks apart the referees and even the camera men! Miz and Truth then turn their attention back to John Cena as R-Truth rips a baton from CM Punk, using it on the mid-section of Cena. Miz then delivers baton shots to the mid-section of Alberto Del Rio as the sea of WWE employees continue to rip and tear at the Cell, trying to break in. As R-Truth lays out another innocent camera man inside the Cell, a crew member is finally able to locate some bolt cutters to cut the chain that was locking the Cell closed! This allows police to enter the Cell as two officers arrest the surrendering Miz and R-Truth, but as Miz and Truth are escorted out of the Cell by police, WWE COO Triple H snaps as the furious boss beats the hell out of both of The Miz and R-Truth, even decking John Laurinaitis when the EVP tries to restrain the COO! Triple H is finally restrained by two large security guards, allowing the police to finally escort The Miz and R-Truth out of the arena! After being fired by Triple H two weeks ago, The Miz and R-Truth have snapped, laying waste to new WWE Champion Alberto Del Rio, CM Punk, John Cena, not to mention referees and camera men, bringing a complete and chaotic hell to an already chaotic WWE. With The Miz and R-Truth behind bars for their ruthless and heinous assault, what steps will WWE COO Triple H take to restore some semblance of order in the WWE?

What did you think of WWE Hell in a Cell? Post your comments in the box below.