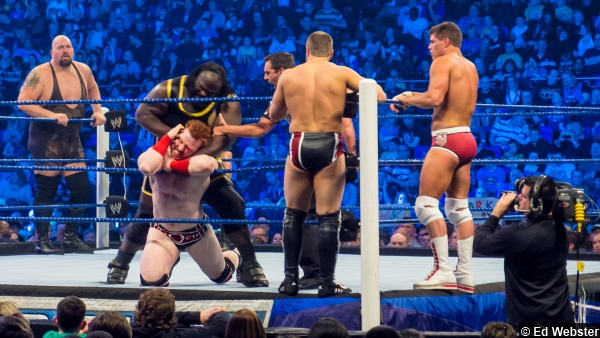 Nine nights before he challenges Randy Orton for the World Heavyweight Title at Night of Champions, SmackDown kicks off with “The World’s Strongest Man” Mark Henry. The #1 Contender states that, because he has been in the WWE for fifteen years, a lot of people think that his best years are behind him, but those people should ask Big Show and Kane, adding that they have “special wings” in the Hall of Pain. Henry continues that Randy Orton will join the Hall of Pain at Night of Champions. “The World’s Strongest Man” then states that his whole career has led him to this point as he is more “unpredictable” and more “dangerous” than ever before and, at Night of Champions, he will be the new World Heavyweight Champion.

Mark Henry is then interrupted by the Assistant to the General Manager of SmackDown, Zack Ryder and Henry tells the Assistant to the GM that Ryder must have a death wish to come out there and interrupt him. Ryder then informs Mark Henry that both Henry and Randy Orton will be in action on SmackDown before revealing that General Manager Theodore Long has made a “no contact” rule between Orton and Henry until Night of Champions, so if Orton and Henry interfere in each other’s matches, then there will be “big problems”. Ryder then tries to make a quick exit, but Mark Henry calls a nervous Zack Ryder back into the ring as Henry thanks Ryder for the heads up before Henry calls Ryder back again. Mark Henry then asks Zack Ryder who Ryder thinks will win at Night of Champions, but Ryder responds by saying that, if he says that he thinks Randy Orton will win, then Mark Henry will lay him out.

Mark Henry then tells Zack Ryder that, if he cannot put his hands on Randy Orton, then he needs to put his hands on someone else. Seeing where things were heading, Theodore Long’s Assistant tried to get the jump on Mark Henry, landing a couple of shots on the #1 Contender before “The World’s Strongest Man” knocks Ryder down before planting Ryder with the World’s Strongest Slam!

After delivering a post-match kick to the skull of Daniel Bryan on last week’s Super SmackDown Live, “The International Sensation” was in action on SmackDown as Sin Cara went one-on-one with Tyson Kidd. In the end, it was Sin Cara hitting the Sinsault on Tyson Kidd en route to picking up the win. After the match, Sin Cara takes part in his first interview as Cara explains that, now that he is in the WWE, nobody is going to stop him, adding that the “style and aggression” he has been showing is the “real Sin Cara”!

After hearing this, “Mr. Money-in-the-Bank” Daniel Bryan comes out, telling Sin Cara that, when Cara attacked him last week, it spoke a “universal language” that Sin Cara does not respect him. Daniel Bryan then states that they have a “problem” that needs rectified before challenging Sin Cara to a match next week, telling the high-flyer that he can show all the “aggression” he wants. Sin Cara responds by kicking Bryan in the mid-section and locking in Bryan’s own LeBell Lock on “Mr. Money-in-the-Bank”, making Bryan tap out! How will Daniel Bryan respond to this attack by Sin Cara? Will Sin Cara accept Daniel Bryan’s challenge to a rematch?

SmackDown was then set to see Sheamus face Wade Barrett, but Christian interrupts, stating that the rest of SmackDown will be “postponed” because Theodore Long refuses to do the “right thing”. Christian continues that, last week, he was “forced” to compete in the main event of RAW where he was double-teamed by Sheamus and John Cena, but he still “manned up” and challenged Randy Orton for the World Heavyweight Title in a Steel Cage Match on last week’s Super SmackDown Live, taking Orton to the “limit”. Christian then proclaims that he “deserves one more match”, but Christian is interrupted by Sheamus, who tells Christian that he once had a dog who had a litter of puppies and most of the litter were strong, but one puppy came out “scrawny” and “seedy looking”. Sheamus continues that the puppy developed “mange” and, whenever he “barked”, hot air came out of his “arse”. Sheamus then tells Christian that he is “out of matches”, “out of excuses”, and, right now, he is going to get “out of this ring”! Christian then does as he is told, exiting the ring so that Sheamus can get to his match.

After making Christian leave the ring, “The Great White” Sheamus would collide with Wade Barrett on SmackDown. In the middle of the match, Sheamus was in control of the match, but Christian rushes out, attacking Sheamus, which leads to a two-on-one attack by Christian and Wade Barrett. However, Sheamus manages to fight back, sending Christian out of the ring before delivering the Brogue Kick to Barrett. Christian then tried to blindside Sheamus again, but Sheamus catches Christian, trying to plant Christian with the High Cross. However, Christian escapes the move and escapes the ring, avoiding any more physicality with “The Great White”.

Before the main event, Intercontinental Champion Cody Rhodes states that he was trying to “inspire” Ted DiBiase through his success, but DiBiase was “happy being Ted”. Rhodes continues that he was not going to let DiBiase “sink” him and, when he “dropped” DiBiase, he “floated to the top”. Rhodes then states that there is a thin line between “unstable” and “thriving.”