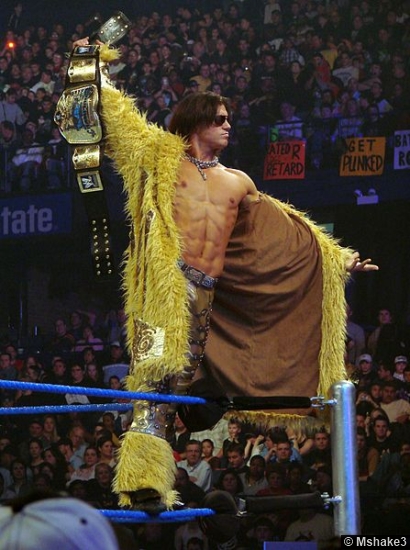 There is backstage heat on both John Morrison and Melina, reports Pro Wrestling Torch. It centers around the Six-Person Mixed Tag Team Match at Wrestlemania XXVII, which saw Morrison repeatedly brush partner Trish Stratus off.

During their post-match celebration, Stratus hugged Snooki and went to hug Morrison, but he had already turned his back on her. Morrison then led Snooki to the corner of the ring and used the Jersey Shore star as a shield, to guard himself from Stratus.

The backstory behind Morrison’s awkward body language is that either he or Melina, his girlfriend, felt Stratus took her spot in the Six-Person Mixed Tag Team Match at Wrestlemania XXVII. The backstage belief is that he either holds Stratus in contempt for taking Melina’s spot on the card, or had to portray himself as such so that she would believe he was rude to her.

Behind the scenes, Morrison rejected various ideas Stratus had for their match at WrestleMania XXVII, and was said to be very difficult to work with. His outright refusal to comply with any of her suggestions reportedly hurt her feelings. Word quickly spread amongst the locker room, garnering heat.

Many feel Morrison’s unprofessional behavior will set back his standing in WWE since Stratus is highly regarded amongst company personnel.

While Morrison is considered a nice guy, he’s not greatly respected amongst his peers. This dates back several years due to his real-life relationship with Melina. Particularly, he lost a lot of respect for allowing Melina to engage in a sexual relationship with former WWE talent Dave Bautista (a/k/a Batista) while the two were dating. The former WWE World Heavyweight Champion made no qualms of being intimately involved with Melina in his 2007 autobiography, Batista Unleashed. He wrote:

“My wife thought I was sleeping with Melina right off the bat, while we were still married. It wasn’t true, but it did make me feel guilty about being friends with her.

“Since then, as I’ve said, Melina and I have gotten closer and our relationship has become physical. That’s caused a bit of controversy, but I don’t give a shit. She’s my friend, and I love her very much.”

Former WWE stars Paul London and Brian Kendrick alleged numerous behind the scenes stories involving Melina and Morrison in their 2010 “shoot” interview, Brian Kendrick & Paul London’s Excellent Adventure. London stated that Morrison is ‘spineless’ because he repeatedly permitted Melina to engage in sexual activity with outside partners while the two were dating. He added that Morrison would accompany Melina on dates with her partner of choice. Kendrick also claimed that he himself had been intimate with Melina.

What do you think of John Morrison’s actions? Post your comments in the box below.