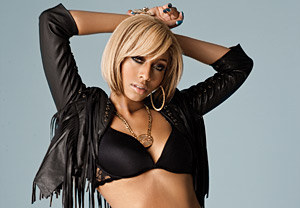 The following is from WWE.com:

The chart topping singer and Decatur, GA. native Keri Hilson is no stranger to the belting out hits as she recently performed her number one song “Pretty Girl Rock” (produced by Ne-Yo) on national television shows such as the Today Show, The Ellen DeGeneres Show, Late Show with David Letterman, and Lopez Tonight. Coming off her sophomore album “No Boys Allowed,” Hilson’s garnered choice reviews in the New York Times, USA Today and The Wall Street Journal to name a few. Her RIAA Gold Certified debut album “In A Perfect World” spawned number one hits including “Turning Me On” featuring Lil’Wayne and “Knock You Down” featuring Kanye West and Ne-Yo. The singer has scored critical acclaim winning awards and nominations from The Grammy’s, The American Music Awards, BET Awards, NAACP Image Awards, MOBO Awards and Soul Train Awards.

What do you think of Keri Hilson performing at WrestleMania? Post your comments in the box below.