WWE Over The Limit 2010 DVD Review

With the recent decision to rename a lot of the B-level PPV events to match the main stipulation of each show, causing No Way Out to become Elimination Chamber and the recent alterations/additions of TLC, Hell in a Cell, Fatal 4-Way and Money in the Bank joining with the more established Extreme Rules, Royal Rumble, Night of Champions and Survivor Series, WWE fans knew going in, even before any actual match-ups had been announced, what they were in for in regards to match types.

So it was a surprise to many when Over the Limit was announced on the PPV calendar, because for the first time in a long time, there was no “theme” to the show on which we could hang our hat. Indeed, many a discussion centred around this very topic, wondering why this show had no overriding stipulation attached. That’s not to say there wasn’t gimmick matches on the show (there were two), but in a time when ever PPV is labelled according to a gimmick, Over the Limit stood out simply because it had nothing overt to make it stand out. 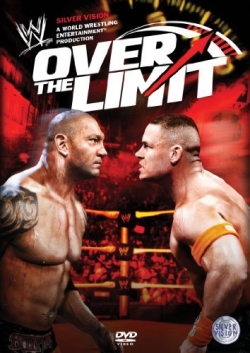 The opening video sets a nice tone for the upcoming bouts, first of which features a good friend and former training partner of mine, Drew McIntyre, as he defends his Intercontinental Championship against a wrestler who is thisclose to cracking the glass ceiling, but seems to just reach it before being pushed back by booking decisions. A high-tempo opener, this was a bit short, but both men went out stronger than they went in and Drew took another step in his evolution to becoming a top-level performer in the US.

Bad luck strikes in match #2 (and seemingly cursed the show from this point on) as Ted DiBiase suffers a legit concussion due to a forceful slap from R-Truth, meaning their match falls apart early, although both deserve credit for at least getting through it. Oh, and having Virgil back on WWE TV was a nice little nostalgia trip.

Picking things up, the next match is easily the match of the night. CM Punk’s earlier promo (before the Truth/DiBiase bout) was a master-class in backstage promo delivery. All three members of the Straight Edge Society are convincing in the conviction and Punk’s message of purity is something to behold. Unfortunately, the curse I mentioned earlier rears its ugly head in the Hair v Pledge match as Punk gets busted open and the match is stopped as the EMTs try to treat the wound. WWE’s no-blood policy is ruining a lot of wrestling matches. No blading would be one thing, but being cut for real can’t be totally avoided and needs to be accepted as an occupational hazard.

Rey and Punk go at it with gusto and the closing few minutes are as exciting a finish to a wrestling match you’ll see this year. Moves and counters, counters to the counters, near-falls and close shaves (in Punk’s case, the latter is literal), this match has everything you could want in a modern wrestling encounter. The tempo really picks up after the re-start (Punk knew they’d lost the crowd due to the ref stopping things to treat the cut, so he goes all out to get it back… and succeeds) and you get the feeling that some of the shots were intentionally stiff on both sides.

The first title match of the night is also a good outing for all four men, with The Hart Dynasty getting the rub of taking down Miz and Jericho while the heels get to show off their in-ring skills and their tour-de-force personalities. For a tag-team match, there’s not enough double-teaming or general tag-team psychology, but that’s more a problem with tag-team wrestling in WWE today rather than the teams themselves. It is nice to see an actual double-team finish being used though.

For the third time tonight, the OtL curse strikes. Edge v Orton was going at a slow, steady pace leading, I assume, to a high-octane last five-or-so minutes. This plan was curtailed, however, as Orton seriously injured himself slapping the mat (dislocated shoulder was what we thought at the time), meaning he and Edge had to improvise a piss-poor double-count out finish that left EVERYONE watching with a bad taste in their mouth. It’s a shame, but just one of those unforeseeable occurrences that happen every now and again.

What was foreseeable, though, was that the booking of the World Heavyweight Championship match would suck the big one, so you wonder why WWE decided to go ahead and have a five-minute main-event that ends with a lame-duck DQ, making the champion look like a complete and utter chump. That it did nothing at all for Big Show either leaves this match as a waste of everyone’s time, but just so you know how bad it was, the following Divas match is an improvement rather than the usual trough between the two championship match peaks a PPV normally has.

Maryse is stunning and one of the few blonde-haired women who catches my eye. She’s also a decent wrestler, so, along with Eve’s improvement, this had potential. At least it couldn’t be any worse than the previous match. Running for the same length of time as Swagger/Show, the two ladies kept the fans attention better and had, in my opinion, a better match overall. Eve also hits a Flatliner/Novacaine/Mic Check that puts Mr. Anderson and a few others to shame.

Batista, in a backstage promo with Josh Mathews, shows us why his cocky heel character was such a breath of fresh air and why he is sorely missed on WWE television today (everything about it, from the spotlight, the metrosexual fashion, etc, was genius). He and Cena main-evented the previous PPV in a Last Man Standing Match that had a great finish, keeping both men uber-strong as the feud rumbled on. Batista also showed off a lovely version of the Rings of Saturn submission hold going into this show, meaning he had a weapon to match the STF and cause an opponent to say “I Quit.” The pre-match hype video (hey, I can’t go a review without mentioning the WWE production staff at least once) was brilliant and encapsulated the rivalry, and how “real-life” it is – both men did join WWE at around the same time, they both rose the ranks at the same pace and both won their first World Championships on the same night. It’s one of the most logical rivalries we’ve had in a long time.

Starting off, I’m a huge fan of main-event matches having the introductions done when both men are in the ring. It makes them stand out from the rest of the card AND adds an amazing level of big-fight atmosphere to the proceedings. What I’m also a huge fan of is the way this match actually gets under way; it’s a little touch of inspiration that made me smile.

With 20mins+ to work with, they start slow in front of an amazingly hot crowd (the duelling Cena chants are immense as always), but build up to a level of brutality rarely seen in PG-era WWE. Powerful shots, throws, strikes, holds, weapon shots and two guys who have surprisingly good chemistry together add up to a satisfying end to a disappointing PPV. The finishing sequence – the last five minutes – is brilliantly pieced together and grabs you in until the final bell rings. Batista ends his WWE career the right way, putting someone over huge on the way out. And what a finish it is; the visual alone is unbelievable in its devastation.

Three extras sound like great value, but only the Bret v Miz match is worth watching more than once… and even then, just because of the rose-tinted glasses I have for Bret Hart. I know he’s worthless in the ring now (a sad, sad thing to have to say about “The Hitman”), but to see him win a title one more time, with the best version of the Sharpshooter ever utilised, brought a grin to my mug. Before the match, Miz cements his status as the best promo of 2010 with his monologue from the backstage area to the ring. He delivers it word-perfect and elevates himself in the eyes of every single person watching.

The footage of Punk and friends backstage is interesting because, even though we’ve seen him bald now, in the weeks following the PPV, he was wearing a mask to hide his shame. The “security cam” footage shows the S.E.S. leader sans mask and in all his bald glory on the night in question. It’s a nice little piece of footage that should have been used on TV when Punk was rocking the mask rather than be stuffed as a throwaway extra on a DVD.

Striker and King must’ve had a ticking off, because there was none of the back-biting that blighted their time on commentary from Extreme Rules the previous month. That being said, the show itself is blighted by poor booking in the World Heavyweight Championship Match and bad luck with injuries in three others.

Punk/Mysterio, Harts/Miz-icho and Cena/Batista are all worth another look though, with the IC opener also being entertaining enough for the time allotted. Not having a defined gimmick like the other WWE events, Over the Limit, did seem to suffer from a lack of identity in comparison and perhaps that, along with the various mishaps, is why it fell flat as a show overall.

The extras are decent enough, especially for a B-level release, so they go a little in making up for the otherwise average-at-best PPV itself.