When this DVD collection was announced, it immediately jumped to the top of my wish-list due to the era it would cover and the wrestlers it would focus on. So, when I received the set in the post, I couldn’t wait to insert it into my DVD player, press play and sit back to enjoy the era of wrestling that, in my lifetime of watching this great sport, was as good as wrestling could get. 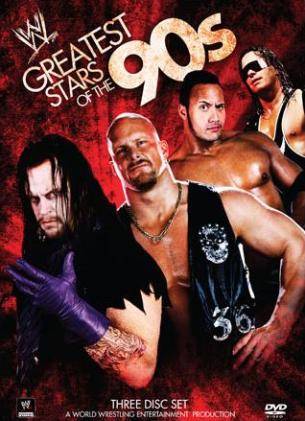 Of course, with nostalgia comes rose-tinted eye-wear; not all of the 1990s was The Attitude Era/Monday Night Wars, but thankfully, those compiling this collection managed to find some great moments from the early “WWF New Generation” years and also plucked out a rarely seen match between Hulk Hogan and Ric Flair in WWE.

Tazz is your host (ironically released after he left the company) and he provides the links between the segments that discuss fifteen of the “top superstars” of the 90s. Before we get into the first wrestler being profiled, Tazz mentions that guys from WWE, WCW and ECW would be featured as we go along, but, as you will see, even though he was correct in his claim, it’s not quite what you would expect.

Opening with Shawn Michaels and closing with Steve Austin, we run through various talents like Hulk Hogan, Ric Flair, Bret and Owen Hart, Lex Luger, Sting, Yokozuna, Mick Foley, The Rock, Triple H, Scott Hall,  Kevin Nash and Undertaker. The first disc also takes a brief look at the women of the 90s, as well as the really, really poor gimmicks of the decade (Bastion Booger, The Goon, Shockmaster, The Yeti, etc).

The extras on the first disc are all vignettes from the various stars (the Razor Ramon and nWo one stand out), while the entirety of discs two and three are all bonus matches, most of which have never been released on WWE DVD before. The WWE do get things wrong on occasion, but, in this area, they really have excelled with recent releases when it comes to avoiding repeat matches on subsequent releases.

The stand-out contests include a match between Ric Flair and Hulk Hogan that is largely forgotten, which is a strange occurrence considering the way Flair debuted in WWE (with the WCW belt, only for it to become, quite obviously, a WWE Tag Team Title belt when WCW got their strap back – seriously, watch the footage and you can clearly see it’s a tag title) and challenged Hulk from the off. The bout is decent, but for nostalgia and history, it’s a one-in-a-million. Other bouts to look out for are Bret v Shawn from 1992, Sting v Vader, Mankind v HHH in a cage, Owen v Bret from WrestleMania, Owen v HBK from IYH, Bret v Sting, Austin v Undertaker and Triple H v The Rock in a Strap Match.

Let’s get one thing perfectly clear, this DVD is a major disappointment. Only the bonus matches save it from being almost an abomination. Tazz opens the show claiming that stars from WCW, ECW and WWE will be featured. Of course, with this being a WWE release, the content would weight heavily in their favour – only an ignoramus would expect anything  else, but the fact that the only ECW name to appear on the list is Paul Heyman is a joke.

Tazz, the guy presenting it, was a huge star in the 90s, as was Raven and guys like Shane Douglas and Rob Van Dam, but not one of them gets even a passing mention. Lex Luger, Lex f’n Luger gets in, yet Goldberg, Vader, The New Age Outlaws, Terry Funk (OK, he could go in a 70s or 80s collection, so we’ll let him slide), Rick Rude, The Giant/Big Show, The Ultimate Warrior, Sid and Kane all missed out?

I can understand having to leave some people out, so the majority of those mentioned above not being included is understandable, but Goldberg, THE star of WCW in the last few years of the decade (around the same time Steve Austin became a megastar) should have been one of the first names on the list. Vader, too, was an awesome force in the early-to-mid 90s, so for him to be overlooked is a disgrace. As for Rob Van Dam, how he can be left out of a collection of the biggest stars of the 90s is a mystery only a few could answer.

Another failing is that each wrestler being profiled only gets around fifteen minutes each, so there is no real look at their career or much in the way of depth from the various talking heads. That’s not to say the talking heads are bad, for the most part, they’re actually pretty good and candid (Triple H mentioning that WWE messed up Hogan/Flair and missed a great chance to do something special is a particular highlight), but there isn’t the time to really devote to each individual, so once you’re just getting into it, we move on to something else.

The matches, however, are why this set should be purchased. Each one is never less than good, with a nice mixture of pay-per-view and TV bouts. Again, this is biased towards WWE bouts, but the WCW matches that are in there are pretty good. My one gripe is that, like with the profiles, there is nothing from ECW in the collection of matches, which, to be frank, sucks.

Sting v Bret is really good (and worth watching to see Sting in RED FACE PAINT AND A FULL GOATEE BEARD), while the Owen/Bret, Bret/HBK and HBK/Owen matches are fantastic bouts from a great little period in WWE before the Attitude Era kicked in. Shawn v Vader is easily up there with Vader’s best work, while the cage and strap matches are stunning pieces of work in their own right.

Hogan v Luger from Nitro is the pinnacle of Lex’s career, Bret v Diesel is so much better than it had any right to be and the “All Title on the Line” match from In Your House 3, HBK/Diesel v Camp Cornette is a great match that most will have forgotten.

The big question is whether this collection is worth the money. In all honesty, I would have to say no. If it comes down in price or you can get a deal on it, then, for the matches alone, I would say that you should get it, but at full price, this just falls short due to the format of the documentary portion.

Points: 6/10 (mostly because of the matches)