The Rise and Fall of ECW Book Review

OK peeps, first things first – I’m a huge ECW fan. Actually, I’m just big boned, but that’s not important right now. Remember, that as a self confessed ECW fan, this book could well turn out to be the equivalent of my Bible, although I don’t think Dan Brown will be reading between the lines and writing a movie starring Tom Hanks out of it. 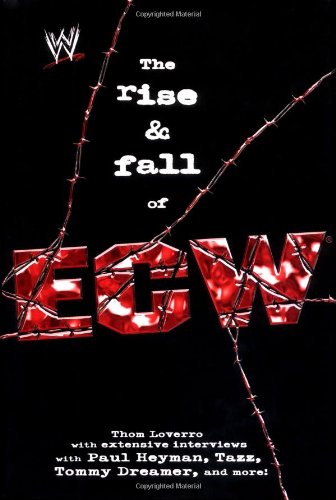 No, what we actually have here is a pretty thorough (but with a few minor niggles; more of those later) document of the tumultuous and way too short lifespan of the phenomenon that was Extreme Championship Wrestling, and it’s mentor, Paul Heyman.

When I say thorough, I mean thorough. Chapter one begins with a brief history of Pro Wrestling, going back to the days of Gotch and Hackenschmidt, before moving on (through the formation of the WWF) to how Paul Heyman entered the business. From there, the book moves on, and we examine how the ‘Psycho Yuppie’ from WCW known as Paul E. Dangerously ended up as the ‘mad scientist’ in charge of a small Philadelphia independent promotion; all part of common ECW folklore, but again, well researched and told in an engaging manner.

Thom Loverro, the book’s author, is a well-established writer, both of sports books and as a columnist in the Washington Times; his eye for the flow of the story is present throughout and makes this a smooth read.

“That is how to describe ECW in one word – fun.”
— Chris Jericho

For all that Tazz, Tommy Dreamer, Mick Foley, Paul Heyman and Joey Styles (even Hat Guy, Hawaiian Shirt Guy and Faith No More Guy from the fans at one point) are a constant in the narrative; conspicuous by their absence are the likes of Shane Douglas, Terry Funk, Raven and New Jack – all key members of the ECW story, but obviously, not on speaking terms with the WWE machine.

Strangely, D-Von Dudley is present; Bubba and Spike only have passing comments, maybe a paragraph or two between them. Even Eric Bischoff and Mike Awesome have their say in print, something I thought was pretty cool, even if it was only lifted straight from the DVD commentary, or so it seems.

Even though there are these guys missing, it’s never a huge problem, as there’s always someone to fill in the blanks, so to speak… it would just have been nice to read the full story from those involved. What is said, however, is very near the knuckle and in some cases brutally honest and not all of it complimentary to Paul Heyman, as you’d expect in a WWE produced book like this.

The book is very well paced, up until about 40 or 50 pages from the end, when it seems to lose track of the timeline of certain events. When the book is discussing what happened to ECW after the first PPV, about the time Tazz had agreed to jump to the Vince’s payroll, the flow seems to skip backwards and forwards. It could make things a little confusing if you’re not keyed up on how things went down, but it’s nothing major enough to ruin what the book is trying to do.

Perhaps a little more time could have been spent focussing on how ECW came to crumble so spectacularly, after all the book is entitled “The Rise & Fall” of ECW; bar a small section near the end, the actual downfall of ECW and the money situation is hardly mentioned. Also, one small problem is that the book describes Mike Bucci (better know as Nova / Simon Dean) as Mike Nova every time he’s mentioned, bar a couple of times when they get it right. Nothing major, but hey, it annoyed me!

“We were the little engine that could, and we did.”
— Tazz

If you’re a newcomer to the wrestling world, and keep on hearing about the legacy of ECW, then this book will fill in the gaps – on the same scale, if you remember all of this, then this book brings a smile to your face, and even fills in some inside info you may not have known; some of the stories are downright hilarious, one exchange between Paul Heyman and his ring announcer just before Barely Legal went live on PPV is absolutely hilarious, so I won’t spoilt it here!

To sum up – if you loved ECW, you don’t need me to tell you to go out and get this book. If you didn’t – go get this book and find out why so many of us did love the little promotion that took on the big boys from a bingo hall in Philadelphia – and nearly won.