Ric Flair: To Be the Man Book Review

Anyone who has followed the careers of Ric Flair or Mick Foley will know that these two aren’t the best of friends. In between their personal spats, they took the time to make derogatory remarks to each other in their books. Everyone knows that Mick Foley has not one but two New York Times bestsellers under his belt, and actually wrote the books himself. You’d think that with a life as interesting as Flair’s, you’d get something even more special. As it is, either Flair is a really poor writer, or his book was ghostwritten, and boy can you ever tell the difference. 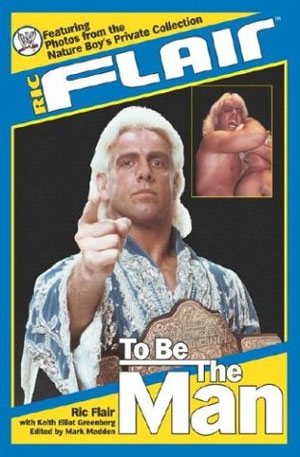 That’s not to say that the book is bad. Far from it. Once you get into it, it’s a fascinating read that takes a look at a man pouring his heart out after all these years, realising the mistakes he made and the things he wished he had done, whilst also knowing his strengths and limitations. Some of the stories are quite funny, and others are of great historical worth. He discusses his family, his “stylin’ and profilin’ lifestyle”, his friends in the business, and even his enemies. I’d heard prior to reading this that he was quite harsh on Dusty Rhodes in the book, but I didn’t find that to be honest. I thought that he was quite flattering. Unfortunately, Bret Hart didn’t get the same treatment, amongst others. Ric gives his honest opinion in the book, and that’s one thing you can’t really fault him for in that respect, it makes for a good read.

However, and maybe it’s because I’ve just come off reading two Foley books, I never really felt a bond between author and reader. It often seems like the writer is simply breezing through a timeline with no real substance, unlike Foley who cracked jokes and crossed from one chapter into the next with ease. I’m not a fan of ghostwriters and I don’t feel that this book did Flair any real justice. We’ll never know if he’s actually anything special as a writer, but for me personally, I wish he’d have at least tried, because whilst Flair may be a better wrestler than Foley, I cannot say the same about his book.

Still, try not to let it detract from the enjoyment of the book. There’s still a lot to take away from the book, even if it’s just the funny antidotes of being with Roddy Piper or the Plane Crash story. Another plus, which is something I’ve not seen in any other book, is that several different characters actually add their own brief little stories to accompany whatever Ric is talking about at the time. If he’s talking about Puerto Rico, there’ll be a small commentary by Hugo Savinovich, the Spanish announcer for the WWE. There are also extracts from Harley Race, Charles Robinson, Sgt. Slaughter and others, and they add just a little something extra to the book that would otherwise make it a standard everyday wrestling autobiography.

Overall, it’s a decent book. There’s certainly a lot to take from the book, and you can only respect Flair for looking back on his life with honesty and regrets as well as with pride (as he should). If you’re expecting a book that will educate you on the wrestling scene, past and present, this’ll be right up your street. If you’re expecting a book to hold dearly in the way of a Foley-written book, don’t bother.