By Adam Sibley
Video Game Reviews
This page contains affiliate links. At no additional cost to you, we may earn a commission if you click through and make a purchase. Learn more

This week I got the excuse to do a bit of family bonding as I took a crate of beer and my copy of Wrestlemania 21 over to my brother’s apartment to see who the true king of wrestling computer games really was. With my speciality being the Smackdown series of PS2 I was looking forward to testing my abilities on the X-Box and seeing what this game had to offer. 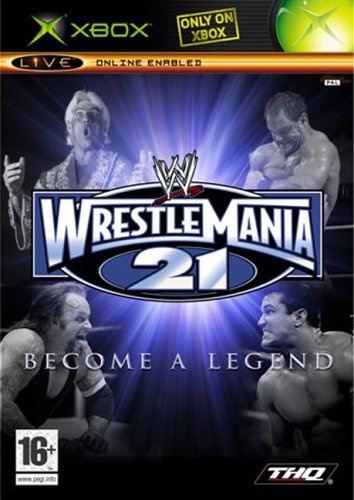 This latest release is part of the new WWE games strategy by THQ which has seen the release of “Day of Reckoning” on the Gamecube, the move of the “Road to Wrestlemania” series from Gameboy Advance to X-Box in place of the “Raw” series of games and the release of Survivor Series on Gameboy Advance. Are you still with me? I hope so as I am 99% sure that is the state we currently find ourselves in if you are one of those people that haven’t brought a wrestling game for a while you are now up to date.

Now that is over less of the history night and more of our lads’ night in or should I say Wrestlemania 21 review. My brother and I weren’t big fans of the Raw games for X-Box so we were looking forward to see how the new game for this platform would fare. When we heard the Wrestlemania series was coming to X-Box we were a little sceptical because you associate Gameboy Advance games with quick to play arcade style games so all that was left to do was fire it up and see what it had to offer.

When my brother and I fight it out we always have to create our own hilarious fighters to go up against each other, each being more ridiculous than the next. So we were delighted to see a really good level of character customization opportunities being able to change anything even down to the pyros. One thing we would like to see on wrestling game releases is the opportunity to choose a generic video to be playing on the titantron and more generic entrance music so when you create a character you don’t have to come out to the video for Trish Stratus no matter how entertaining it is to watch.

The pro reversal system built in to the game play was a welcome bonus. We all remember the days of Raw on the Playstation 1 when reversing a move used to be neigh on impossible well that is not the case with this release as it is the best game for being able to reverse me or my brother have played. This helps make matches go for longer which makes you less stressed as gone are the days when you have had 20 moves in a row done to you and no matter how hard you tried you couldn’t get a reversal. This new system which has an inbuilt reversal for every move makes the matches play more like the matches you watch on TV and gives people having their first go on the game a fighting chance.

One piece of advice my brother and I have for anyone playing in two player mode is if you want a fair fight don’t pick up the ladder in weapons matches as that thing seems to be indestructible and does a lot of damage. If you are playing against the computer or don’t like you opponent just remember to be the first one to get to the ladder as you will be able to floor even the biggest of opponents.

When we had done everything we possibly could to each other we decided to have a look at the career mode and discovered some good as well as bad points. The good point being the new superstar voice over and commentary. We first started with text on the screen back in the day then later on they started offering us some audio but this seemed to have a little delay from what you were seeing on screen as well as sounding a little quiet. Gone are these days though as the voices now seem real and are synced to the action a lot better. The bad point of the career mode is there is very little latitude and a lot of your path already seems to be set out for you but I suppose it isn’t called “Wrestlemania 21” for nothing.

Again on this game there are a lot of cool things to unlock like your favourite all time wrestling greats which fits in well with the tag line for the game which is “become a legend.”

We didn’t have the capability to take the game onto X-Box live but it looks like that is where the game comes to life. This enables you to become a legend online as well as competing in four player head to head contests. So if you are up for getting your manhood challenged by children from across the globe who are freakishly good at the game feel free to step up to the plate. Playing games online can really prolong the life of a game as by playing it in an online environment there is always someone new to beat or a new challenge to take up.

This is not the greatest wrestling game my brother and I have ever duelled over but it is definitely a step in the right direction for the X-Box platform. We think storyline and graphics are the two areas that need work but for the first in hopefully what turns out to be a new series for the X-Box it was really enjoyable. We were just gutted we couldn’t take it on X-Box Live as we think that is where the game will really come to life.