Its review time once again here at Wrestling101, and this weeks serving is WWE No Way Out 2005, kindly sponsored by those nice ladies and gents down at Silvervision. Now, back in February, I never got the chance to see No Way Out, but I had read many reviews on the event, both good and bad, so its finally time for me to make my own mind up, find out what my verdict is. 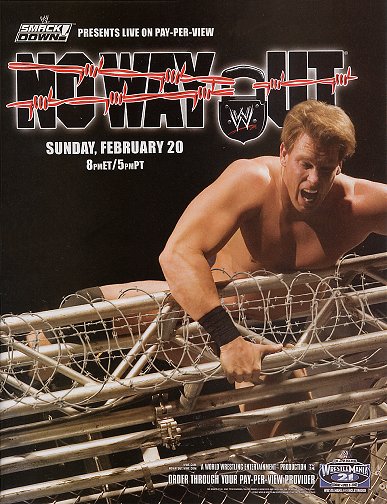 No Way Out is generally quite a strong PPV, due to the fact that it is the Pre-Wrestlemania PPV, a night where storylines are ended and in some cases started in anticipation for the final countdown on the road to Wrestlemania. This years No Way Out offered a conclusion to the Smackdown tournament to determine a number one contender for the WWE Championship as Kurt Angle faced John Cena to see who would go to Wrestlemania to face the Champion. And talking about the WWE Championship that was on the line as JBL defended the belt against the Big Show in a Barbed Wire Steel Cage match.

Ok, down to business, the PPV opened with Rey Mysterio & Eddie Guerrero taking on Doug and Danny Basham for the tag belts. Everyone knows how good Rey & Eddie are, and how much Smackdown benefits from their presence, if you go back to late 2002, it was Rey & Eddie amongst a few others who were really the only reason people watched Smackdown. Now, a few years later and its still the case, but this time Eddie and Rey were not fighting each other, they were a team, and a good team to boot. The match was fast paced and really told a good story, Eddie and Rey tagged together as if they had been tag team partners all their lives. As for Doug and Danny Basham, am I the only person who likes them? For me they are a “proper” tag team, and remind me very much of the good old days of tag team wrestling, anyway they were on top form and worked really well. Both teams complimented each other very well, and I really enjoyed this match, it was a great way to open the PPV, and left me in hope that the PPV might not be so bad after all, but them again I am an optimist.

Next match up is Booker T vs. HEIDENREICH! , HEIDENREICH!. This match was built up on a very flimsy excuse for a storyline, and in truth was just a filler match to put HEIDENREICH! over with the fans. The match was pretty bad to say the least and I didn’t really enjoy it for a number of reasons, firstly it meant nothing, secondly, the actual wrestling was sloppy and seemed disjoined, and thirdly it achieved nothing because it had a rubbish ending. Surely, the WWE creative “brains” could have came up with something better than this for Booker T.

The Six Man match for the Cruiserweight title is next, with Champion Funaki defending the belt against Chavo, Shannon Moore, Paul London, Spike Dudley and Akio, who are all great Cruiserweight talents. The match started well with solid paced Cruiserweight action, with all 6 men proving their worth. However, after a while, things started to feel rushed and within a few minuets, we were left with the last two participants fighting each other, and then the match coming to an end. Although the match was good, it was far too rushed and didn’t do any justice to the stars that performed in the ring, which is a huge shame really, because as we all known, if the superstars have the time, they can really showcase their ability.

The next match is a strange one, Luther Reigns vs. The Undertaker, again based on a very weak storyline, but I suppose you can forgive the WWE creative department for that because they wouldn’t want to start a huge angle so close to Wrestlemania. Now the match was slow paced, which is what you would expect from two guys like Taker and Reigns. It was pretty much a one sided affair with Undertaker getting most of the offence, although Reigns did have his moments. Overall, the match was ok, but it lacked an importance and felt meaningless, it really wasn’t PPV quality and probably could have been better.

John Cena takes on Kurt Angle now, and this match does have a meaning, so that’s good, and this match has been built up quite well so that’s even better, fingers crossed we might just have a good match on our hands. Basic storyline was that this was the final of a tournament to find out who would challenge the WWE Champion at Wrestlemania, Angle? or John Cena?. Getting down to the match it was good, and there was a good feeling towards the match. I thought Angle performed well as usual, not his best performance by any stretch of the imagination, but he didn’t need to go out and have a first class match, it was Cena’s night. Cena went out and put in one of his better performances since debuting in the WWE, he showed that he can take part in good matches, but he also showed that the fans actually care about him and that he has a following like many main event stars in the WWE. Overall, this match was good; it did a great job it putting John Cena over as a main event star.

Last but by no means, least we have our main event, a Barbed Wire Steel Cage match featuring WWE Champion John Bradshaw Layfield taking on the Big Show. Now, a normal match between the two may not excite wrestling fans, not exactly a technical masterpiece, however add a Barbed Wire Steel Cage and things become more interesting, surely? Well it did to a point, but let’s face it, nobody honestly thought this steel cage match would be anything more than a brawl did they? The match was slow paced, with very few actual wrestling moves involved. However both Big Show and JBL performed quite well, and I did enjoy the match, as I said it wasn’t great, but it was quite entertaining. The match did end with a little stunt courtesy of the WWE stunt crew, which was nice. Another interesting element to the match was Batista‘s involvement, which gave the match an extra factor of “Will he or won’t he be a factor” which made for good TV. As I said, overall the match was entertaining, and it did its job.

Some say it’s the worst WWE PPV ever, some says it’s a good PPV, I say it’s an average PPV that advanced a few storylines and characters, but it was generally quite weak. Considering it was the Pre Wrestlemania PPV, I would have liked something better, something for me to say “well I have bought this PPV and it was good, I am definitely going to buy Wrestlemania” and whilst it did that to a certain degree, I don’t think every fan would have thought that way. The best match of the night was either Cena vs. Angle or the opening tag team match, both of which were solid. The rest of the card was average at best, barring the main event that was a little better because of the cage, other than that everything else felt like it should have been on Smackdown rather than a PPV.

The show was also littered with awful and pointless Smackdown Diva segments which I just couldn’t bare, so I hit the trusted “Skip” button, I would advise you o do the same.

Not a great set of extras, but better than nothing!