By Matt Singh
Wrestling Book Reviews
This page contains affiliate links. At no additional cost to you, we may earn a commission if you click through and make a purchase. Learn more

Even before the current spate of pro wrestling industry workers’ deaths, the business had a long and storied history of wrestlers and personalities dying young, from various different causes from alcohol abuse to steroid and pain pill abuse.

Tributes: Remembering Some of the World’s Greatest Wrestlers 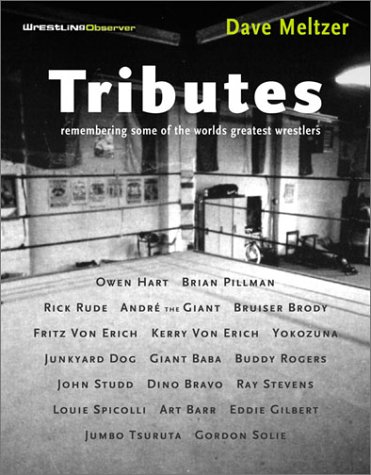 This book is a dedication to those who have, through weakness’ of their own as well as not, to pay testament to those fallen heroes who lives on screen are very different to that which they live off screen.

Obviously, any attempt at this can be described as cheap and an effort to cash in on a deceased person’s name but the author of Tributes, Dave Meltzer, shows a willingness to expose what really led to their downfall and a further willingness to comment and explore the use of narcotics and steroids that are all to prevalent in the business. By doing this, Meltzer gives his writings immeasurable credibility. Meltzer is pro wrestling’s top journalist, and has been producing the Wrestling Observer Newsletter (WON) for 22 years. The obituaries contained in this book were first printed in said newsletter. And that’s what this book is, a lot of obituaries dedicated to famous and infamous names from the pro wrestling world.

Another risk with producing a book like Tributes is that the writer runs the risk of turning the pages into page after page of misery that dampens the soul of a loyal pro wrestling fan. This issue is addressed in the foreword, by Live Audio Wrestling host Jeff Marek however.

Meltzer side-steps that pitfall by being informative in every sense of the word; for instance, did you know that the name Andre the Giant came from his sting in Montreal, where booker Jean Ferre gave him the name, or that Rick Rude used to be a bouncer at the toughest club in Minnesota with high school friends Michael Hegstrand (LOD Hawk) and Barry Darsow (Demolition Smash/Repo Man)?

Tributes has a good mix of people featured, from well known names that casual fans will know such as Owen Hart, Andre the Giant and Yokozuna, to names that only hardcore loyal fans will know like Jumbo Tsuruta, Shohei Baba and Ray Stevens. The authors insight and knowledge of the subjects covered really shines through, with Meltzer’s writing being a blend of story, fact-based and funny and sad anecdotes. Meltzer doesn’t pull any punches, and doesn’t opt the sappy ‘they died so I must gush my love for them’ phoney path of obituary, but instead he shoots from the hip; whether it be the story about Art Barr’s alleged rape of a woman, to Brian Pillman’s frequent near-psychotic episodes towards the end of his life, to Junkyard Dog’s steroid and cocaine abuse to Fritz Von Erich’s ‘farther living through his sons eyes’ pressure which caused the downfall of all but one of his sons. Not matter which obituary you read, from Ray Steven’s to Brusier Brody, they’re all interesting to read and will no doubt contain content that the reader didn’t know before they picked the book up.

Unlike the WON which known and famed for it’s text-only format, Tributes contains glossy and high-quality pictures of each felled man featured. For the hardcore fan, the highlight of Tributes will no doubt be the stories about the man away from the ring, whereas for the casual fan it’ll certainly be the tales about the locker room incidents such as Kerry Von Erich (Texas Tornado) never taking his boots in the locker room after a 1991 motorcycle accident cost him his right foot, which resulted in virtually none of his co-workers and peers knowing he in fact didn’t have a right foot.

The most overall interesting obituaries are the Brusier Brody, Shohei Baba, Jumbo Tsuruta and Fritz Von Erich ones. The story of Brody is one of a noble man, not willing to sell his sole by signing a deal with a national powerhouse such as WWE, or Jim Crockett Promotions, and a story of a real savage between the ropes who attacked and scared audiences while engaging in bloody and legend brawls. However, with the author knowing Brody personally, the real story of Brody, real name Frank Goodish, emerges, and is one of a loving father and husband who always did everything with his family in mind and helped carve a new role for less kayfabe-pushing pro wrestling personalities, such as Meltzer.

Shohei Baba’s obituary is similar to Brody’s, in that Baba was a man of his word, a rare thing considering he was a promoter for a large part of his industry tenure. It also tells of how much of a shrewd businessman Baba was, becoming a multimillionaire years before Vince McMahon, stock market playing and real estate in his native Japan and Hawaii.

Baba’s close friend and co-worker Jumbo Tsuruta is also a national hero in his native land, and was the first ever foreign wrestler to hold the coveted American Wrestling Association (AWA) World title. Tsuruta, Meltzer explains, was also “the first Japanese wrestler to be a world class worker at a mixture of Japanese and American styles”, as well being under heavy and serious consideration for a run with the most prestigious wrestling title at the time, the National Wrestling Alliance (NWA) title.

Fritz Von Erich’s life story is certainly one of a movie script, from being a hated German heel in his native Texas, to a feared madman who used his dreaded ‘Iron Claw’ finisher on Japanese wrestlers when touring Japan as a hugely over heel, to being a promoter and owner for his World Class Championship Wrestling (WCCW) promotion and super-over babyface Texas hero. On Von Erich, real name Jack Adkisson, Meltzer candidly writes about how Von Erich placed an over-bearing and impossible to live up to tag on all of his sons, which was one of a clean-cut, All-American clean-living family of sports stars that always won against the odds. That, however, was far from the truth, and was anything but, as all of his industry-working sons where heavily into steroids and up and downers, and when things started to go wrong for one of Fritz’s sons, things went wrong in the worst case possible. The Von Erich dynasty quickly crumbled soon thereafter, and in the most notable case with Kerry Von Erich, AKA Texas Tornado.

All but one of the obituaries contained in Tributes are of actual wrestlers, with the exception being perhaps the greatest announcer the business has ever seen, Gordon Solie. An interesting story Meltzer tells is of Solie at the 1995 World Championship Wrestling (WCW) Hall of Fame induction, and Solie’s unwillingness and un-easiness to announce Angelo Poffo and John Studd into the Hall of Fame. The reasons being, Poffo was a big draw in the Midwest two decades earlier, but was never a draw anywhere else, being inducted simply because his son Randy Savage worked for WCW at the time. Solie’s justified gripe with Studd was that his only big program as a main eventer occurred in WWE, and not anywhere else at any other time. By the time of said Hall of Fame induction and banquet, Solie disliked all the politics in WCW, and left soon after. To prove Solie’s ability at announcing, when Georgia Championship Wrestling (GCW) was being shown nationally on Turner Broadcasting System with Solie on play-by-play, the show pulled in 6.3 million viewers weekly. It would take 17 years for that number to be consistently bettered.

The only viable criticism that can be levelled at the book, is that it could’ve been longer. Written and published in 2001, the book obviously doesn’t contain the likes of Lou Thesz, Stu Hart, Dick Hutton or Wahoo McDaniel, and perhaps in a few years’ time, Meltzer could produce an all-new, updated version of Tributes containing such names as Curt Hennig, Michael Hegstrand and Elizabeth Hulette.