Last year, we kicked off a look back at the 90’s cult classic, Buffy the Vampire Slayer. The series, spearheaded by Joss Whedon, celebrates its 25th Anniversary this March. The movie on which the show is based (sort of; Whedon wrote the movie, hated the way it was made, and then created the show as a way to do the idea justice) came out a cool thirty years ago but I don’t plan on doing a big anniversary retrospective on it; the film has few redeeming qualities. In fact, other than a fantastic villain performance by Paul Reubens, it has no redeeming qualities, but man that Pee Wee was phenomenal.

Anyway, you can check out all our previous articles in the series, breaking down each season of Buffy (and Angel to boot), here: Buffy the Vampire Slayer.

What else is left to say about the series I love so much? All that’s left is to offer a completely biased, wholly unscientific, and absolutely indisputable ranking. So, without further ado here is part one of five in our list breaking down all 131 episodes. Technically there were 144 episodes produced but I’m combining a few two-parters because, though they aired on different weeks and sometimes had different writers/directors, they tell a single story spread across the two episodes. Things also get hairy when you get to the second half of season seven, where the stories get very serialized, but for the most part, even those episodes are still treated as single entries. 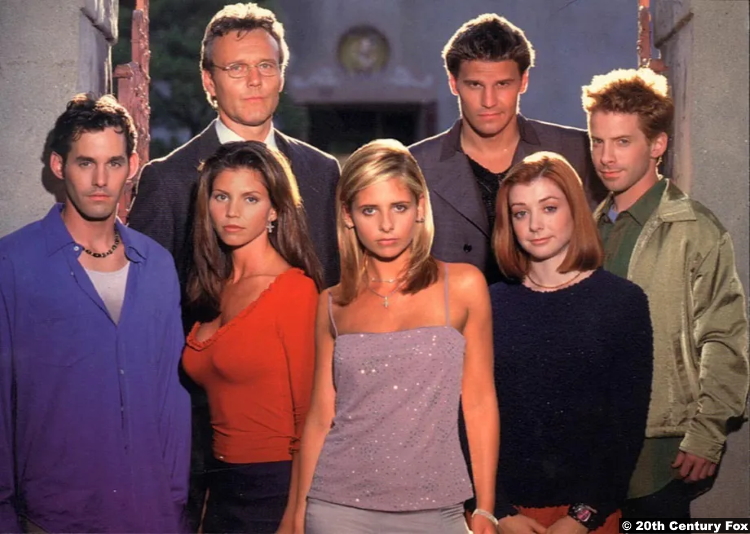 The list is divided into four categories (with a fifth article wholly devoted to the number one entry): At the bottom are the episodes “EIGHT AND BELOW.” Those are the ones—ranked an 8/10 or below—that, for one reason or another, had serious missteps, structural flaws, bad plots, or some other errors that couldn’t be overlooked no matter how charming the writing was. After that, there are the episodes that are “NOT BAD BUT NOT MUCH.” These episodes—ranked 8.5/10—all have plenty of redeeming qualities but they’re hamstrung by one or two big problems or even a ton of little problems that keep it from rising up the ranks. Next are the 9/10 episodes simply called “GEMS.” These are the brilliant ones, the side-splittingly hilarious ones, the fantastically written ones, the surprise-filled twisty ones. These are the ones I loved, but not as much as the last group in the ranking. At the top are “TENS.” These are the 10/10 ones, the best of the best, the little pocket masterpieces that made the show the cult hit it became, and which helped the show maintain its place in genre fandom twenty-five years later.

Disclaimer #1: I won’t be doing too much summarizing of the episodes here. Instead, I’ll mostly spend the few words I have devoted to each entry explaining its placement in the ranking. This listing is for the fans, not someone who hasn’t yet seen the show. What are you waiting for? Go watch the show!

Disclaimer #2: Making this list was, at times, a ton of fun and, at other times, agonizing. The best of the best were quickly identified, though coming up with a satisfactory ranking wasn’t easy. Likewise, the bottom of the barrel episodes were also easily spotted, but which goes at the bottom?

Actually, that was easy, too…

THE “EIGHT AND BELOW” EPISODES

The worst for multiple reasons. To start with, there is almost nothing to enjoy here. For another thing, the “magic is like drugs” parable is laid on so heavy-handedly, without nuance or subtext, it becomes secondhand embarrassing to watch. The scene where Willow drives “drunk” with Dawn in the passenger seat never sat right with me from a “true to character” standpoint. 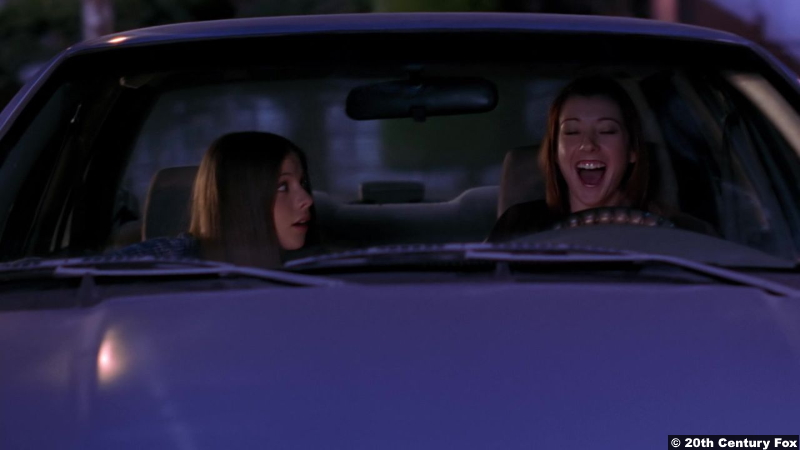 A public service episode with a moronic plot. Don’t get me wrong, there are plenty of episodes of Buffy and Angel that have silly plots, but the shows usually knew how to balance the silliness of it with a wink and a nod and some sharp writing to make you laugh with it and not at it. I didn’t even laugh at beer bad. As with Wrecked, I was more embarrassed to watch.

I almost combined this one with Wrecked, but I hated the latter one so much more and found this one less offensive enough to keep them split. For one, the hijinks of the trio is handled better than in other episodes. For another, the destructive relationship between Buffy and Spike is literalized in the most literal way possible. It’s an episode with very little meaningful plot but a lot of good character development for everyone but Willow. She has development, just not the good kind.

We did not know how the internet worked in 1995. The plot is simple: Willow falls in love with a “person” on the internet, but the person is actually a demon that was, long ago, sealed in a book via magic. I’m with you so far, Buffy… That book was then uploaded onto a computer. Okay… And that set the demon loose in the computer. Oh no… And then the demon started online chatting with Willow. Alright, Ima head out… What follows is a lot of cringe, though I’m sure it wasn’t so bad in 1995. I honestly can’t remember. I do remember cringing pretty hard last year when I rewatched it.

Students are being killed and reassembled as a Frankenstein’s Monster-like creature. That’s a pass. There’s some nice Angel/Buffy stuff here, and some lovely Giles/Ms. Calendar flirting. In fact, that’s a recurring theme to the first half of season 2: The plots are usually forgettable but the character stuff keeps things flowing nicely. The A-plot is enough of a bore to hold this one back, however. 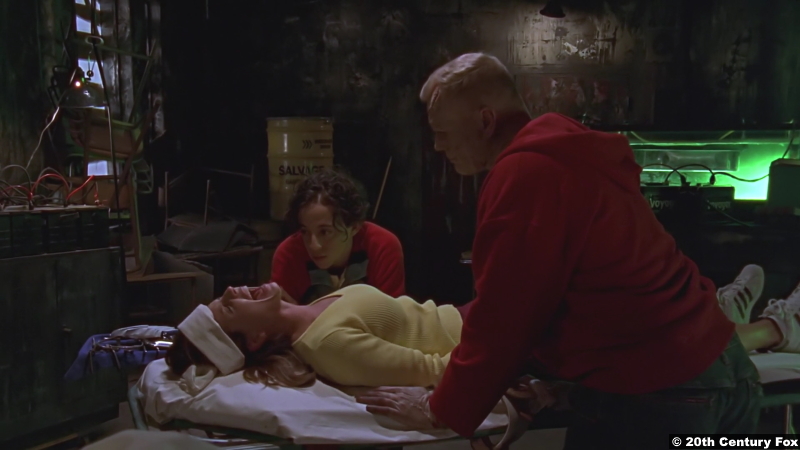 The problem with all the subpar season 1 episodes is the writers and actors hadn’t quite figured out the needed subtleties to make everything work. These were very plot-centered episodes early on and the plots were not great. The Pack is about school bullying, with Xander and some other high schoolers being possessed by the spirit of wolves or something. It’s just as on the nose as the next entry on the list, but not nearly as cheesy-fun.

When you pitch a show to network execs, you usually have to offer up a handful of episode ideas to show how you can explore the various themes you intend to build the series around. Buffy was pitched as “High School is Hell…literally.” The personal demons and challenges young people face in school are, in this show, made literal. So, it’s not enough for Xander to be preyed upon by a horny teacher, the teacher has to be a literal praying mantis monster determined to eat him. I wonder if my feelings would be better if the monster wasn’t a B-Movie rubber suit. I was never embarrassed, however; the cheesiness and cheapness of it were almost endearing.

This one is a lot higher on other lists I scanned over the past year. Personally, I thought it was just an okay episode. I can see the hints at the kind of show Buffy would be, one that was willing to blur genre lines. The gimmick of turning the Scoobies’ nightmares against them is a good idea, but it will be done much better in a later episode. This is just okay.

The worst episodes of season 2 feel like they belonged to season 1. My problem with this episode is two-fold. On the one hand, the plot is season 1 levels of dumb, coming after the show had already jumped to a new level of quality, proving it was better than the kind of on-the-nose storytelling seen previously. The other problem is that the episode aired right before the amazing two-part finale. It is sandwiched between two incredible stories (I Only Have Eyes For You, and Becoming 1-2) and sticks out like a sore thumb, ruining the flow that the show was on since Angel turned into Angelus. Rape jokes are also way too casually employed, but that’s the mid-90s for you.

Feels like an idea that was bandied about when the writers were trying to nail down the plot of Nightmares. As with the previous entry, its biggest sin is that it stops the momentum of the Angelus storyline for a one-off that’s not good enough to justify its placement in the season. It also suffers from a bad writing trope: Introducing backstory that is only relevant in this episode and never brought up again. Buffy had a cousin who died in a hospital and now Buffy hates hospitals. She will be in hospitals a lot in this show so it’s a good thing she completely conquers her fear here and now and never brings it up again. 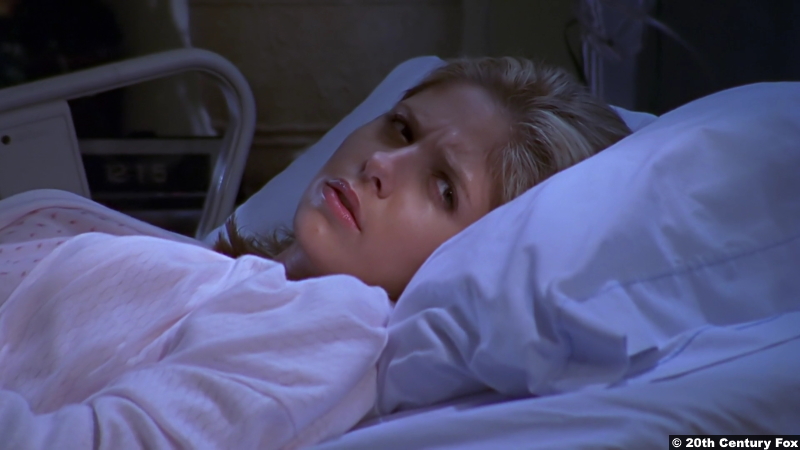