Tevita Fifita is a second-generation wrestler, his father Haku was a WWF World Tag Team Champion with Andre the Giant and WCW Hardcore Champion.

Fifita followed in his father’s footsteps wrestling for WWE between 2011-2014 where he was known as Camacho and teamed with Hunico.

The 31-year-old from Kissimmee, Florida recently signed with TNA and now goes by the name Micah. He joined The Rising alongside another two former WWE stars Drew Galloway and Eli Drake.

We caught up with Micah to talk about sharing a ring with The Undertaker, getting released from WWE, his aspirations in TNA and much more. 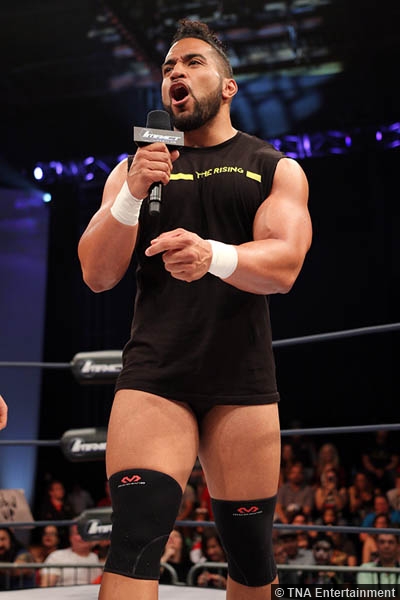 With your father being a professional wrestler (Haku), were you always going to follow in his footsteps?

Our father’s footsteps are his own. My goal as a kid growing up was to be a professional football player and a lawyer. Our parents shielded us from wrestling so that we may experience all that life has to offer. Not just wrestling all the time. 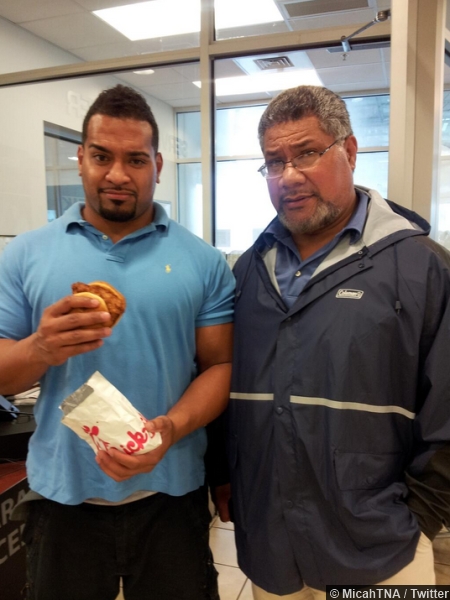 When you did watch wrestling, who were some of the wrestlers that you enjoyed watching?

During my early childhood, it was Hogan, Ricky Steamboat, Sting, The British Bulldogs and of course my dad then as time progressed I really started to enjoy watching Scott Hall, Shawn Michaels and Undertaker.

There was a time our parents kept us away from wrestling and then when our dad was working for WCW I enjoyed watching The NWO, Faces of Fear, Chris Benoit, Eddie Guerrero and Rey Mysterio. At the same time, WWE was beginning to build the likes of; The Rock, Stone Cold, Triple H and Kurt Angle during their attitude era.

What was it like when you signed with WWE and joined the FCW developmental territory with the likes of CJ Parker, Big E. Langston and Brad Maddox who were there at the time?

When I first joined WWE’s developmental program it was known as Florida Championship Wrestling (FCW). It was intimidating at first due to the amount of experience many of the talent had compared to my one year of training coming in. Luckily there were really great guys and girls there that I built a friendship with and that helped me get adjusted. For the first few months there it was a bit nerve-racking because I was unsure of myself but eventually I began to find my groove and walk with a swagger.

You mentioned three gentlemen that joined FCW after me, CJ Parker is an absolute joy to work with, he loves wrestling and he is passionate about it and it shows every time he’s involved with wrestling no matter if it’s in the ring or through discussions. Big E is awesome. He is the strongest man I’ve met, worked with and trained with. He gives 100% to a job he did not grow up in and wants to learn more all the time.

Brad Maddox, I did not hang out with outside of work, the previous two I have. Brad, however, during work was awesome on the mic and in the ring. He’s a talented and entertaining individual.

What was it like when you made your WWE television debut working with Hunico?

To be honest with you I can’t remember my television debut for WWE. Working with Hunico in the ring was a great time, I learned many different things about the Lucha style of wrestling from him and amateur wrestling. He is stronger than he looks.

You worked with a lot of the guys who have come through NXT, what was it like working with the likes of Seth Rollins, Bo Dallas, Tyson Kidd, Big E. and Adam Rose?

Every talent you mentioned in your question has “IT”. They love wrestling, they live it. A couple of the guys you mentioned I have great friendships with so I have been able to know the person, not just the talent and I know firsthand they are good guys.

You shared a moment in the ring with The Brothers of Destruction, Kane and The Undertaker, what was that moment like?

My entire time with WWE was a highlight. There are ups and downs with my time at WWE but I wouldn’t trade my time there for anything. There is more than just wrestling when you’re with WWE, there are the relationships, friendships, bonds that are created not just between talent but the entire staff from production to security to medical. There are the road trips, the tours, the flights, the different cities, states, countries…it’s one big highlight.

My dad would be able to talk to you more about Mr. McMahon as a boss, but from my time in WWE I know Triple H as my boss.

How would you describe Triple H as a boss and what do you think of his achievements with the WWE Performance Center and NXT?

Triple H is a great boss and a great man. He treated me fairly and always was up to listen when I needed a moment of his time.

What he set out to do with the WWE Performance Center he has accomplished and what is even better for those that pass through their doors is that Triple H still has many goals for the Performance Center and NXT so you can bet great things are still to come.

How were you informed of your release from WWE?

Mark Carrano of talent relations called me to inform me of my release in the middle of my haircut.

You’ve recently joined TNA and are a part of The Rising – how did that move come about?

I became part of TNA because a number of the TNA talent who I’ve worked with before put in a good word for me and then I did the rest to prove that I’m good enough to be part of the company.

Whilst working with WWE did you watch much of TNA and did other wrestlers in WWE watch TNA?

Yes, when I was working for WWE I watched TNA because I enjoy watching wrestling. I wanted to see what other wrestlers were doing to stand out and be different. I believe there are other WWE talent that watch TNA as well, I only know of one who I can confirm that did.

I know Drew and Eli from our employer before. They both are amazing talents and I’m grateful to be working alongside them as part of The Rising. As well as being great to work alongside in the ring, they are also two people you would want to go out to the bars with for a few drinks afterwards.

There a lot of guys in TNA that you haven’t worked with before, who are some of the wrestlers you’re looking forward to getting in the ring with?

TNA has a great roster! I’m really looking forward to working with everyone because all of them I can learn something from and maybe take and make it my own.

What has Dixie Carter been like as a boss?

Dixie Carter has welcomed me into TNA with open arms. She is a southern bell with true southern hospitality.

What the fans of wrestling can expect from Micah in 2015 is hard work with a smile!!! No more pretending I’m something I’m not. Just me pushing my limits and boundaries to become a top talent for TNA.