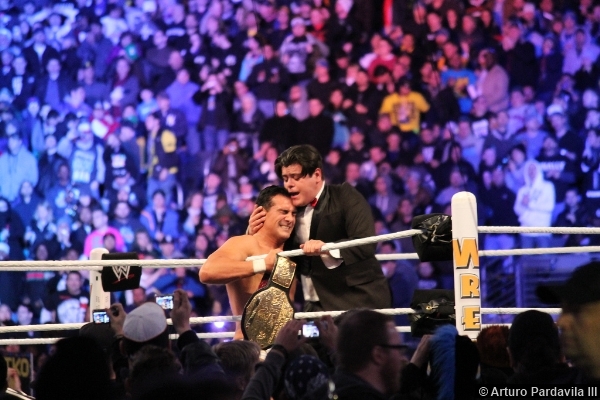 WWE.com made the announcement on Wednesday that WWE has come to terms on the release of Ricardo Rodriguez (Jesus Rodriguez). This brings an end to Rodriguez’s four-year tenure with the company as Ricardo Rodriguez made his WWE debut on the August 20, 2010 edition of SmackDown as the personal ring announcer for Alberto Del Rio. During his time with Del Rio, Ricardo would often find himself getting physically involved with Del Rio’s opponents and even dressed up as Del Rio’s on a couple of occasions, masquerading as the likes of Big Show and Sheamus.

In July 2013, Ricardo was suspended for 30 days for his first violation of the WWE Wellness Policy and, upon returning to WWE a month later, Ricardo inadvertently cost Del Rio a match and Del Rio turned on Rodriguez, assaulting his personal ring announcer and bringing an end to their three-year partnership. Ricardo would then side with Del Rio’s rival, Rob Van Dam, for a short time, but when RVD went on hiatus after Battleground 2013 in October, Rodriguez was dropped as RVD’s personal ring announcer. Ricardo then began pulling double duty for WWE, working under a mask as the jobber, El Locale, as well as joining the Spanish announce team, where he remained until his release.

What do you think of Ricardo Rodriguez’s release? Post your comments in the box below.