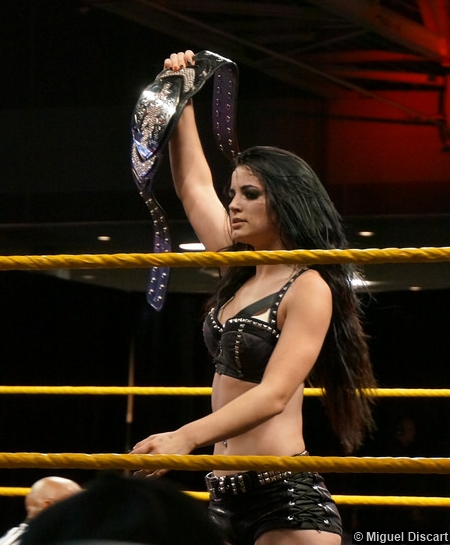 On Thursday’s episode of NXT on the WWE Network, NXT General Manager John “Bradshaw” Layfield confronted reigning Divas Champion and NXT Women’s Champion Paige to inform the Diva that, since she has risen to the top of the main Divas roster as the new Divas Champion, then he is stripping Paige of the NXT Women’s Title in order to give the up-and-coming NXT Divas a shot at the gold. JBL also announced that there will be a tournament to crown a new NXT Women’s Champion.

Paige became the first ever NXT Women’s Champion on July 24, 2013 by defeating Emma in the Finals of a tournament. Paige would hold the title for nearly a year before being stripped of it this past Thursday night. In her main roster debut on April 7, Paige defeated the longest reigning Divas Champion of all-time, AJ Lee, to win the Divas Title.

Who do you want to see win the NXT Women’s Title? Post your comments in the box below.