They have been a long time coming, but the results are in for the Wrestling 101 WWE Awards for 2013!

We had more particpation than ever this year with over 200 voters from 12 different countries. We’ve cracked the big two hunned! Big thank you to everyone who cast their ballot and continued to support Wrestling 101 in 2013.

With the UK making up 55% of the votes, and the US 34%, we will once again be taking a special look at how particular countries have voted. 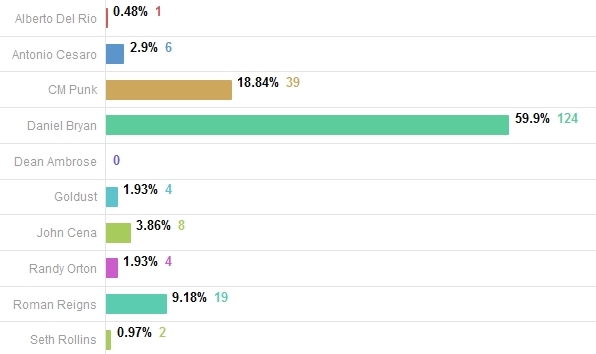 CM Punk defended his crown valiantly, but Daniel Bryan runs away with the big gong in no real surprise, being the standout in WWE for both performance in the ring and crowd support. Poor Ambrose gets no love. 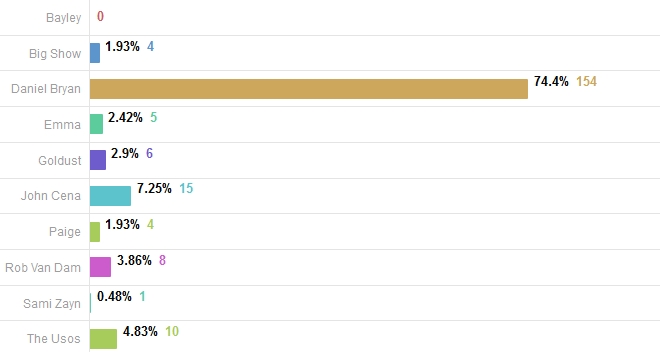 Bryan gallops home with almost 75%, being clearly the most beloved wrestler in the universe and having the best babyface comebacks in wrestling. If 2013 has taught us anything, it’s that people just love that little bearded so-and-so. 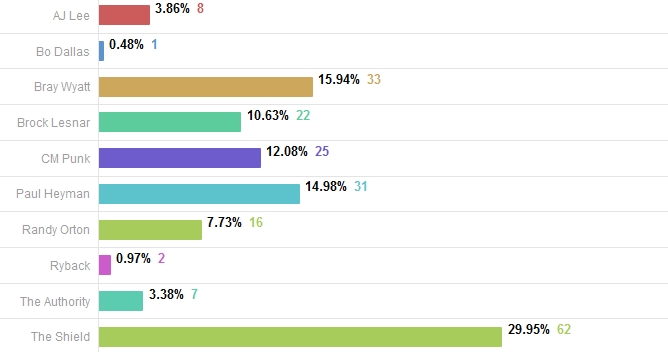 Good decision. The Shield were amazing in 2013 in and out of the ring and this is a just reward. Between them, Brock, Wyatt, Heyman and Punk, there were clearly a lot of strong heel performances this year.

Daniel Bryan vs The Authority 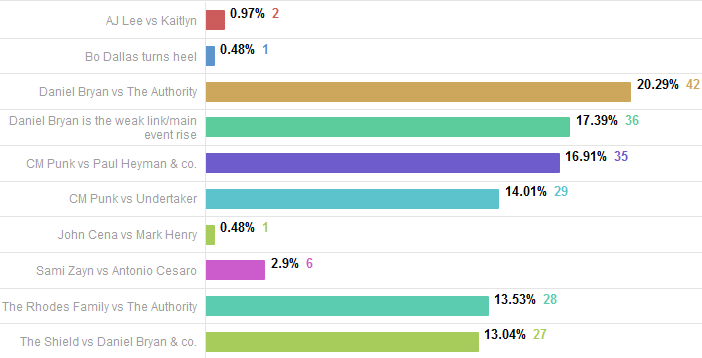 The stories this year were all about Bryan and Punk, who make up over 80% of the votes between them. Bryan’s thus far anticlimactic tussle with The Authority is the pick of the bunch.

CM Punk vs The Undertaker 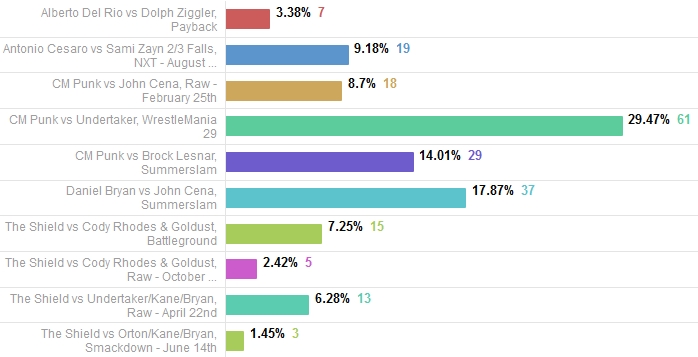 Historically, big Wrestlemania matches are hard to beat for MOTY, and there’s no change here as Punk/Taker wins ahead of two amazing Summerslam matches, one of which featured…

Here you can see the difference between UK and US voters, as the very hardcore post-Mania crowd was a big winner with the British folk, while a Rock sing-a-long scores big Stateside. And Daniel Bryan brings them all together, because… 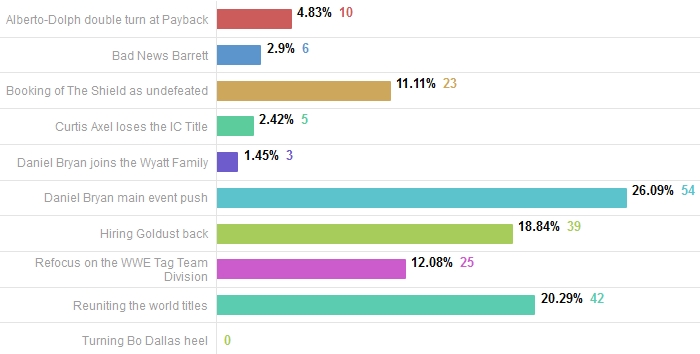 We want Bryan, and we want him now. We see how well the tag team scene improved in these results between Goldust, the booking of the Shield and the resurgence of the division. 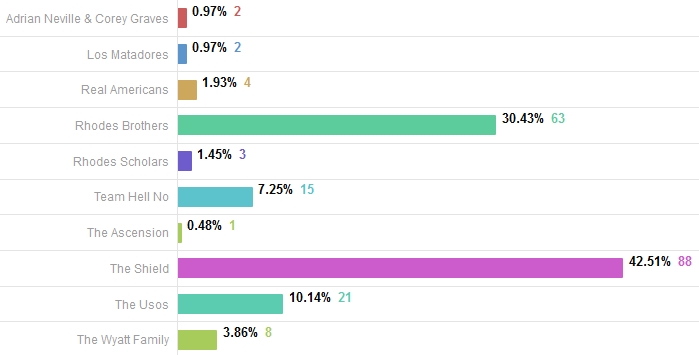 Speaking of which. This was a no-brainer after The Shield were one of the top acts in wrestling in 2013, but the Rhodes Brothers made them work for it. 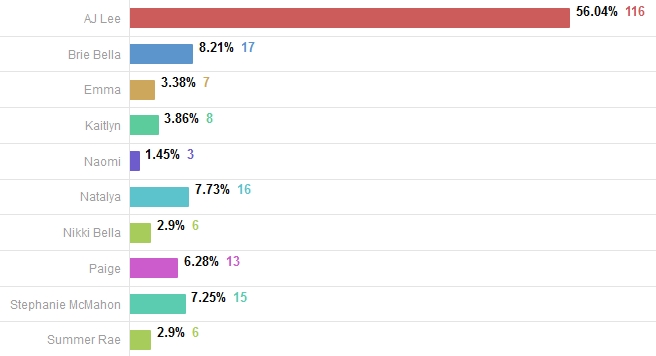 Without much competition and in the middle of a dominant Divas Title reign, AJ Lee comfortably retains her title as the best lady wrestler. Good to see you Brits sticking by Paige. I prefer Emma though. Just saying. 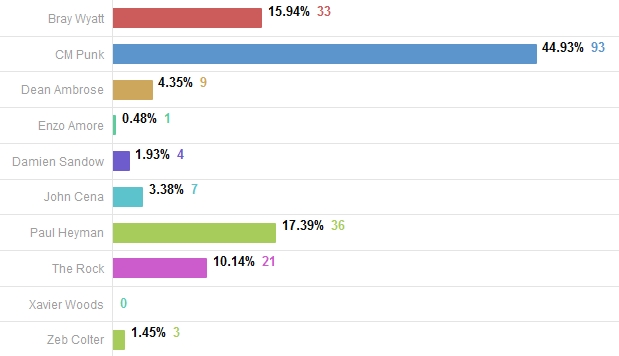 The CM Punk Memorial Trophy once again resides comfortably in the arms of the Second City Saint. With an expected total of zero promos for 2014, he remains a solid favourite to win again next year. 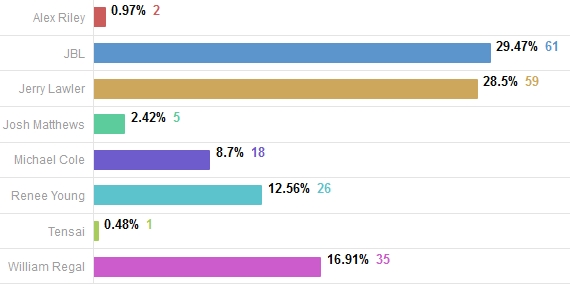 In the closest race thus far, JBL sneaks a victory from the ever-present Jerry Lawler. This is the first result that actually disappoints me, as I’ve sadly grown to quite hate JBL. Good to see Regal and Renee representin’ though. 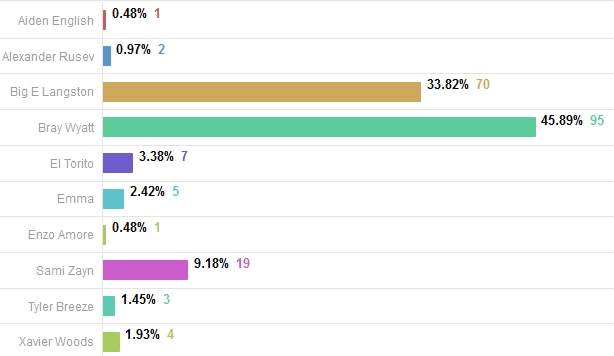 The Eater of Worlds is deemed WWE’s most exciting new prospect, with Big E Langston his only competition. Let’s just hope his career has a more upward trajectory than last year’s winner…Ryback. 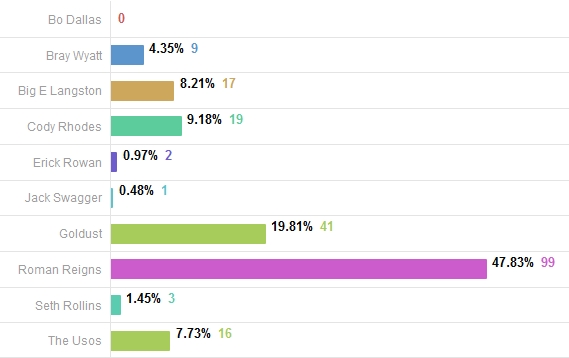 The powerhouse of The Shield is an easy choice here with almost half the vote, well ahead of the comeback of the year in Goldust and his kid brother. Surely only good things to come for Roman.

The TWO/W101 Awards have taken place since 2002, and since then Wrestlemania has always, ALWAYS won PPV of the year, usually by a significant margin. It’s like death and taxes. Now, after twelve years at the top, Summerslam has staged a coup and broken the streak. And all it took was having one of the best PPVs in company history. 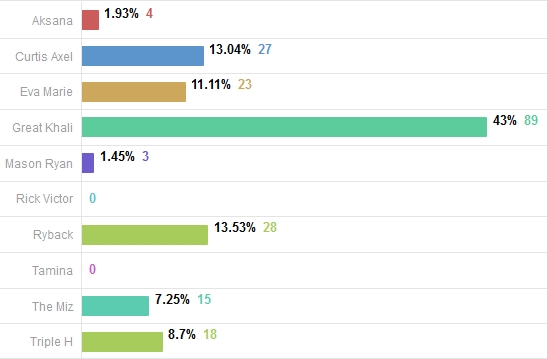 This award is kind of his to lose isn’t it? The poor bugger. But hey, if WWE keep wheeling out a man who can’t walk to the ring, they deserve what they get. That Ryback/Axel team sure is a popular one too.

A mediocre undercard, one lone highlight and the mother of all worthless PPV finishes added up to quite a lame card. All of the top four were shows that ended with screwy bullshit finishes. Funny that.

John Cena vs The Rock (WrestleMania 29) 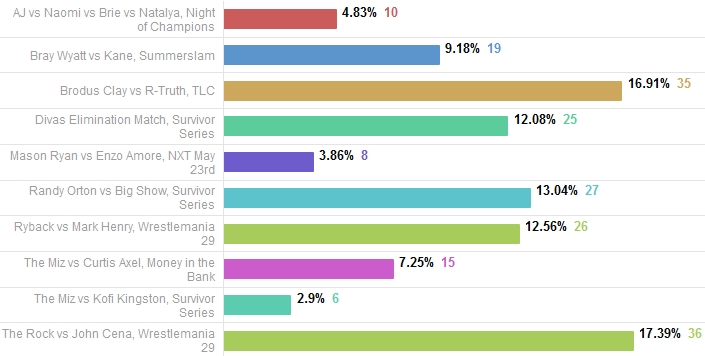 There’s nothing like a big Wrestlemania match to disappoint you when it all goes pear-shaped. Rock vs Cena II was a swing and a miss, so much so that it beat Eva Marie’s attempt at wrestling.

Real life death used to prop up a wrestling angle, turning Big Show into a weepy teenage girl, WWE comedy, pushing Curtis Axel…there was plenty to be offended about this year. Exploiting death takes the cake though.

Not running with Daniel Bryan on top

We still want Bryan, and we still want him now. If you look at all of the top six, they seem to have a general theme of unhappiness at the same old guys being pushed ahead of fresh main event talent. Except Axel. Don’t push him, ever.

‘GET OFF MY TV’ AWARD

Once again the big friendly immobile giant gets no love from the W101 Universe, ahead of other repellent atrocities like the omnipresence of the WWE App, and of course, Curtis Axel.

So there we have it, the brightest bulbs and smelliest turds of 2013, all wrapped up in a neat little bow. Huge thank you again to everyone who voted, making this a record-setting year for the Awards.