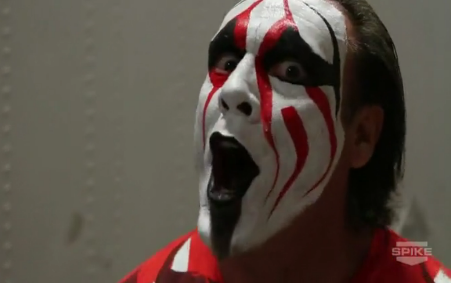 According to WrestlingInc.com, WWE is confident that current TNA mainstay, Sting, will inevitably find his way to the WWE for the first time in his legendary career come 2014. Naturally, Sting being under contract with TNA has prevented any actual discussions between WWE and Sting, but Sting has sent ‘feelers’ expressing his interest in making his WWE debut. Triple H was reportedly against Sting re-signing with TNA in November as WWE was already making big plans for the former WCW World Heavyweight Champion, which would include a merchandising deal, DVD releases, and, more than likely, Sting’s long-awaited induction into the WWE Hall of Fame. Unfortunately for those within WWE, Sting did re-sign with TNA, keeping him the company throughout much of 2013, but with Sting’s contract set to expire this November, WWE will certainly be doing their best to court the wrestling legend. Right now, WWE is setting the subtle groundwork for Sting’s arrival with mentions on WWE.com and on their DVD’s, even strategically mentioning Sting in their look at past World Heavyweight Champions on last week’s RAW.

Do you want to see Sting in the WWE? Post your comments in the box below.