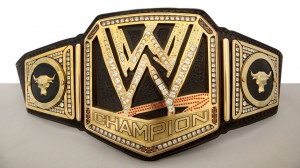 This is the brand new WWE Championship belt that debuted on last night’s RAW. The reigning champion, The Rock, unveiled the new belt during the last segment of the show, but the belt you see before you is the final result of a production that has been in the works for months (around a year and a half, to be exact). An unfinished photo of the championship belt was shown online and the rumors immediately began swirling that then-champion CM Punk would be the one to ditch the old spinner belt for the new belt.

WWE.com has an article up looking at the development of the new title belt and the article mentions that the custom motorcycle technicians behind the show, “American Chopper”, were crucial in the creation of the new title belt. In a creative process that took approximately 540 days and cost upwards of $50,000, those in charge of creating the belt within the WWE reached out to Orange County Choppers and Paul Teutel, Sr. and his boys went to work on doing their part for the WWE Title design, most notable creating the large WWE “scratch” logo for the belt.

This is the first time that the WWE Title belt has changed significantly since April 2005 when John Cena introduced the spinner championship (though, since No Mercy in 2007, the logo in the middle was stabilized and remained that way until last night’s RAW). There are two versions of the new belt; the one pictured above and the other is one with WWE logos in place of The Rock’s Brahma Bull logos on the sides.

What do you think of the new WWE Title belt? Post your comments in the box below.