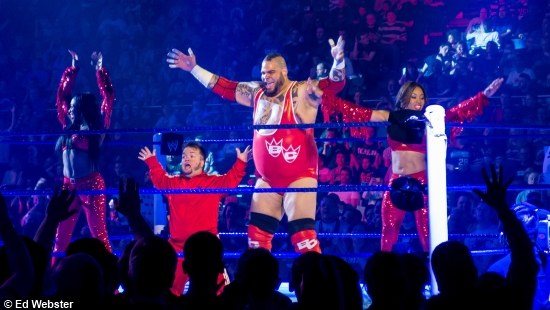 The nineteenth edition of WWE Main Event came to you from the Jacksonville Veterans Memorial Arena in Jacksonville, FL. Before he joins John Cena and Ryback to battle The Shield in a 6-Man Tag Match in less than two weeks at Elimination Chamber, “The Celtic Warrior” Sheamus would go one-on-one with “The Mustachioed Marvel” Cody Rhodes.

Before going one-on-one with Sheamus in the main attraction of Main Event, Cody Rhodes says that the upcoming Elimination Chamber Match is becoming a “comic work of improbable situations”. Michael Cole reminds Rhodes that he has a match with Sheamus, but Rhodes says that his match will not take place until they address the biggest issue in the WWE right now. Rhodes continues, saying that the six former World Champions that will compete in the Elimination Chamber Match are “failures”. Rhodes then grabs a steel chair, taking a seat in the middle of the ring, refusing to leave until SmackDown General Manager Booker T comes out there and puts him in the Elimination Chamber Match. However, Michael Cole tells Rhodes that Booker is not in the arena tonight, but Rhodes insists, telling Cole to text or email Booker to get him there. Rhodes’ opponent, Sheamus, then comes out, telling Rhodes that they have a match right now, so he should take a Brogue Kick “like a man” and give the people what they want to see. Rhodes refuses to budge, saying that unless his name is Booker T, he is not interested in talking to him. After doing his best impersonations of Booker T, Vickie Guerrero, and even WWE Chairman Mr. McMahon, Sheamus gets a cheap-shot from Cody Rhodes, who quickly exits the ring.

The featured match on WWE Main Event would see “The Celtic Warrior” Sheamus going one-on-one with “The Mustachioed Marvel” Cody Rhodes. In the end, it was Sheamus blasting Cody Rhodes with the Brogue Kick en route to picking up the win.

One-half of the WWE Tag Team Champions was in action on Main Event as Daniel Bryan went one-on-one with his former rival, “The Intellectual Savior of the Masses” Damien Sandow. During the match, Daniel Bryan’s tag team partner, Kane, would come out and, as payback for Bryan costing him his match on RAW, Kane comes out, setting off his ring pyro. This distracts Daniel Bryan long enough for Damien Sandow to take advantage, hitting the Terminus en route to picking up the win.