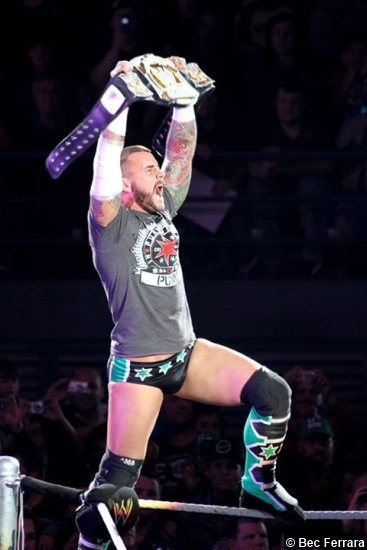 A new landmark in WWE history is created as the premiere episode of WWE Main Event came to you from the BOK Center in Tulsa, OK. On the world premiere of Main Event, the show would feature a first time ever, Champion vs. Champion Match as WWE Champion CM Punk faces World Heavyweight Champion Sheamus! Plus, the tournament to determine the new #1 Contenders for the WWE Tag Team Titles continues as Zack Ryder & Santino Marella face Tyson Kidd & Justin Gabriel with the winning team facing Rhodes Scholars in the Semi-Finals.

The debut episode of WWE Main Event kicks off with Michael Cole and Intercontinental Champion The Miz in the middle of the ring as Cole and Miz welcome everyone to the show, promoting the main event of WWE Champion CM Punk vs. World Heavyweight Champion Sheamus. Cole & Miz then introduce a video package highlighting the rise to stardom of CM Punk, followed by a video package hyping Sheamus.

The inaugural episode of Main Event kicks off with a huge match as, for the first time ever, WWE Champion CM Punk, with Paul Heyman in his corner, went one-on-one with World Heavyweight Champion Sheamus in a Champion vs. Champion Match. During the course of the match, CM Punk exposes the steel turnbuckle in the corner and the WWE Champion would use it to his advantage as, when Sheamus goes for the Brogue Kick on Punk, Punk trips Sheamus up with a drop toe hold, which results in Sheamus’ head making contact with the exposed steel. Punk then pins Sheamus, grabbing the tights for added leverage, picking up a tainted win over the World Heavyweight Champion. After the match, Sheamus comments on the loss, saying that all he has heard in recent months is about CM Punk wanting respect. Sheamus then says that, the way Punk just won, the WWE Champion does not deserve to be respected. Sheamus then vows that, next time they meet, he will put Punk down with the Brogue Kick.

Moments after his victory over Sheamus, WWE Champion CM Punk is questioned about the questionable win, but Paul Heyman answers, saying that Punk just defeated the World Heavyweight Champion and that should get Punk all the respect he deserves.

Then it was time for the main event of WWE Main Event as, in a First Round Match in the #1 Contenders Tag Team Tournament, Zack Ryder & Santino Marella faced Tyson Kidd & Justin Gabriel. In the end, it was Santino Marella striking Justin Gabriel with the Cobra en route to picking up the win for himself and Zack Ryder as they join Rey Mysterio & Sin Cara and Rhodes Scholars in the Semi-Finals of the #1 Contenders Tag Team Tournament.

What did you think of the debut of WWE Main Event? Post your comments in the box below.