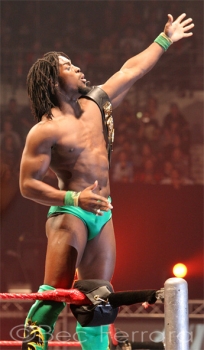 The third edition of WWE Main Event came to you from the FedExForum in Memphis, TN. In the first title match in Main Event history, the brash, self-proclaimed “most must-see” Intercontinental Champion The Miz would defend the legendary title against the man who defeated him in a non-title match on RAW, Kofi Kingston, as Kofi tries to prove to The Miz that he is much better than a “b-player”!

In the middle of Michael Cole and John “Bradshaw” Layfield hyping the main event, Intercontinental Champion The Miz, sporting six stitches in his forehead following Trouble in Paradise from Kofi Kingston on RAW, makes his way to the ring. The Miz says that he is “breath-taking” and “mesmerizing” and the Intercontinental Title means something again and it is all because of him before Miz introduces a video package highlighting his career.

The time for talk was then over as it was time for the first title match in Main Event history as The Miz defends the Intercontinental Championship against Kofi Kingston. Throughout the match, The Miz would use every trick in the book to try and beat Kofi Kingston by hooking the tights, attempting to walk out on the match, and putting his feet on the ropes for added leverage. However, an argument with the referee over the latter attempt would end up costing The Miz as Kofi blasts Miz with Trouble in Paradise en route to Kofi winning the Intercontinental Title for the fourth time in his career! After the match, the new Intercontinental Champion proclaims that the “beast” is out, saying that he knew he was in for the fight of his life and he is honored to be the new Intercontinental Champion. Kofi continues that it is not just about him, it is about the fans before a fired-up Kofi leads the fans in giving one last message to The Miz with a “boom, boom, boom”!

Moments after losing the Intercontinental Title to Kofi Kingston, The Miz commented on his title loss backstage, saying that the title belongs to him and losing it is like losing an “organ”. Miz then claims that he did not lose the title, saying that the title loss is a “miscarriage of justice”. Miz then says that he wants his rematch for the Intercontinental Title, vowing to reclaim what is his.

After guaranteeing that he will cash in his Money-in-the-Bank contract in eleven nights at Hell in a Cell, the main event of the evening saw “Mr. Money-in-the-Bank” Dolph Ziggler, with Vickie Guerrero in his corner, went one-on-one with Zack Ryder. In the end, it was Dolph Ziggler hitting the Zig Zag on Zack Ryder en route to picking up the win. After the match, Vickie Guerrero proclaims that everyone should be talking about Dolph Ziggler because he could be the next World Heavyweight Champion. Dolph then says that he deserves “better” than having to face Zack Ryder before “Mr. Money-in-the-Bank” confidently challenges anyone in the locker room to a match on next week’s Main Event. However, the man who answers the call changes the mood of Dolph Ziggler as none other than the #1 Contender for the WWE Title at Hell in a Cell, the undefeated, unstoppable “Sin City Cyborg” Ryback accepts Ziggler’s challenge!