Now that the WWE seems to have taken over wrestling not only in the USA and the rest of North America, but also the rest of the world, it is often forgotten that many other countries used to have their own professional wrestling traditions. The UK in particular had a thriving wrestling scene which had its heyday in the 70s and 80s. This article will attempt to introduce you to some of the key players and interesting factoids about the sport which gripped Britain with wrestling fever. 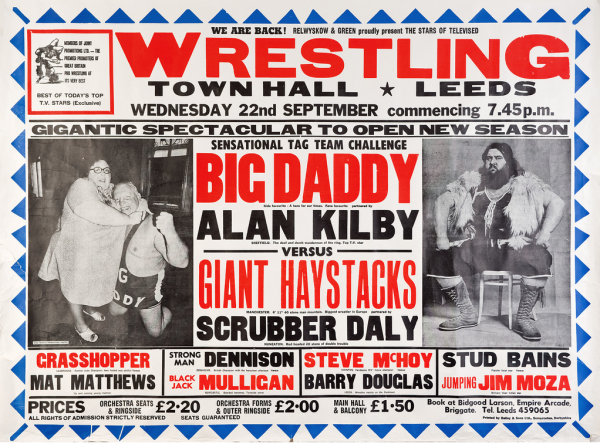 Wrestling has been a popular sport in the UK for hundreds of years and has always had a lot of connection with the sport in the US. In the late 19th century, the famous Michigan wrestler Jack Carkeek made many famous bouts in England, and in the early 20c Estonian-born, London-based Georg Hackenschmidt was one of the first wrestlers to introduce showmanship to the sport, he also travelled to the USA where he beat American Heavyweight Champion Tom Jenkins. But just as the internet turned poker into partypoker and other online poker sites, television changed wrestling too by bringing it into the living rooms of the masses.

Wrestling was first shown on television in the UK in 1955, and became a regular even in 1964. But it was in the seventies that some of the most enduring personalities of the sport were created. First of these was Max Crabtree a wrestling entrepreneur who brought into existence the legendary Big Daddy who came to symbolize the power of wrestling in the UK. This larger than life character started off as a heel, but soon became an exceptionally popular face. Daddy’s real name was Shirley Crabtree, it was his brother Max who came up with his Big Daddy persona.

Some of The Stars of The Golden Years

Big Daddy’s favourite move was to bounce his opponents off his considerably sized stomach, and this would send the crowd wild whenever he fought. However there were other stars in the world of British wrestling at the time. The most famous of these was Giant Haystacks who was Big Daddy’s arch enemy. ‘Giant’ was the relevant word here – he was 6’11” and weighed a massive 670 lb at his heaviest. Saturday nights in the UK (which at the time had only 3 TV channels) were not complete without watching the Daddy/Haystacks bout. Kendo Nagasaki (or Peter Thornley as his mother called him) was another great UK heel and one who wore a mask, who used to knock out opponents with his famous ‘Kamikaze Crash’.

Finally, we shouldn’t forget Rollerball Rocco (real name Mark Hussey), a fourth-generation wrestler, who also wrestled under the name Black Tiger in Japan. He has been commemorated in the song by British singer Luke Haines ‘Inside The Restless Mind Of Rollerball Rocco’, from his album ‘Nine And A Half Psychedelic Meditations On British Wrestling Of The 1970s And Early ’80s’ – a must for wrestling fans.