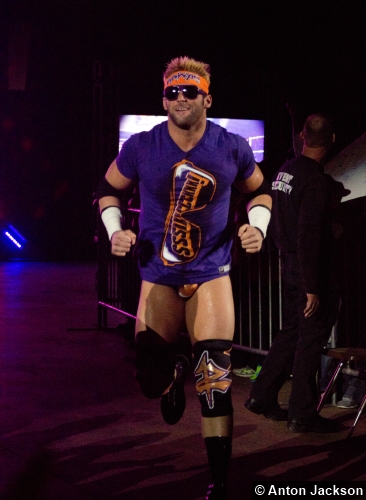 On the eve of Independence Day, the 672nd edition of SmackDown would celebrate the red, white, and blue as Super SmackDown Live: The Great American Bash came to you, live, from the American Bank Center in Corpus Christi, TX. This special celebration of America would be headlined by The Great American Bash 20-Man Battle Royal featuring WWE Champion CM Punk, World Heavyweight Champion Sheamus, the #1 Contender for the WWE Title Daniel Bryan, the #1 Contender for the World Heavyweight Title Alberto Del Rio, “The World’s Largest Athlete” Big Show, “The Big Red Monster” Kane, and even John Cena with the winner of the star-studded main event earning control of next week’s SmackDown! With Damien Sandow, Tyson Kidd, Intercontinental Champion Christian, United States Champion Santino Marella, and “The Master of Destruction” Tensai already in, the final four participants in the World Heavyweight Championship Contract Money-in-the-Bank Ladder Match would be determined on Super SmackDown Live. After months of having to witness Antonio Cesaro put the moves on his former love interest, Aksana, this week’s Interim General Manager, Theodore Long, will get a measure of payback as the Interim GM forces Antonio Cesaro and Aksana to team up to face “The Punjabi Giant” The Great Khali and Divas Champion Layla in a Mixed Tag Match.

Before the show officially gets underway, several Superstars and Divas are partying it up at The Great American Bash barbecue when this week’s Interim General Manager, Theodore Long, tells them not to worry about making a mess because he’s got someone to clean everything up as the Interim GM presents an unhappy Eve. United States Champion Santino Marella then tries to light the grill, but is unable to do so, so a monster who is no stranger to fire, Kane, comes in and lights the grill.

Twelve nights before he challenges Sheamus for the World Heavyweight Title at Money-in-the-Bank, Super SmackDown Live kicks off with the #1 Contender for the World Heavyweight Title, Alberto Del Rio. Del Rio states that he is not there to talk about America, he is there to talk about something much more important, himself. Del Rio then vows to take the World Heavyweight Title from Sheamus and send him “crying” back to Ireland. Del Rio continues that Americans are always trying to “take advantage” of hard-working people like him, saying that he came to the United States “legally”, adding that the American people make him “sick”. Del Rio then says that he wishes he could send all of the fans back to where they “belong” before he exits the ring, confronting some of the fans in attendance, accusing them of being there “illegally” and ordering them to show him their “papers”. Del Rio then targets one fan in particular, demanding that security kick him out of the arena because the fan is there illegally. The fan boldly tells the #1 Contender that they are not in Arizona, they are in Texas. Del Rio then looks like he is ready to remove the fan himself when Sheamus marches out, tossing Ricardo Rodriguez to the side to get to Del Rio. Sheamus gets the better of Del Rio, but a brief distraction by Rodriguez allows Del Rio to gain the advantage. Rodriguez then opens the hood of Del Rio’s car before Del Rio lays Sheamus on the engine, repeatedly slamming the hood into the head, neck, and spine of the World Heavyweight Champion!

Per the orders of Interim General Manager Theodore Long, Antonio Cesaro and his girlfriend, Aksana, would have to face “The Punjabi Giant” The Great Khali and Divas Champion Layla in a Mixed Tag Match in the opening bout of Super SmackDown Live. In the end, it was Layla hitting the Lay Out en route to the Divas Champion picking up the win for herself and The Great Khali.

Backstage, Cody Rhodes informs Theodore Long that the WWE Board of Directors has accepted Rhodes’ appeal and has granted Rhodes a second opportunity to qualify for the World Heavyweight Championship Contract Money-in-the-Bank Ladder Match. Long, in turn, informs Rhodes that the Board has entrusted him to select Rhodes’ opponent and that opponent will be someone who has already qualified for the match, a man who Rhodes has never defeated as Rhodes must defeat Intercontinental Champion Christian to qualify.

With three spots left open, another Money-in-the-Bank Qualifying Match took place on Super SmackDown Live as “The Show Off” Dolph Ziggler, with Vickie Guerrero in his corner, went one-on-one with Alex Riley. Despite a couple of near-falls for Alex Riley, Dolph Ziggler was able to hit the Zig Zag on Alex Riley en route to picking up the win and qualifying for the World Heavyweight Championship Contract Money-in-the-Bank Ladder Match.

After her shocking actions on RAW where she shoved CM Punk off of the top rope, who fell on top of Daniel Bryan as both men were sent crashing through a table, the unhinged A.J. would do a special interview with commentator Michael Cole. Cole asks what A.J. was thinking, but Cole does not allow A.J. to answer, saying that A.J. switches allegiances “on a dime”. Cole continues that the WWE Board of Directors made a “huge mistake” in naming A.J. the Special Referee for the WWE Title match at Money-in-the-Bank, calling A.J. a “troubled little girl”. Cole says that A.J. is “delusional”, saying that he does not understand what A.J. sees in either CM Punk or Daniel Bryan. Cole then says that A.J. should get a “real man”, a man of “fame and fortune”, saying that he is a “physical specimen”. Cole is then interrupted by the #1 Contender for the WWE Title, Daniel Bryan, who says that Cole thinks that he is some sort of “tough investigative reporter”, but Cole is a “sexist bully”. Bryan continues that this “story” is not about Cole, saying that he knows A.J. better than anyone and he knows that A.J. is going to do an “excellent job” as Special Referee at Money-in-the-Bank and he also knows that she did not want both of them to go through the table on RAW as she only wanted CM Punk to go through it.

WWE Champion CM Punk then gingerly makes his way to the ring, telling Michael Cole to get out of the ring because it has nothing to do with him, which a frightened Cole does. The WWE Champion then tells A.J. that his body feels wrecked, but that is what is expected as a WWE Superstar. Punk then says that he is not going to take the Daniel Bryan route as he is not going to “suck up” to A.J. because she is the Special Referee. The WWE Champion then says that he is going to be blunt, telling A.J. that she is not in a “good place, mentally”, advising A.J. to get “professional help”. Punk continues that he is not going to string A.J. along to get what he wants. Bryan jumps in, accusing Punk of not caring about A.J., claiming that he does care. Bryan continues, saying that Punk “needs” A.J. in order to defeat Bryan at Money-in-the-Bank. Champion and challenger then look ready to fight, but A.J. stands between the two of them before passionately kissing Daniel Bryan in front of CM Punk, who leaves the ring. However, A.J. catches up with the WWE Champion on the outside of the ring, locking lips with Punk as well! A.J. then skips away from the ring, again leaving many more questions than answers.

In honor of Independence Day, United States Champion Santino Marella teams with two legendary American stars in Hall of Famers Sgt. Slaughter & “Hacksaw” Jim Duggan as they faced the international team of Hunico, Camacho, & Drew McIntyre in a 6-Man Tag Match. In the end, it was Santino Marella hitting the Cobra Strike on Hunico en route to picking up the win for his team.

Backstage, Damien Sandow halts The Great American Bash barbecue, but Zack Ryder takes exception and the two Superstars brawl backstage as Ryder gets the better of Sandow. Ryder then goes to throw a bowl of punch at Sandow, but Sandow ducks and Eve gets soaked!

“The Undefeated War Machine” would get his first real challenge since his SmackDown debut as Ryback would go one-on-one with former WWE Tag Team Champion Curt Hawkins, with Tyler Reks in his corner. Despite facing a former champion, Ryback was able to dominate Curt Hawkins, hitting Shell Shocked on Hawkins en route to picking up the win.

Then it was time for the main event as 20 of the WWE’s top Superstars would compete in The Great American Bash 20-Man Battle Royal with the winner taking control of next week’s SmackDown as the Interim General Manager. The 20-Man Battle Royal was made up of John Cena, WWE Champion CM Punk, the #1 Contender for the WWE Title Daniel Bryan, the #1 Contender for the World Heavyweight Title Alberto Del Rio, “The World’s Largest Athlete” Big Show, “The Big Red Monster” Kane, Dolph Ziggler, Cody Rhodes, Intercontinental Champion Christian, Damien Sandow, The Great Khali, Heath Slater, Ezekiel Jackson, Tyson Kidd, Tensai, Brodus Clay, Zack Ryder, Justin Gabriel, United States Champion Santino Marella, & WWE Tag Team Champion Kofi Kingston with World Heavyweight Champion Sheamus unable to compete due to the attack by Alberto Del Rio earlier in the show. The first Superstar to go was Justin Gabriel as Big Show eliminates the high flyer before Show eliminates Brodus Clay, as well. Tensai then racks up an elimination, sending Ezekiel Jackson over-the-top rope. A major threat in the match was then eliminated as Tensai, Jack Swagger, and Alberto Del Rio worked together to eliminate The Great Khali from the match. Zack Ryder eliminates Damien Sandow before Cody Rhodes eliminates Santino Marella. Big Show then resumes his dominance by eliminating both Cody Rhodes and Kofi Kingston! With Superstars like Heath Slater and Jack Swagger getting eliminated during the commercial break, the battle royal was certainly thinning out, even more so once CM Punk sacrifices himself to eliminate Daniel Bryan as the WWE Champion takes himself and Bryan over the top rope. John Cena then scores his first elimination, sending Alberto Del Rio out of the match before managing to hoist Tensai over the top rope. However, Big Show takes advantage, eliminating John Cena! Big Show was only getting started, however, as Show sends Christian soaring over the top rope. Dolph Ziggler then tries to put Big Show to sleep, but Kane sees an opening and eliminates both Dolph Ziggler and Big Show, leaving only Kane and Zack Ryder! Then, in a major upset, Zack Ryder uses Kane’s own momentum to send “The Big Red Monster” over the top rope to the outside to pick up the win and earn the right to be the General Manager of next week’s SmackDown for one night only!

What did you think of Super SmackDown Live: The Great American Bash? Post your comments in the box below.