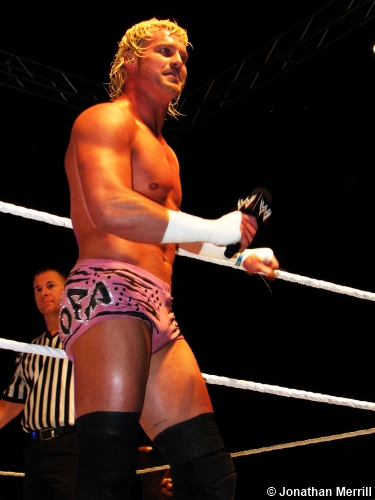 Show-Off Gets Showed Up.

Five nights after the People Power era came to an end at No Way Out, the 670th edition of WWE Friday Night SmackDown came to you from the 1st Mariner Arena in Baltimore, MD. After unsuccessfully challenging Sheamus for the World Heavyweight Championship at No Way Out, Dolph Ziggler would get the opportunity to prove that he deserves to remain in title contention as “The Show-Off” goes one-one with World Heavyweight Champion in a non-title match. Also, after both men failed to win the WWE Championship in a Triple Threat Match at No Way Out, “The Big Red Monster” Kane would face “The Yes Man” Daniel Bryan. With both RAW and SmackDown lacking a permanent General Manager, the WWE Board of Directors will name a different Interim General Manager for both shows every week and this week’s Interim GM, Mick Foley, would make an appearance on SmackDown.

Now a free man due to John Laurinaitis’ firing at No Way Out, the show kicks off with an ecstatic Theodore Long as Long happily reminds everyone that “Big Johnny” is no longer in charge of RAW and SmackDown and that “The Hardcore Legend” Mick Foley is in charge of RAW & SmackDown for the week. Long is then interrupted by the arrival of the man who lost to John Cena in a Steel Cage Match at No Way Out, resulting in Laurinaitis’ dismissal, as “The World’s Largest Athlete” Big Show makes his way to the ring. Big Show states that he does not care about John Laurinaitis and he does not care about the fans, the only person he cares about is himself. Show then congratulates John Cena on winning at No Way Out, citing that Cena used the help of five of Cena’s “cronies”. Big Show then says that Cena would not hold up in a one-on-one fight against him. Show continues that he is moving on and he no longer cares about Cena before Big Show reveals that he is going to take part in the RAW Money-in-the-Bank Ladder Match at WWE Money-in-the-Bank on July 15 and, after he wins the Money-in-the-Bank briefcase, he will cash it in and win the WWE Title, a title Show says he will never lose. Big Show then says that he will win the title and the WWE Championship is all his!

Big Show is then met by the man who helped cost Big Show the Steel Cage Match at No Way Out as a determined Brodus Clay makes his way to the ring, ready to fight! Brodus then takes it to Big Show, pummeling “The World’s Largest Athlete” before David Otunga interferes, chopping the injured knee of Brodus. “The Funkasaurus” was then at the mercy of Big Show as Show toys with Brodus, methodically and repeatedly kicking the bandaged knee as Otunga looks on approvingly. Big Show then palms Brodus’ head, lifting “The Funkasaurus” up before knocking him out with the W.M.D. After Big Show exits the ring, David Otunga taunts the knocked out Brodus Clay, saying that he is going to call Brodus’ “mama” before the Harvard Law graduated does his lame version of Brodus’ Pterodactyl dance routine.

Two more poor unknown wrestlers would be fed to Ryback as “The War Machine” faced Frank Venezia & Jared Wachtler in a 2-on-1 Tornado Handicap Match. It was another easy night for Ryback as the undefeated powerhouse hits the Double Machine Buster before piling both men up and pinning Frank Venezia for the win.

Backstage, Vickie Guerrero informs Interim General Manager Mick Foley that, next week, she will be in charge of both RAW and SmackDown as the Interim GM. What will Vickie Guerrero have in store for both shows? How will her “client”, Dolph Ziggler, benefit?

After both men failed to win the WWE Championship at No Way Out, “The Big Red Monster” Kane went one-on-one with “The Yes Man” Daniel Bryan, with A.J. serving as the guest timekeeper. During the match, Daniel Bryan locks in the Yes Lock on Kane and, as Kane nears the ropes, A.J. rings the bell! However, the referee waves this off and the match continues. Kane then takes advantage of an argument between Bryan and the referee, planting Bryan with the chokeslam en route to picking up the win!

The Special Guest Interim General Manager for the week, Mick Foley, appears on SmackDown. The Interim GM thanks John Laurinaitis for being fired so that he can be the weekly, but Foley is quickly interrupted by “The One-Man Band” Heath Slater. Slater states that he is out there to lead a “protest” as he was embarrassed by Roddy Piper and Cyndi Lauper on RAW. The Interim GM responds by revealing Slater’s opponent, “The Long Island Iced Z” Zack Ryder.

Backstage, A.W. & The Prime Time Players are celebrating their victory when they are confronted by A.W.’s former clients, Primo & Epico, who attack Darren Young & Titus O’Neil before referees separate the two teams.