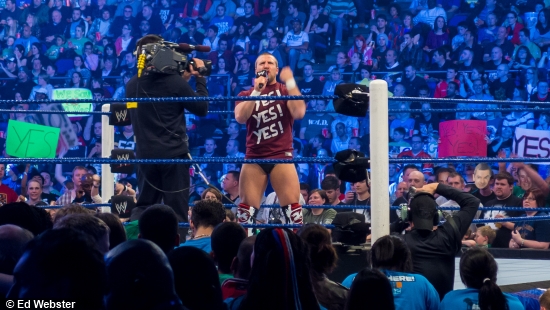 Five nights after an unforgettable Survivor Series, the 640th edition of WWE Friday Night SmackDown came to you from the Mohegan Sun Arena at Casey Plaza in Wilkes-Barre, PA. Five nights after having his ankle destroyed with a steel chair by Big Show after getting himself disqualified to keep the World Heavyweight Title, SmackDown would feature an update on the status of World Heavyweight Champion Mark Henry and the state of the World Heavyweight Championship. Also, after Zack Ryder laid Dolph Ziggler out with the Rough Ryder Leg Lariat at Survivor Series, “The Long Island Iced Z” would team with “The Great White” Sheamus to face United States Champion Dolph Ziggler and “The All-American American” Jack Swagger.

Five nights after having his ankle destroyed with a steel chair by Big Show moments after getting himself intentionally disqualified in order to keep the World Heavyweight Title, SmackDown kicks off with World Heavyweight Champion Mark Henry as “The World’s Strongest Champion” makes his way to the ring with the assistance of a crutch! The wounded champion states that Big Show injured him and that the fans are happy about it before asking “who does this kind of stuff?” Henry continues that it is not the “treatment” that a champion deserves before saying that he is “hurt”, but he is “not broken”. The World Heavyweight Champion then claims that he kicked Big Show in the knee, but Show wanted to make Henry look like the “bad guy”, adding that he is out there to “set an example” for all the kids that a “champion fights through injuries”. Henry continues that he wanted to compete, but the doctors, as well as SmackDown General Manager Theodore Long would not clear him to compete, adding that he is the “world’s toughest man” and is still the World Heavyweight Champion.

The man who injured World Heavyweight Champion Mark Henry then makes his way to the ring as “The World’s Largest Athlete” Big Show makes his way to the ring. Big Show tells Mark Henry to “stop lying” because Henry knew what he was doing with that low blow at Survivor Series before saying that he simply did to Mark Henry what Henry did to him back in July. Henry responds by calling Big Show “the world’s largest loser” and Show fires back, knocking Henry out with the W.M.D.!

Things then went from bad to horrible for Mark Henry as “Mr. Money-in-the-Bank” Daniel Bryan rushes out with a referee in tow, hastily handing over the briefcase and telling the referee to start the match! Then, in the defining moment in the rocky career of Daniel Bryan, Bryan struggles to turn over the unconscious Mark Henry before pinning Henry to be crowned the brand new World Heavyweight Champion! Daniel Bryan then celebrated in the ring, even going to the outside of the ring to stand on top of the announce table, holding the title high in front of his biggest critic, Michael Cole.

However, Daniel Bryan’s world would come crashing down as SmackDown General Manager Theodore Long rushes to the ring to inform Daniel Bryan that, since Mark Henry was not cleared to compete, the impromptu World Heavyweight Title match should not have taken place and, as a result, Daniel Bryan is not the World Heavyweight Champion! After giving the title back to Mark Henry, the GM hands the Money-in-the-Bank briefcase back to Bryan, telling the disappointed Superstar that he can still cash it in in the future. Long then announces that Bryan will get the opportunity to get a title shot as he, along with Wade Barrett, Intercontinental Champion Cody Rhodes, and Randy Orton, will compete in a Fatal 4-Way Match with the winner challenging Mark Henry for the World Heavyweight Title in a Steel Cage Match on a special live Holiday edition of SmackDown this Tuesday night! Can Daniel Bryan earn the World Heavyweight Title match or will Wade Barrett, Cody Rhodes, or Randy Orton get the opportunity?

It was announced prior to the opening match that, the winner of the World Heavyweight Title Steel Cage Match on the Holiday edition of SmackDown this Tuesday night will defend the gold against Big Show on December 18 at WWE TLC!

The opening match of the night saw Justin Gabriel going one-on-one with Hunico. In the end, it was Hunico hitting the senton off the top rope en route to picking up the win.

With Alicia Fox a guest on commentary, Divas Champion Beth Phoenix & Natalya faced A.J. & Kaitlyn in a rematch from last week’s SmackDown. It was a short match, however, as, with Kaitlyn watching from the apron, Natalya locks in the Sharpshooter on A.J., forcing A.J. to tap out. After the match, Kaitlyn would look at her supposed friend with disgust before leaving A.J. alone with Beth Phoenix & Natalya as Natalya locks in the Sharpshooter on A.J. again, while the Divas Champion tries to get A.J. to scream in pain into the microphone. However, Alicia Fox enters the ring, making Natalya & Phoenix decide to leave the ring. What is the story between Kaitlyn and A.J.?

Backstage, SmackDown General Manager Theodore Long is talking on the phone, telling the person on the other end that three-time WWE Champion Mick Foley will be on the live Holiday edition of SmackDown next week as the host of the show! Following this big news, World Heavyweight Champion Mark Henry barges into the GM’s office, angry over being put in a World Heavyweight Title match next week, but the GM has more bad news for the champion as Theodore Long informs Mark Henry that his title defense will take place inside a Steel Cage. The furious champion then storms out of the office, but not before delivering the ominous warning to Long, “you’re going to get yours”!

Ted DiBiase was in action on SmackDown as DiBiase went one-on-one with Heath Slater. Before the match got underway, Jinder Mahal appeared on the Tron, criticizing Ted DiBiase for deciding to hang out with the WWE fans when he is so rich. Despite Jinder Mahal trying to get inside the head of DiBiase, DiBiase would hit Dream Street on Heath Slater en route to picking up the win.

After throwing water in the face of commentator Booker T on RAW, Intercontinental Champion Cody Rhodes explained his actions in a backstage interview. Rhodes states that he did not throw water into the face of a six-time World Champion or a former King of the Ring, he threw the water in the face of a “lowly commentator”. Rhodes continues that, during his match on RAW, he saw a “disparaging, mocking look” on the face of Booker T, so he did something about it. Rhodes then states, that without his mask, he is “free”, adding that he can do “anything” he wants. Rhodes then calls Booker T a “mentally-limited WWE commentator” before mocking Booker by saying “I can dig that, sucka”.