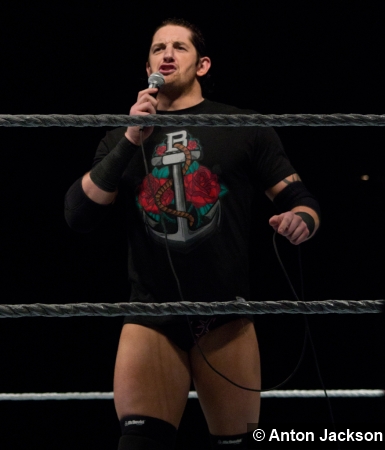 Thumbs up for Wade Barrett.

The 638th edition of WWE Friday Night SmackDown came to you from the Echo Arena Liverpool in Liverpool, England. Nine nights before he defends the World Heavyweight Title against Big Show at Survivor Series, World Heavyweight Champion Mark Henry went one-on-one with “Mr. Money-in-the-Bank” Daniel Bryan in a rematch from last week’s SmackDown, which ended with Daniel Bryan coming within moments of cashing in his Money-in-the-Bank contract.

Nine nights before he leads Team Orton to face Team Barrett in a Traditional 5-on-5 Survivor Series Elimination Tag Match at Survivor Series, SmackDown kicks off with “The Viper” Randy Orton. Orton explains that when SmackDown General Manager Theodore Long informed him that he would be leading a team in a Survivor Series Elimination Tag Match, he had his doubts because he has a history of not playing well with others. Orton continues that he has “no problem” leading the team and he has no problem giving Cody Rhodes another beating or shutting Christian’s mouth for good, adding that he does not know much about Jack Swagger and he knows nothing about Hunico, but he has no problem taking them out if they get in his way. Before “The Viper” can address the leader of the opposing team, the leader of Team Barrett, Wade Barrett, interrupts Randy Orton and makes his way to the ring. Barrett tells Orton that he will give Orton major problems at Survivor Series, adding that he is a “natural-born leader”. Barrett then calls Orton a “natural-born predator”, saying that no one can trust Orton. Barrett continues that the one thing he is yet to achieve is to win the World Heavyweight Title and, to get there, he needs to beat Orton and that is why Team Barrett will emerge victorious at Survivor Series. Orton admits that he was not listening to Barrett because he was thinking about bouncing Barrett’s head off the mat with an RKO.

Wearing a neck brace after being chokeslammed by Big Show last week, Christian interrupts, thanking Wade Barrett for volunteering himself to replace him in the match against Sheamus last week. Christian continues that he declined being the leader of the team because he did not want his “health concerns” to be a distraction, adding that Barrett has his full endorsement as the team captain. Christian then threatens Orton, but Orton fires the first shot, but the two-on-one odds catch up to Orton. Fortunately for “The Viper”, Sheamus rushes out to make the save before SmackDown General Manager Theodore Long comes out and announces that Christian will go one-on-one with Sheamus in the opening match. The GM then announces that the main event will be a Captain vs. Captain Match when Randy Orton goes one-on-one with Wade Barrett. With nine nights to go until Survivor Series, which Team Captain will show the rest of their team that they deserve to be the leader?

Per the orders of SmackDown General Manager Theodore Long, the opening match of the night saw “The Great White” Sheamus went one-on-one with “Mr. One More Match” Christian. In the end, it was Sheamus planting Christian with the Celtic Cross en route to picking up the win.

“The Leader of the DiBiase Posse” was in action on SmackDown as Ted DiBiase went one-on-one with Jinder Mahal. In the end, it was Ted DiBiase hitting Dream Street on Jinder Mahal en route to picking up the win.

With World Heavyweight Champion Mark Henry watching from the stage, “The World’s Largest Athlete” Big Show faced three local competitors from Liverpool in a 3-on-1 Handicap Match. Big Show takes out two of the three with a double chokeslam, but when the third competitor tried to escape, Big Show caught up to him and laid him out with the W.M.D. in the middle of the ring en route to picking up an easy and impressive win. After the match, Mark Henry vows that, at Survivor Series, he will give Big Show a “lasting impression”.

With Natalya a guest on commentary, Alicia Fox, with Aksana in her corner per the orders of Theodore Long, went one-on-one with Tamina, with Rosa Mendes in her corner. In the end, it was Alicia Fox hitting a somersault leg drop on Tamina en route to picking up the win.

After attacking Sin Cara last week, the new team of Hunico & Epico, with Epico’s cousin Primo in their corner, faced Jimmy & Jey Uso in tag team action. In the end and with some help from Primo, Hunico & Epico would pick up the win after Hunico hits a senton bomb on one of the Usos. After the match, Hunico & Epico talked trash to the other Uso, allowing Primo to attack from behind. This trio then beat down Jimmy & Jey Uso, sending one from the ring before Epico hits a double knee facebuster on the other, followed by the Back Stabber by Primo and a senton bomb by Hunico. Hunico, Epico, & Primo have certainly made an impact on SmackDown, but is there any stopping this new alliance?