One of the most influential characters of his generation, his calculated movements and slow, deep, intellectual interviews have become legendary. But who knew that behind those promos laid a troubled soul with a dark past? This is the story of Jake “The Snake” Roberts, and this DVD looks candidly at the rise and fall of not only his wrestling career, but his real life addictions and problems, amongst all other things. 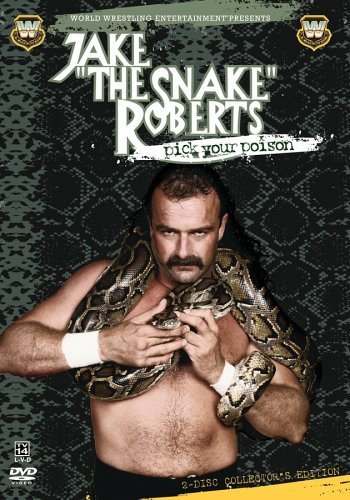 Much like most DVDs of this nature, Jake sits down and discusses his childhood, noting how he was moved from family to family, making new friends and watching the horrors that unfolded around him. Brutally honest about everything, Jake talks in the demented yet captivating tone of voice that made him a star in the late 80s.

With the help of numerous family pictures and archive footage, we are given an insight into Jakes world as he discusses all topics thrown his way. From the origins of the DDT (and how he concussed Ricky Steamboat) to the infamous Snake Pit with Honky Tonk Man, to his appearance in WCW to feud with Sting in the Coal Miners Glove match (sadly, there is no in-depth look at Cheatum the midget from the Spin The Wheel make A Deal segments), and his return to the WWF.

It’s shocking to hear some of the things that Jake says, but it is no surprise to anyone who knows anything about the last ten years of his life. As deep a statement as it is, telling the world that he wished he was the one to die instead of the likes of Curt Hennig falls short of shocking us. In fact, from my own perspective, I’m shocked that Jake is still amongst us, but divine intervention is a quantity that cannot be questioned in this instance.

Don’t be fooled into thinking that this is a negative review, though. In fact, far from it. The anecdotes from his peers and Roberts are at times priceless, and do not stray from anything that has previously been said about the subjects (important, because guys like Hulk Hogan and Shawn Michaels are notorious for changing their lies to suit themselves on a near daily basis). Furthermore, there is plenty of coverage concerning feuds with Rick Rude, Steve Austin (yes, the whole 3:16 introduction is explained here) and Jerry Lawler (which cut Jake pretty deeply).

The DVD extras are definitely worth watching also. Whilst some excellent matches are missed out, there are plenty of classic interviews and segments to enjoy (particularly with the Ultimate Warrior – as weird and out of this world as they may seem, they are gripping to watch), and the matches that are included aren’t offensive to anyone either.

On the whole, another solid DVD offering from the WWE. For whatever reason, I feel a little empty from watching it, just because there could have been so much more covered. As it is though, it’s well worth the purchase just to see the negatives of a business like professional wrestling. When times are good, they’re great. When times are bad… well, buy the DVD and see for yourself.