The Matrix “franchise” is an odd one in genre cinema. Before the release of Resurrections, the franchise consisted of a trilogy of movies, only the first of which is considered a classic film. The 1999 movie “The Matrix” was the kind of film that science-fiction needed at that time. The sci-fi genre on film is defined by a handful of movies that caused a massive leap forward, followed by a litany of copycats that turned everything stale and tired before another new kind of movie came along to jump things forward once again. It’s hardly some great insight to point out that The Matrix was released the same year as the first Star Wars prequel film, The Phantom Menace; the comparisons and contrasts between the two movies drove conversations for the whole summer. The consensus at the time was that Star Wars was tired and out of touch while The Matrix was modern and fresh. Of the two, The Matrix was the movie to give sci-fi its next leap forward in what movies of the genre should look and feel like, much the way the original Star Wars movie had done in 1977.

Though both The Phantom Menace and The Matrix premiered in 1999, their respective sequels came out a year apart. Star Wars had its second chance to right the wrongs of the 1999 prequel, but 2002’s Attack of the Clones only doubled down on what went wrong with the first film. As it stumbled, the hype grew for the Matrix sequel, due out for the summer of 2003. Fans eagerly awaited the movie, Matrix Reloaded, expecting something akin to The Empire Strikes Back. Instead what they got was a mess of a movie, occasionally visually mind-blowing, but mostly filled with half-baked ideas, long-winded exposition, and questions that not only weren’t answered but which seemed unable to be answered. It wasn’t a bad film, per se, just a sloppy one, and time has not been kind to it. A third film was released just six months later in November of 2003, but instead of bringing everything to a satisfying conclusion, the story ended with more questions left unanswered, replaced by pseudo-philosophy and mysticism. It at least had the feel of a “the end” to it. It was open-ended, but in a way that implied a never-ending cycle of more of the same. Based on the diminishing reception to the films, no one was really clamoring for more. The franchise ended there and, for the next seventeen years, it was a trilogy regarded as one great movie, one misfire, and one dud.

By the time a fourth film was announced, enough time had passed that the cultural impact of the 1999 movie had completely absorbed into a litany of copycat films, and little of the sequels was remembered fondly. The “franchise,” as it were, was simply not culturally important enough for there to be a great demand for a fourth movie, especially since it would be a sequel to a film that was regarded as the worst of the three.

And yet, here we are: Matrix Resurrections is released in theaters and HBOMax, promising to take us back into the world we first encountered in 1999. It fulfills that small promise at least, though it does so while also being a movie that, on its own merits, fails to inspire the way the first one did, fails to wow the way the second one did, and fails to justify erasing the implied “the end” the third one had. 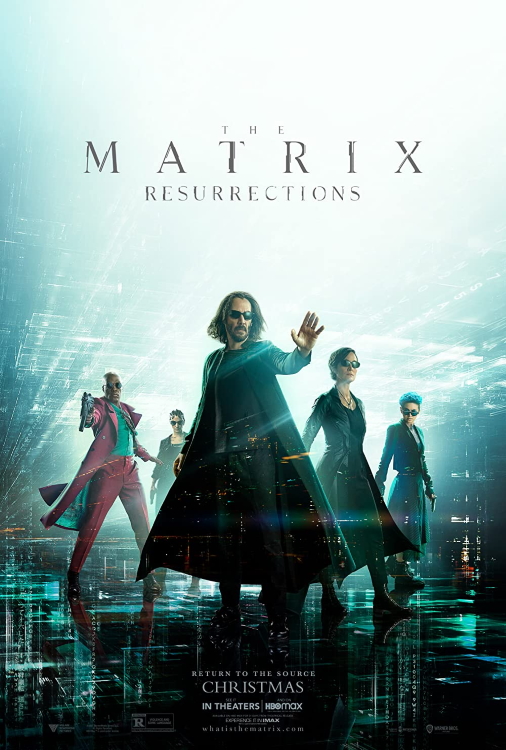 There are a few big problems with Matrix Resurrections, though at least one of them was unavoidable: The leather and trenchcoat look that defined the first movie is back, as it must be, but it returns in an era where such things are out of fashion. It could be worse: Had this movie come out ten years ago, the look would have been regarded as embarrassingly dated and cheesy. Enough time has passed now for it almost to come off as retro and vintage. I don’t know if that’s the intention, however; the movie takes itself way too seriously, so I doubt it.

In terms of its story, I like the broad strokes of the idea: Neo is back in the Matrix, now working as Thomas Anderson, a famous game developer whose hit title, eh hem “The Matrix,” is basically a retelling of the first film. Developing the game caused him to wonder if his world is real or an illusion and he suffered multiple psychotic breaks, during which he believed he really was “Neo,” and that the story of the game was based on his real past. Eventually, he is broken out and learns the truth… and that’s the summary of act one (though it’s an hour of the 2.5-hour movie). What follows is a movie that has no idea where to go with that fine-enough premise. It’s a good way to get us back into the Matrix but that’s all it is. As we move into act two it quickly becomes apparent that there is no substance to the movie. There’s no driving plot until the very end, there are no stakes, no sense of urgency, no reason for all the action scenes that occur. 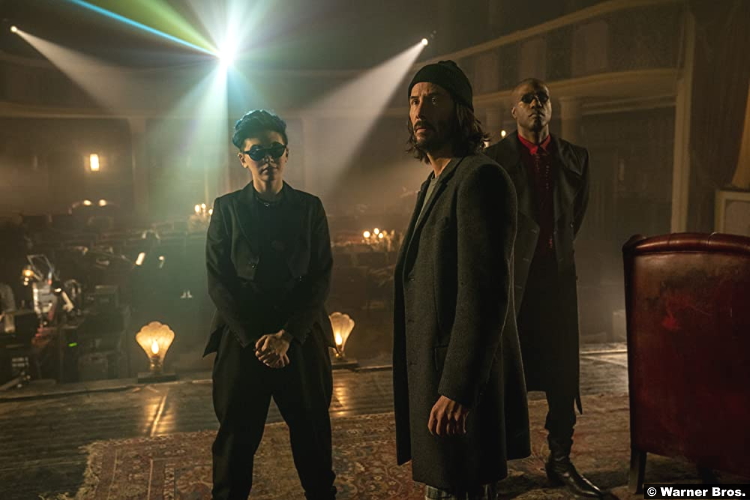 True to the Wachowski style, the action scenes are a delight to behold. Occasionally I would find myself writing a note only to realize I needed to rewind just to watch the spectacle with my full attention. The special effects have obviously improved leaps and bounds from the days of the first trilogy (whose digital character models often looked like video game characters) but it’s the choreography, blocking, and pacing that carries the day when the action gets frenetic. The only time the movie feels alive is when the punching and shooting is happening; goodness knows the movie drops dead whenever people have to talk and explain things.

The biggest problem with Resurrections is that the film felt less like a sequel and a continuation of the world of the first three movies, and more of a fan-fic that substituted a new plot and purpose (or even the answering of some lingering questions from the first movies) for way too much meta-commentary/self-congratulatory praise for the first movie, and the same traps that doomed the Star Wars prequels: The world is shrunk so that everyone who could be back was brought back, and almost everyone else is related to someone who couldn’t be back. 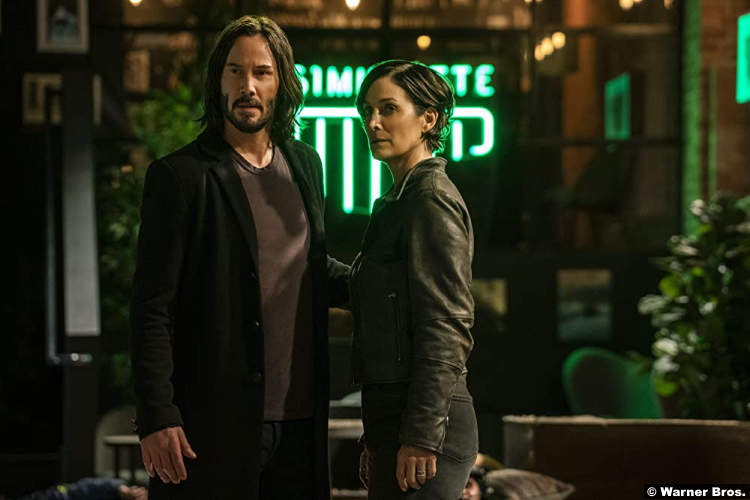 The film lacks depth, lacks purpose, and lacks a goal until the third act is well underway, and even then the story is a half-baked “save Trinity!” plot with a handful of very rushed scenes that could have been a solid idea if developed from the start of the movie. As with the first act, I liked the idea of act three: The notion that Neo and Trinity as a pairing are the literal personification of a “power couple” that basically maintains the batteries of the machines. Where it failed was in doing anything with the idea beyond a rushed “rescue” sequence twenty minutes before the credits rolled.

A movie is defined by its second act and, unfortunately, The Matrix Resurrections completely squanders its middle.

6/10 – Resurrections is not a bad movie like the third film was; it is simply an aggressively mediocre movie that did not know what to do with the handful of good ideas it had to work with. 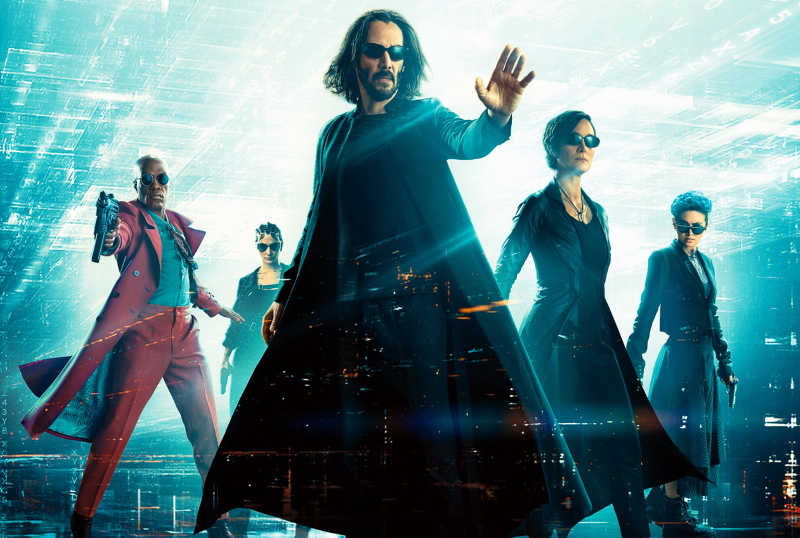