In January we started the series with Robocop, one of the most unique sci-fi action films of its day. After that, we shifted gears to the romantic fantasy-comedy (and just about every other genre) classic, The Princess Bride. We looked at 007’s fresh start with Timothy Dalton’s first crack at the icon in The Living Daylights. After that, we looked at Kubrick’s war masterpiece, Full Metal Jacket. Most recently, we looked at the delightful-but-bizarre Three Men and a Baby, a family comedy movie that spends a considerable amount of time focusing on drugs/crime. On the other hand, Lethal Weapon offered up a crime story garnished with humor and an unpredictable atmosphere.

Now we come to the final handful of movies on our list and even though it’s still weeks away, my mind is on Halloween and the scary movies that come with it, which means my mind is on this underrated film from 1987… 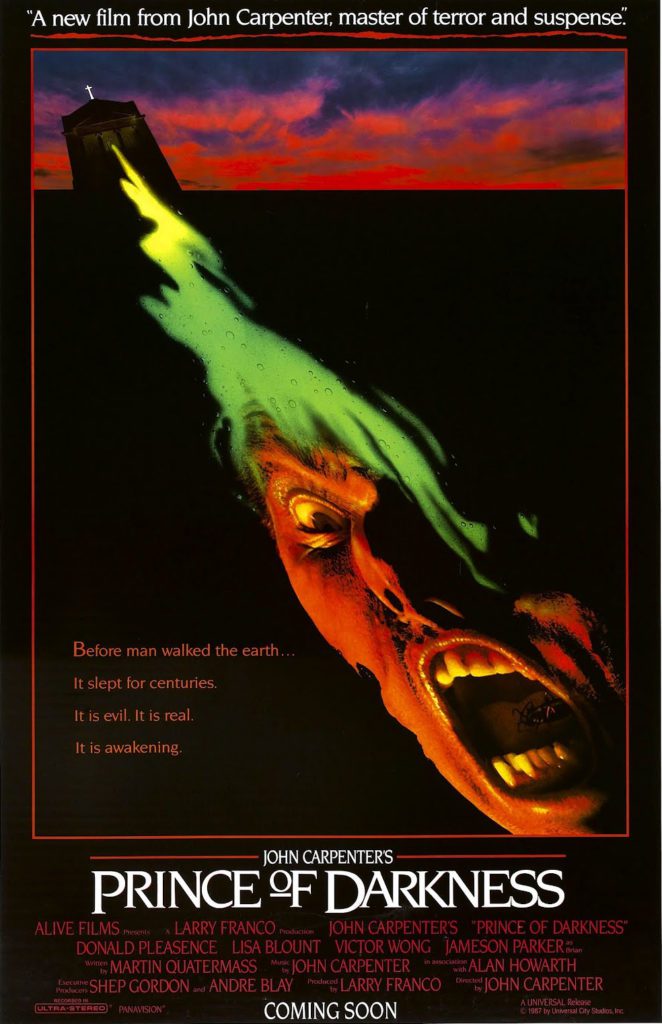 Alright, I’m not going to lie: Calling this movie “awesome” is stretching it a bit. Prince of Darkness is far from John Carpenter’s best work, but its flaws almost give it a charming quality, as do the director’s odd choices made throughout the film.

In a lot of ways, the movie is structured like Halloween, but that’s both to its benefit and detriment. Like Halloween, the movie features a long first act, filled with steadily escalating tension, accompanied by a relentless score (by John Carpenter himself). This creates a feeling of foreboding that starts chilling, then becomes almost frustrating as you just want whatever’s going to happen to hurry up and happen already, and then it circles back around to being almost maddening, as it takes the viewer well beyond the average time one should wait in a horror movie for the actual “horror” to arrive. By the time the mid-second act killing starts happening, you’re almost relieved, but you can’t be because the music and the editing become quicker-paced, keeping you glued to the screen, waiting with dread to see who is going to get it next. It’s not till the third act hits that the movie goes to full-blown insane levels of murder, shouting, running; you know, all the tropes.

This is what separates Carpenter from most other horror writers/directors: He doesn’t burn the audience out with jump scares and random killings in the first half of the movie. Instead, he keeps things bloodless and shock-less for the first forty minutes. It’s only then that the weird green goop at the center of the plot sprays its evil liquid (?) into the mouth of Susan (radiologist, glasses). Even then, it’s another twenty minutes until the non-stop craziness happens. That leaves only half an hour of horror in this horror film. Everything before that is just a slow, bubbling up of tension, dread, frustration, and madness. 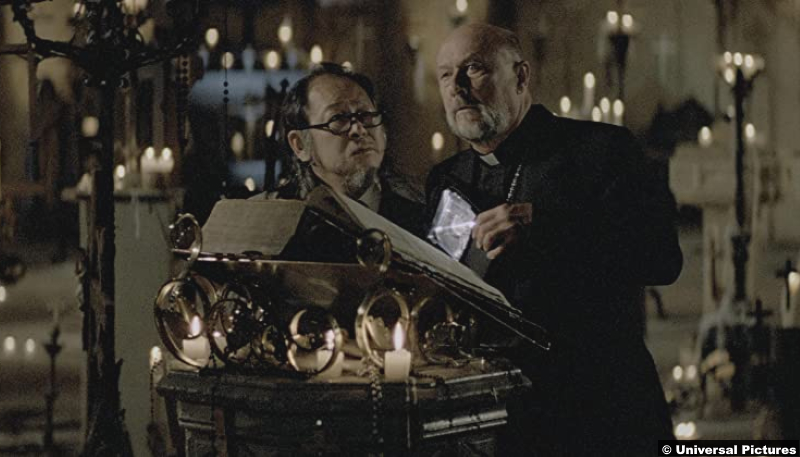 The other thing that separates him is how he tells his stories or, in this case, doesn’t tell them. There is a lot of lore to this story but, in classic Carpenter fashion, the bulk of it is left on the cutting room floor. We’re given only a handful of brief exposition scenes, detailing everything from an order of priests called to defend a great Catholic conspiracy, a revelation that evil itself is not just an idea but is a physical manifestation (with telekinetic and body possession powers), a convergence of science and religion as both try to wrestle in their own ways with an apocalyptic danger, and time-warping dreams sent from people in the future to warn humanity of the coming resurrection of this evil-incarnate manifestation. Any one of these ideas could be the basis for a horror movie, but John Carpenter tosses them all into a blender, gives each only as much attention as is necessary to further the story, and then moves on.

In his own words “it was all a bunch of mumbo jumbo anyway.”

The structure of the movie is akin to Halloween, but the movie that my mind kept going back to as I rewatched the film was Romero’s Night of the Living Dead, and it must have been intentional. There are too many shots of the hordes of “soulless worshipers of the anti-God” lingering in alleys, street-sides, and so forth not to have been at least an homage. They provided the only creepy moments for most of the film’s runtime (complete with Alice Cooper leading the pack, because why not). 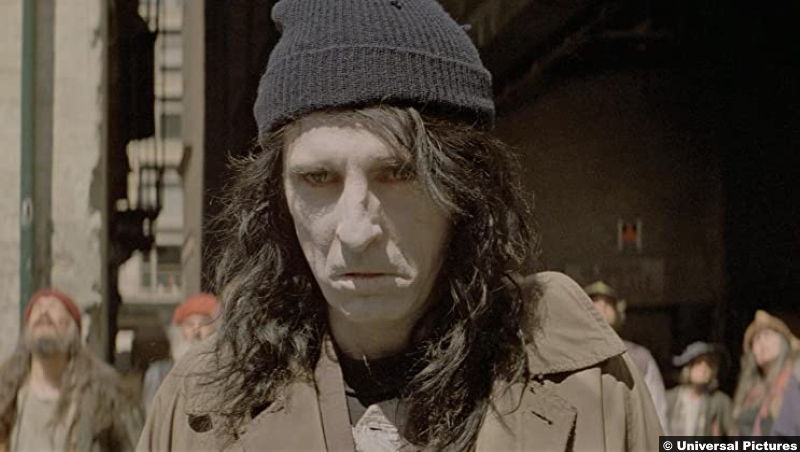 Ultimately, I don’t think anyone’s going to look at a lineup of John Carpenter movies and say “ooh, I really want to see Prince of Darkness again,” and yet, the movie has a charm that can’t be denied. It’s so earnest, so moody, and so full of unexplored lore that it makes you want to revisit it every few years, in the fool’s hope that you might learn a bit more. Does the ending mean the “anti-God being” wasn’t vanquished for good? Is mustache guy the next one to get possessed and usher in the apocalypse? If you asked John Carpenter those questions he’d just shrug and tell you “who cares? It’s just a horror movie.”

And he wouldn’t be wrong. Prince of Darkness isn’t much, but for what it is it’s a fun time, packed with some eerie moments, an unyielding sense of escalating tension, and a third act full of fun gore and interesting lore. The movie isn’t perfect, but in my biased, forgiving eyes, it’s awesome, even thirty-five years later.