It occurs to me that perhaps it was an unfortunate choice to cast Reba. Unfortunate for me, I mean. She’s great. In fact, she’s always been great, which is why it’s hard for me to see her as a villain.

And I don’t mean that like it’s difficult for me to see her play bad. I mean that I like her so much that when she does bad things, I’m like, “Maybe she has a point.” I’m kidding, of course. (Or am I?) But yes, she definitely shouldn’t have let missing Mark die. However, her motivation–protecting her son–is almost understandable. Almost. 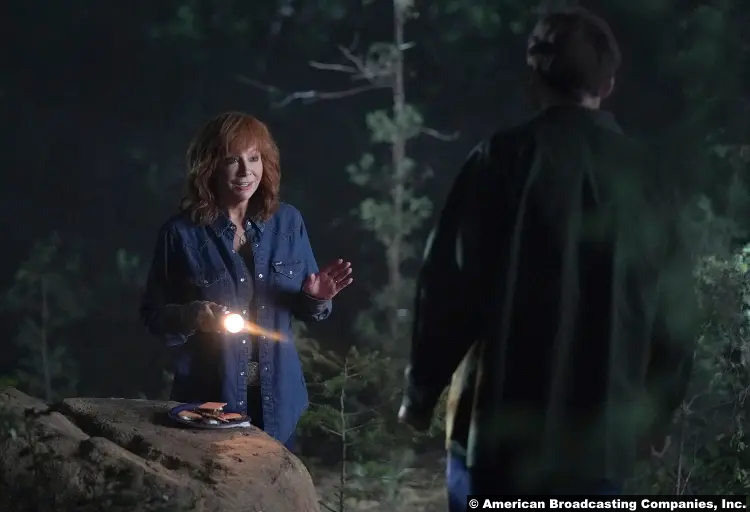 Because the thing is, as far as we saw, Walt didn’t actually harm Mark. This is like one of those plots where if people just talked to each other, then it would prevent a lot of complications, at the very least. At the same time, though, I’m not sure Sunny would believe her son even if he told her explicitly that he didn’t hurt the backpacker. There’s still so little we know about their relationship and their history that it’s hard to decide at this point.

And there are also so many other suspicious people around Sunny’s establishment. Last week, for instance, Paige and Luke just seemed like your typical bickering couple. This week, we find out that they’re a bit more than that. They’re probably criminals, actually, since they’re, in their own words, hiding out until they can retrieve some mysterious money. They are still a bickering couple, though, and one that immediately disappears into the woods.

This provokes two interesting developments. First of all, stepdad Avery seems awfully interested slash suspicious right away. He even sneaks into the couple’s glamping tent to snoop around. Along with a journal, he finds a gun, which is certainly unusual. Not necessarily in these parts, of course, but with this couple? Oh, yeah.

Anyway, the search that Emily practically forces Sunny into organizing doesn’t turn up the couple by episode’s end. Well, Emily does find Luke washing blood off his hands, so there’s that. That’s our cliffhanger until next week, so we’ll have to wait to see if there’s a reasonable explanation for it. 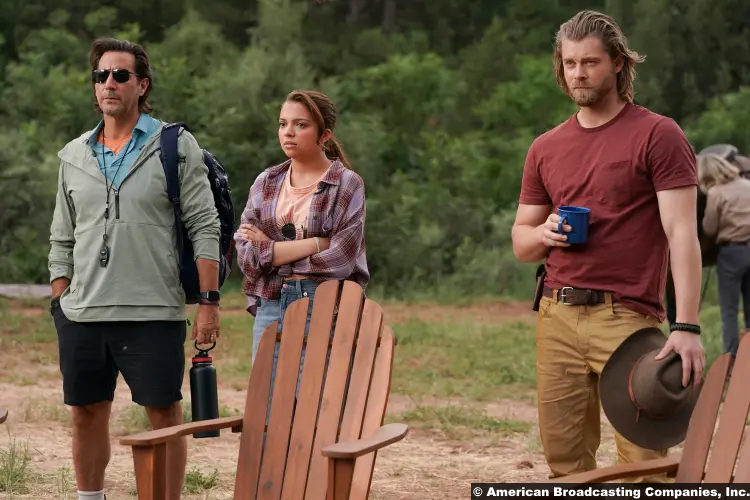 Meanwhile, other hikers tell Cassie that Mark had planned to check out the Deadman’s Drop trail. It’s technically closed, but that apparently doesn’t dissuade anyone and everyone from going out there. Cassie and Beau check it out, finding a water bottle Cassie later ties to Mark. They know for sure that he (or his water bottle) was definitely on the trail.

And while last week, Denise mentioned a young woman who disappeared years ago, she reveals this week that they found her body around Deadman’s Drop. That was like, twenty years ago. Has Sunny been hiding her son that long? I mean, I guess, since Walt is obviously older than that, but it just seems tricky. How do you hide a whole person for like, 40 years? I say that, of course, because it doesn’t appear as if Buck or Cormac know about him. Or at least, they don’t know about Sunny’s visits with him.

Finally, we come to Jenny’s storyline. As I said last week, I wouldn’t mind if the show gave Jenny new plots every week, while we still had the overarching seasonal plot. (Seasonal, like pumpkin spice.) It looks like that’s exactly what they’re going to do because Jenny gets her case of the week. It’s Tonya, in fact, who’s complaining that someone is squatting in one of her properties.

I don’t know why she went to the police, because when they drop by, they find Donno there, tussling with the squatter. The squatter, Jef with one F (Richard Jin), is cagey and has about a million IDs in different names, so they haul him and Donno to lockup. Some rando gets brought in as well, and immediately tries to poison Jef. That leads to a whole plot about how Jef is a whistleblower. He worked for an aircraft manufacturer, but they’ve been faking their safety tests. 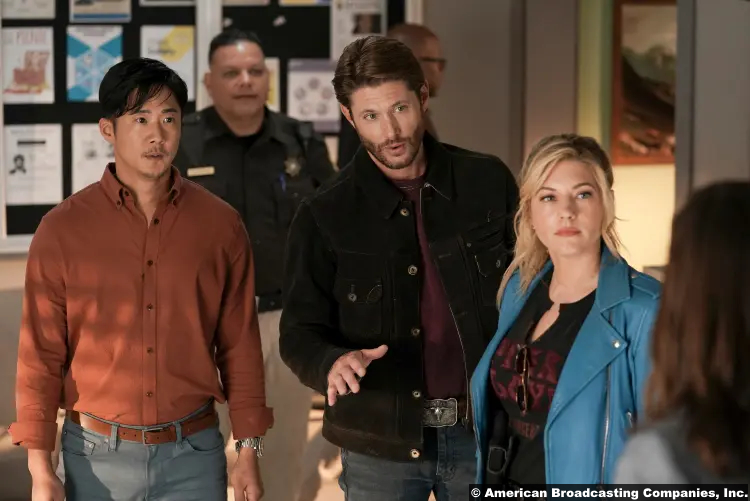 They really don’t want that info to get out, hence the murder attempt. Then a US Marshal comes to pick up Jef, to transfer him to witness protection, but she turns out to be dirty. Luckily, they had Poppernak following her and Jef, so they’re able to save both him and the other witness he’s been hiding.

Mostly, though, I bring all this up just so I can talk about the scuffle in the jail cell. Donno is never one to shy away from a fight, obviously, but he really goes for it here. He has no idea who Jef or the rando trying to poison him is, but he clearly senses something is untoward. So in an effort to unsettle the rando, he rips his shirt and roars like a bear. It’s incredible, to be quite honest. And also calling his fight with Jef a “citizen’s arrest”? He’s really vying with Riverdale‘s Dr. Curdle, Jr. for My Favorite Weirdo™.

8/10 – Obviously, not a lot happened this week, as this episode is still more plot-building for this season. Still, though, I am enjoying that they’re keeping the plot fresh with a case of the week. I also find the main plot very intriguing. As I said, there’s still so little we know. That creates a lot of possibilities, as there are so many places this story could go. Bring it on, plot twists!