Well, we’ve had a good run so far. This week, however, finds us with an episode that has a lot of ideas–A LOT–and subsequently, spends more time chasing them than seeing them through. This is a very ambitious episode, though, I’ll give them that. It’s also, by far, the grossest of this anthology series to date.

I’m having a little trouble beginning this because, as I said, there is a lot involved here. So, uh, let’s just start with smallpox. I’m not going to give you a detailed history of it, but I will say that if you didn’t know, then what you need to know is that it was devastating in the Americas. Mostly, it was devastating to Native Americans. In fact, it’s estimated that along with measles and the flu, smallpox took out 90% of the Indigenous population. NINETY PERCENT.

Natives were particularly vulnerable, of course, because they’d never had any exposure to this kind of thing. That doesn’t mean, though, that it didn’t also have terrible effects on dirty-ass colonists. (I’m using that phrase literally.) You can see, for instance, in the miniseries John Adams that one of the many challenges during the American Revolution was that a smallpox epidemic was ripping through the colonies.

In that miniseries, they depict the process of inoculation, a precursor to vaccination. To put it scientifically, it’s gross as heck. They would take a sample of infection and then inject it under a healthy person’s skin. (This is as delicately as I can put it.) But it took some time and observation to get to this point. It was after people noticed that when people got smallpox and survived, then they rarely got it again. If they did catch it again, then it was a much milder infection.

In this week’s episode, set in 1750s New England, they obviously haven’t gotten to that point yet. They’re still at the “Oh, God, what is this? Is it ghosts? Are there ghosts in my blood?!” phase. (See also: March 2020.) Since they don’t know what causes it, a disturbing number of people are willing to buy into all kinds of bananas cures. (See also: April 2020 to present.)

Take, for instance, Celeste (Julia Schlaepfer), a (the?) sex worker in the community. She’s had a raging case of the smallpox for a while now. However, she’s noticed that her clientele never seems to contract it, even when they’re, uh, up close and personal with her outbreak. (Look, like I said, this is BY FAR the grossest episode of this series, so I’m going to be very down with the euphemisms.)

Her occupation and her belief that this is a divine gift, similar to the one given to Lazarus, puts her at odds with Pastor Walter (Seth Gabel). I’m not sure why he’s so hesitant to believe, especially considering how quickly he gets on board with widower Thomas’s (Cody Fern) suggestion. You see, Thomas has heard that in a nearby village, they’ve solved the mystery of smallpox. You gotta eat the afflicted’s heart after they die. You know…science.

We’re about 60 years past the Salem Witch Trials at this point, but some scientific beliefs are still just as silly as they were then. However, while Walter and Thomas get into heart-eatin’, an idea which they’ll later spread to others in the community, not everyone is as ill-informed. Milkmaid Delilah (Addison Timlin), in fact, is just as devout as any good church-goer, but her religion is science. Through her encounter with Celeste, which blossoms into a relationship, she ends up figuring out how to prevent smallpox.

Like Delilah, Celeste used to be a milkmaid. Contracting cowpox was a hazard of the job. People caught on, though, to the fact that milkmaids who’d had cowpox didn’t catch it again. They also rarely got smallpox, and if they did, then it wasn’t nearly as awful as it usually was. In 1796, Edward Jenner tested this idea over and over, finally publishing a paper with the results. Science credits him as the father of the vaccine, but other people, like Dorset’s Benjamin Jesty, had successfully tested out this idea before, inoculating his wife and sons. 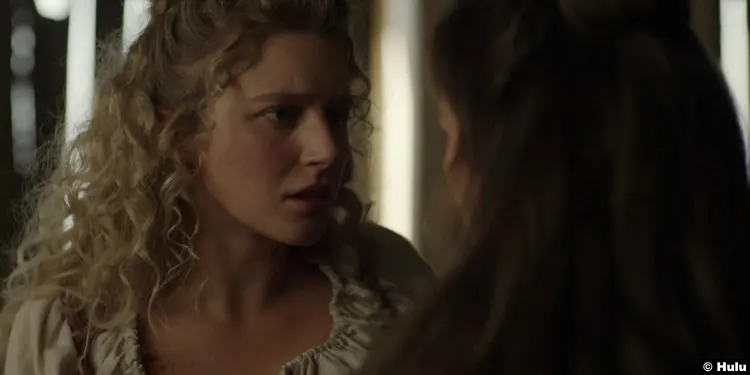 When people found out what Jesty did, they were not very chill about it. They would heckle him in the street, in other words. I imagine both Celeste and Delilah would prefer mocking, though, over their ultimate fates. They’re just two pretty powerless women, who are trying to contradict the ideas that a powerful zealot is determined to spread. That’s tough in the 18th century, to say the least, and it still hasn’t changed much. Once that kind of poison gets in your system, there’s hardly ever a clean recovery.

6/10 – This episode has parallels with a lot of modern things. Just off the top of my head, there’s the obvious: the pandemic elephant in the room. Then there’s bugchasing (purposely trying to catch a disease), religious hypocrisy, political cults of personality, women have thoughts? and so on. As I said, it is so much, and I just don’t think all these themes came together in the end. There is an interesting premise here, but it just kind of fizzles out by its predictable conclusion. In addition, I found much of the character development confounding, particularly with Thomas and also Delilah. And she, along with much of the dialogue, was jarringly too modern. Is she a time traveler?

Fun fact: Seth Gabel also played Cotton Mather on Salem. The real Cotton Mather was a proponent of inoculation, which in an Uno reverse of what we might expect him today, put him and other religious leaders at odds with local doctors. Also, in other fun facts, the word vaccine comes from the Latin word for cow. Because of the pox.