Pixar’s track record before the release of Brave was almost perfect. In fact, the studio had developed a “can’t miss” reputation, being able to churn out hit after hit both commercially and critically. The only movie during this magical run to put even a dent in their armor was Cars, and most were willing to accept that as a well-intentioned John Lasseter passion project that still managed to make a nice chunk of change at the box office. The sequel—Cars 2—was not afforded such a benefit of the doubt. The film, which came out a year before Brave, made money, but it was easily the biggest critical bomb Pixar had ever released.

Keep in mind, Disney bought Pixar in 2006, so a lot of the movies that came out in the immediate years that followed were in early development. It was around the time of Cars 2 that the first post-Disney influence could be felt, and the utter failure of that movie (apart from the large but shallow pool of popularity with the eight-and-under crowd) was seen as a clear red flag that the brand was no longer the uber-reliable developers of modern classics that it once was.

I suspect, as a result, the first reactions to Brave—which were largely mixed-to-negative—were a form of self-fulfilling prophecy. 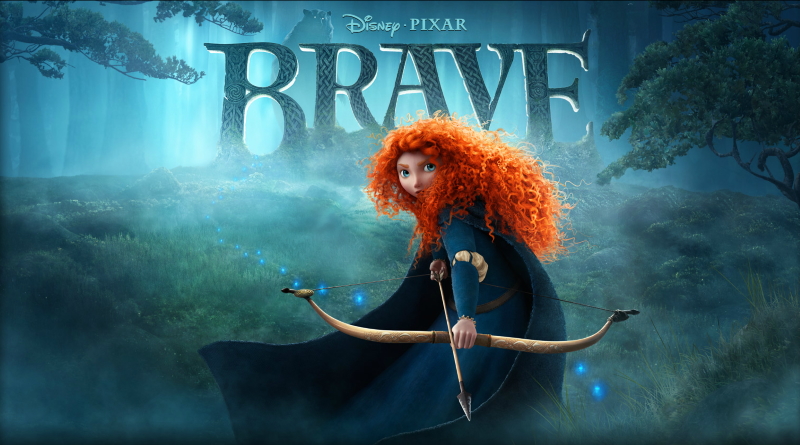 Brave was not a typical Pixar movie. It can hardly be called a “safe” Pixar movie, due to how many of the already-established conventions of the brand were shaken up. Likewise, the things that set Brave apart seemed, on the surface, to be moves designed to make it more “Disney”-like. To appreciate the problem there, you have to take your mind back to this era of movies: Disney had just released Tangled to great success, and Wreck-it-Ralph was on the horizon, but it wouldn’t be until Frozen released in 2013 that moviegoers realized “Disney Animated Movies” were well and truly back. In 2012 there was still a stigma hanging over the company that had existed since, unfortunately, 2002’s underrated Treasure Planet.

A Pixar movie, post-Disney buyout, releasing as a princess-driven fantasy, so soon after the obvious Happy Meal cash-grab Cars 2 was met with suspicion from the outset and many were unwilling to give the movie the fair chance it deserved upon release. It ended up being only the third-highest-grossing animated film of the year, falling behind the fourth Ice Age film and the third Madagascar movie, both of which were regarded as lightweight franchises that shouldn’t be able to compare with a Pixar mega release.

The fact that Pixar movies had switched to being annual releases (post-Disney buyout) might have contributed to a diminished feeling of “specialness” to each new film.

In all, Brave was the first Pixar movie since A Bug’s Life to release with the least fanfare and the smallest impact on the cultural zeitgeist. Monster’s University came out the next summer with a big marketing push, Inside Out released after that to huge acclaim, and though is even more overlooked than Brave, it’s with good reason (The Good Dinosaur is the weakest non-Cars movie Pixar has released), hot on its heels was Finding Dory, a “better than expected” Cars 3, and the massive hit Coco. All of these movies scored big in theaters and on home video and were heavily marketed alongside the launch of Disney+.

Not marketed, however, is Brave. The film has remained almost a forgotten gem, akin to Disney’s Fantasia…but even Fantasia has the iconic image of Mickey wearing the Sorcerer’s hat all over its marketing. When was the last time you saw any promotional material featuring the princess from Brave?

Does anyone even remember her name? 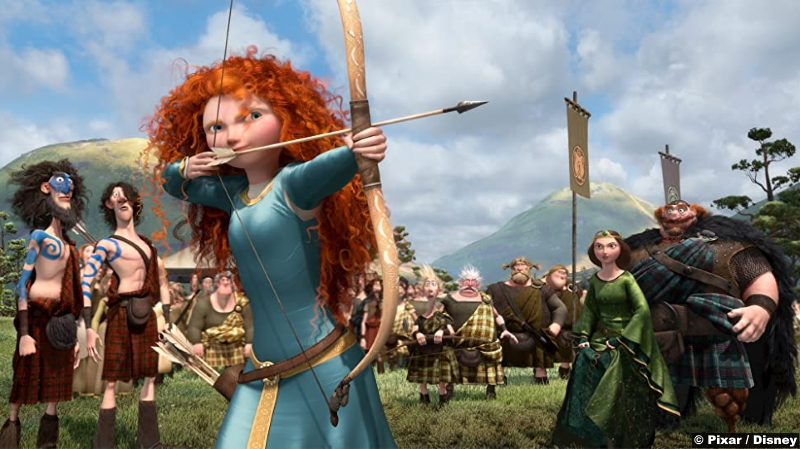 Brave tells the story of Princess Merida of Scotland. On her sixteenth birthday, she is gifted a bow and arrow by her father, much to the disapproval of her mother. The film centers largely around the mother/daughter dynamic, especially after the fantastical turning point of the movie, when her mother is transformed into a bear. The plot kicks into gear here, with Merida desperate to undo the spell before her mother, Queen Elinor’s transformation is made permanent. At first, Elinor still possesses her human consciousness while inside the body of the bear, but with each passing hour, a little bit of her true self disappears. If the spell is not undone soon, she will become a bear entirely, and will surely have to be killed by the very bow Merida was gifted on her fateful birthday. 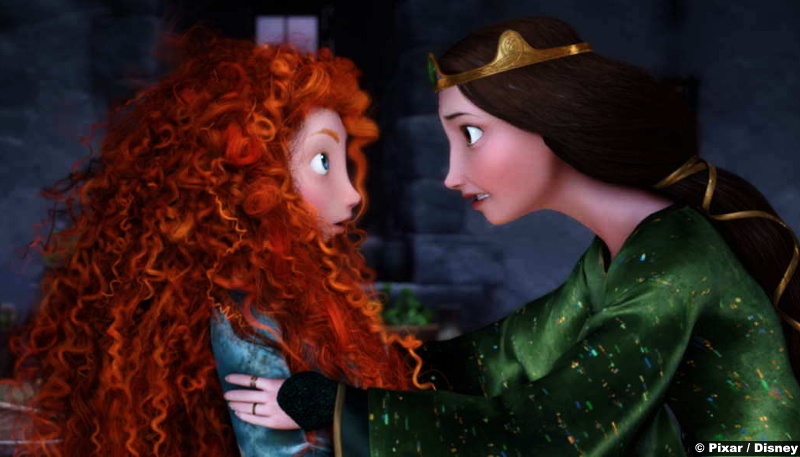 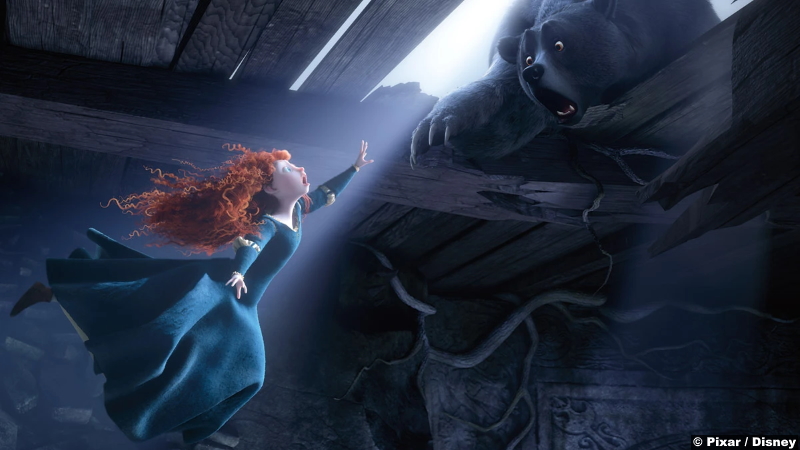 This is classic fairy tale storytelling. Pixar’s animators were in top form as they brought the world of medieval Scotland to life. Merida’s hair is the real technical achievement and was the big “test” the studio wanted to overcome (just as “fur” was in Monster’s Inc, or “realistic water” in Finding Nemo). The movie deftly balances its fantastical elements with a simple, relatable drama between mother and daughter, and the mother’s transformation into a bear is one of those bizarre ideas that seem out of left field (and was a common point of contention in negative reviews) but is perfectly at home with classic fairy tale storytelling. The moral in the center and the resolution of the dilemma (especially the head-fake not-solution regarding the tapestry) is quintessential Pixar, and is almost a storytelling trope the studio relies on too much in recent movies (namely the delightful Encanto and the misfire Turning Red). 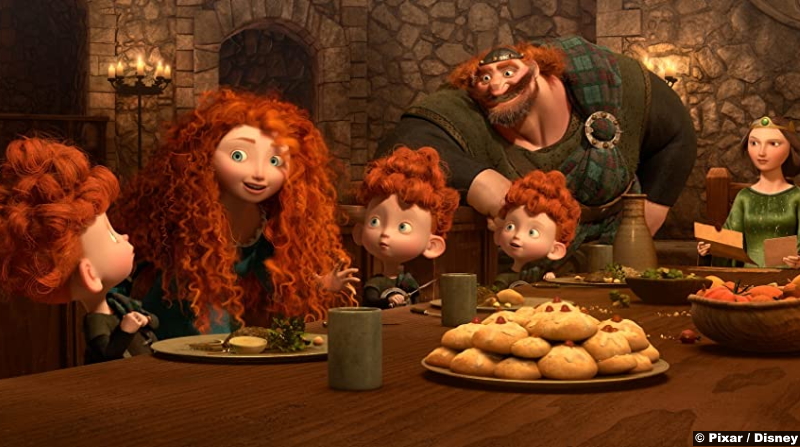 On paper, Brave is a movie that has everything working in its favor. It was only a combination of outside factors that seemingly doomed the movie to an “alright” box office run and an instant disappearance into home video obscurity. I doubt we will ever get a sequel to the movie. Truth be told, the story has such a sweet and tidy ending already in place, I see no reason even to try a sequel. I do, however, hope Pixar one day returns to the classic medieval fantasy genre, because their sole foray (not counting Onward, which was more of an intentional subversion of the fantasy world) resulted in one of their best, if most underrated, ever.