I don’t know why I spent any time trying to ascribe some kind of lofty motive to Whitover last week. I should have guessed the obvious conclusion–he just wants money. And that is definitely the least shocking reveal in this season finale.

We learn that about Whitover, by the way, in a flashback. He approached James, who also goes by Hoski, at a Native event. By this point, Whitover had already figured out who was behind the earlier Stockton bank robbery. The efficiency of it impressed him, though, so instead of arresting James, he blackmails him into sharing the loot. He does generously supply a more capable helicopter pilot, poor doomed Chip, though. And now I’m wondering if Chip’s death weren’t intentional. 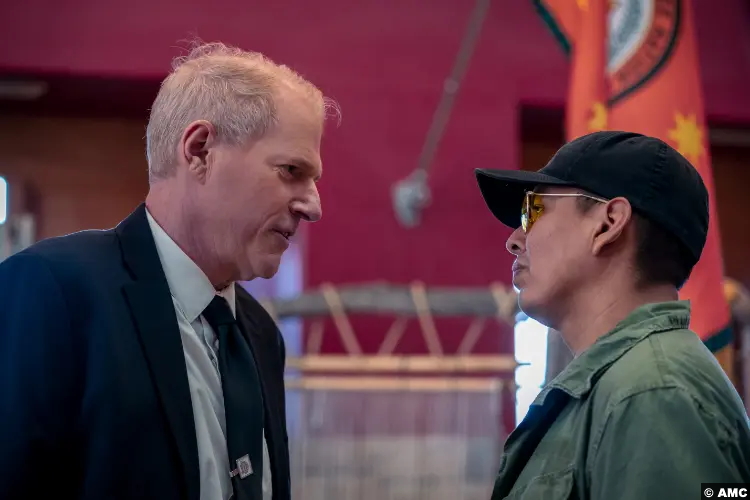 Maybe I’m edging close to conspiracy theory territory, here, but it would ring true with how calculating we find out Whitover is. But before we get to that, let’s get back to where we were last week. He and Bernadette had set off alone. At the same time, Chee returns to the station to find her and Leaphorn gone. Luckily, though, she’s still in radio distance.

This kicks off one of my favorite moments from this episode. Knowing that Whitover is with her, Chee talks to her solely in Diné. He’s able both to warn her and to get her location. So as soon as she stops, she ditches Whitover. This leads to a confrontation between him and Chee,  in which we learn how crafty the senior agent is. Because not only has he orchestrated this scheme to get the money, but he also has laid the groundwork to blame it all on Chee. As such, their confrontation ends in a quick-draw, where Whitover shoots Chee in the arm.

I’m not sure why he doesn’t just kill him, since that would make it a lot easier to blame everything on him. But no matter. Let’s get to the cave! James and Frank are going to use the Mormon family as their escape route. First, Mormon Dad will drive over to Devoted Dan’s and get a fancy new van. Then the family will drive that van past any checkpoints, while Frank and James are hidden in the back. Wait. I just now realized that their names are a reference to one of the most famous bank robbers of all time. Is that intentional? 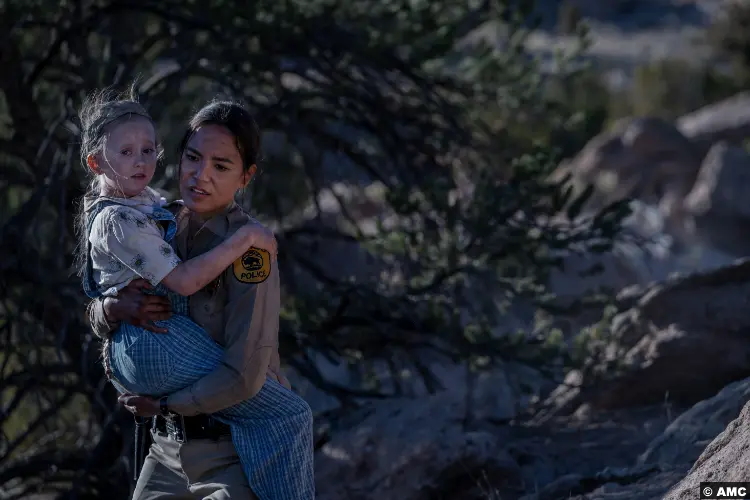 This escape plan immediately goes bad, by the way. Mormon Dad–sorry, Wilson (Julian Bonfiglio)–barely gets away from the cave before he crashes the truck. While Guy is finding him, Bernadette finds the cave and is able to free the rest of the family. Leaphorn had unintentionally distracted James and Frank, which leads to a four-way confrontation between the three of them and Whitover. It culminates in James escaping, while Whitover shoots Frank and Leaphorn. He shoots Leaphorn in the shoulder, but Frank looks like a goner.

Whitover doesn’t get away, though. After leaving the cave, he’s in the middle of daring Chee to arrest him when he refers to Anna in a nasty way. Basically, he’s saying that Chee gave up his impressive career for the murder case, which didn’t even involve victims that mattered. That’s what he’s saying, mind you–not me. Unfortunately for him, Guy is there to hear the part where he insults Anna and he shoots Whitover dead. 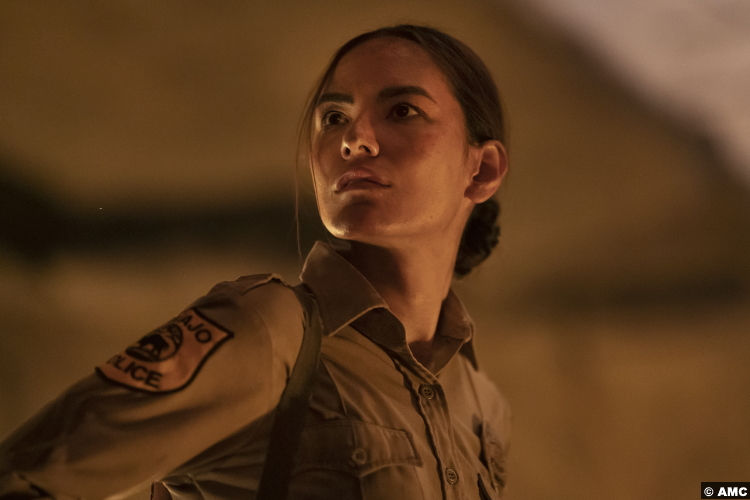 Leaphorn is already in pursuit of James, so that leaves Chee and Manuelito to figure out how to explain all this. Since the Buffalo Society–all two of them–already wired the cave to explode, they just haul Whitover’s body in there. The story will be that he and Frank shot each other and then dot dot dot, the cave exploded. The only problem is, of course, that Leaphorn knows the truth.

Meanwhile, he finally corners James in one of my other favorite scenes of the episode. It’s a credit to the writing and to Jeremiah Bitsui that they actually make me empathize with James. As he recounts his childhood in the hell of Indian boarding schools, you can’t help but feel for him. Then he reminds us that he impregnated a teenager and that he killed his own grandfather and that feeling passes. Leaphorn, incidentally, is trying to argue that he has to let his anger go. There are ways to fight for and work for your people without hurting them or other people. 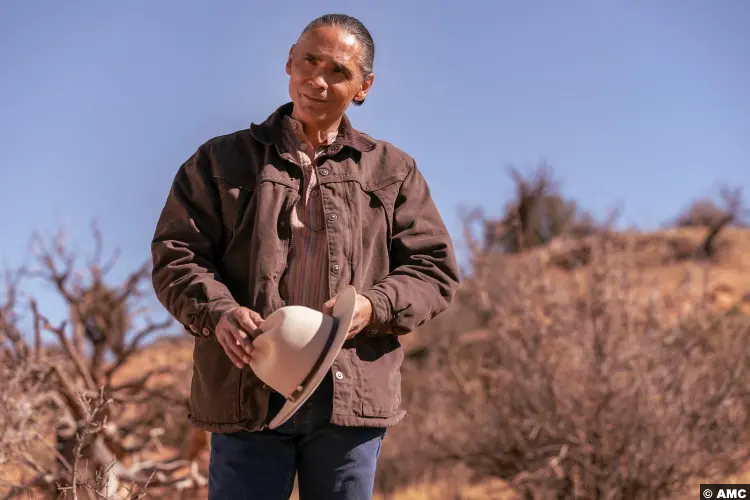 In the end, though, James just can’t do it and he won’t go quietly with Leaphorn. He takes his own life, bringing the story of the Buffalo Society to a sad, ignominious close. Oh, but wait. As Leaphorn later explains, when he’s getting the real story about the cave from Chee, there were some unexpected finds when the FBI pored through it.

For one thing, the money’s gone. And for another, there was only one body in there. Frank Nakai is in the wind, presumably with a healthy payday. To find out if he comes back into the story or if we ever find out what happened to Pete, the other guy in this criminal conspiracy, we’ll have to wait for next season.

9/10 – Some of it is wrapped up a little too neatly for my taste, like Guy’s just happening to be there and just happening to hear Whitover disrespecting Anna’s name, but I can live with that when the conclusion is as satisfying as this was. It was a good season finale for a great season of television.

And it’s also another example of why Zahn McClarnon should be a household name. He’s not the only standout, of course–from big roles to small, this cast was/is fantastic. I also want to say that the show is not just good because it’s about Indigenous–in this case, Navajo–stuff. It was a well-crafted season of television in general, and the Native stuff was just the cherry on top.

Finally, on that note, the inclusion of “This Land Is Your Land” over the ending credits was perfection. No shade to Woody Guthrie–I did almost win an episode of Jeopardy! because of him–but that song just means something different to Native Americans. A lot of things do, which this show understands.