In the wake of last week’s revelation that Percival’s grand plan is apparently, uh, the apocalypse, the residents of Riverdale are understandably concerned. The good people in town, which, of course, includes the main characters, decide to hold an emergency meeting at Pop’s to discuss their next moves.

And I guess they just don’t notice that Alice is like, right there? Or maybe they do know she’s in the house. But for some reason, Betty hasn’t confronted her. It’s the same with Archie and Uncle Frank. You’d think that at some point, prior to now, Betty and Archie would be like, “Uh, why are you aligning with this guy who’s actively trying to destroy me, my friends, and the entire town?” 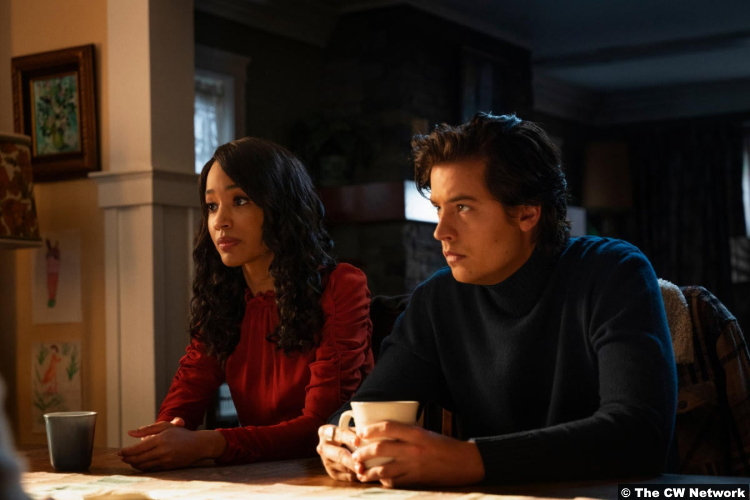 However, they just haven’t asked. I would question it further, but as I always say to myself, forget it, it’s Riverdaletown. Anyway, having heard the plan, Alice quickly shares it with Percival. Then she takes advantage of the incoming fog to issue a curfew for the town. Apparently, this isn’t any ordinary fog. The way they describe it and the precautions people should take make it sound more like the Great Smog of London. Or this being the now supernaturally-enhanced Riverdale, the movie The Fog.

Regarding the latter, Riverdale’s fog doesn’t roll any ghosts into town, as far as we know. That doesn’t mean that nothing unsettling appears, though. First, for instance, another agent tells Betty that they have another TBK escapee. Of course, Betty wants to speak to her immediately. And then she doesn’t and they just never mention it again?

I don’t know, maybe they did. Maybe I have fog brain. But it seems like we went right from that to Betty going home, where she sees a shadowy figure outside her house. She alerts Archie, but instead of going to investigate, they just have sex, instead. It’s a bit of an odd choice, yes, but I see both sides. Since the boxing match, Archie is worried about another palladium-toting attacker. But at the same time, Archie has never, ever hesitated to rush into anything, including a literal burning building.

Afterward, Betty tells him that she might be pregnant. She went off her birth control when the TBK held her captive and she’s just never gone back. She takes a test and we see them react to the results later, but we don’t know yet. In any case, Archie is pretty serene before the test. Part of the reason why he’s working so hard to save Riverdale is that he wants to raise his children there. And while he doesn’t say this, I think the other part is that it’s their town. 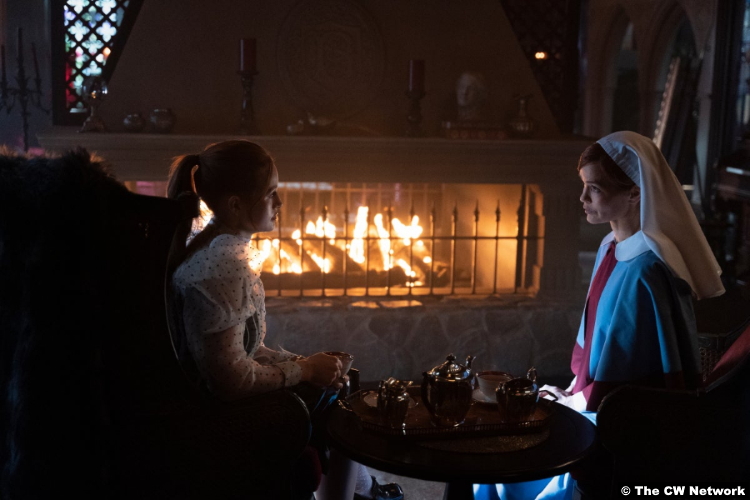 Meanwhile, in other parts of the town, Toni has figured out a way to fight back against Kevin. Yes, she and Fangs are Serpents, which might not be the most ideal environment for a baby. But Kevin has a history of cruising, including in Fox Forest, which has led to at least one unnerving encounter. (Look, I’m pleased that I managed to pull the name “Fox Forest” out of my memory cabinets. Please don’t expect my encyclopedic knowledge of this show’s plots to be absolute, though.)

I don’t love this move from Toni, but I understand it. It ends up being kind of a moot point, though. Moose suddenly shows up, because he’s the new RHS PE teacher. By that point, the fog has gotten too heavy, so Kevin just stays at the school with Moose. He has bad dreams while he’s there, because why wouldn’t he?

Moose, however, is not the only one who comes in with the fog. Penelope is back, having gotten herself to a nunnery. Before she makes the full commitment, though, she wants to make amends with Cheryl. To that end, she gives back the letters that Heather, Cheryl’s first crush, sent her. Well, “gives back” is inaccurate. She never gave them to Cheryl in the first place.

Cheryl is infuriated, in the way that only she can be, especially now that she’s fire-powered. Penelope claims that she just wants to make this right. It seems as if she wants absolution from her daughter. I don’t know if she gives it and I don’t know if Penelope deserves it. I mean, maybe. You can forgive people and free yourself from the ties that bind you to them. That doesn’t necessarily mean that you accept or approve of what they did.

On that note, Reggie and Veronica are trying to get back together. They reach an impasse, though, when she balks about taking down that giant Hiram painting. Reggie would rather not live his work life under the literal shadow of Veronica’s father. They talk it out and come to the conclusion that they’re probably not good together. Veronica takes down the painting, though. 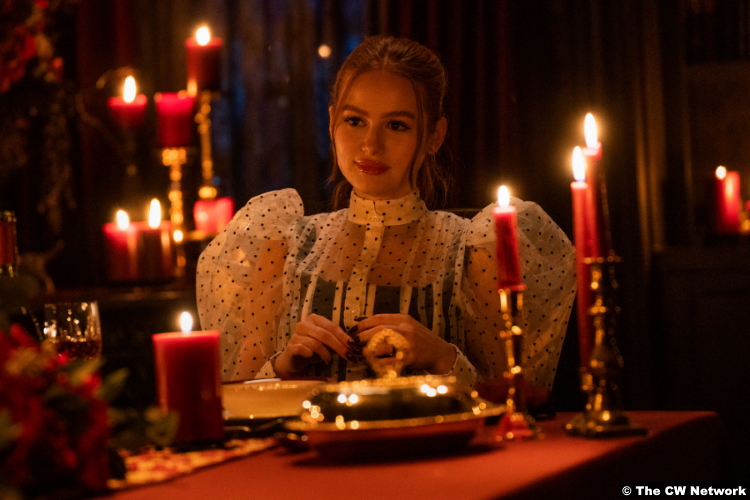 Next in my notes, I wrote “financial mayo”? Ohhhh, wait. It’s actually “Percival mayor.” Yeah, that happened. That’s just one of the baby steps toward his endgame, of course. Speaking of which, Jughead asks Tabitha more about her power. Specifically, he wonders if she could go back in time and prevent the bomb, so that he could still hear. At first, she tells him that it’s one of those fixed points, one of those things you can’t change.

Bzzt, she’s lying. She doesn’t want to change it, because that’s the event that gave everyone their powers. Powers, in fact, that they’ll all need to defeat Percival. Uh, if they can. Because as Tabitha confesses, she’s already been through over a thousand possible scenarios. The good guys have won twice. Two times. But perhaps the bigger problem, at least for Mr. Jones, is that he dies every time. Nothing foggy about that.

8/10 – This was a pretty great episode and not just on the warped scale that I use for this show. It was very spooky and although everyone was separated because of the fog, it felt less discrete than it often does. Also, I really love that everyone in this town has about a million candles at their disposal.