Moon Knight is the sixth series based on characters from the MCU, but it is the first to feature an entirely new creation. WandaVision was dependent on the viewer understanding the tragic history between the two title characters, as depicted in Age of Ultron, Civil War, Infinity War, and Endgame. Falcon and the Winter Soldier makes the prior Captain America movies, as well as Endgame, essential viewing. Can Loki be watched without the viewer having first seen Thor, Avengers, Thor: Ragnarok, and Endgame? I suppose, but I can’t imagine the experience being very enriching; it was made with the assumption that you are an MCU junkie. The most recent two shows, What If…? and Hawkeye are a little more detached, but the latter still leans on the past pretty extensively (otherwise you’re left to wonder what on earth is going on with that Broadway play), and the former expects you to know the ins and outs of the MCU storyline thus far, to appreciate how different things are in other universes.

Moon Knight requires no such baggage. Were it not for the PG-13 level violence, and lack of Rosario Dawson’s Night Nurse, you might think it was a Netflix/Marvel series on the same “quasi-MCU” playfield that DareDevil, Jessica Jones, Luke Cage, and Iron Fist were on before Disney+ swallowed them up a couple of months ago. Other than a handful of blink-and-you’ll-miss-it references and background easter eggs, there is nothing in Moon Knight to connect the story to the current events of the MCU. Take out the passing mention of the Global Repatriation Council (little more than a billboard in the background), and this story could be set at any time in the MCU history (or otherwise).

As much as the MCU has been an interconnected series of stories playing off other stories, building to even bigger stories (much like comic books themselves) it’s nice to have a series that is, in effect, little more than a standalone graphic novel. It’s in the world, but not dependent on the world. Nothing happens that will directly impact the big picture “Avengers-level” plot that’s only just starting to play out (which is all about the multiverse), but there’s also nothing that happens here that will contradict that plot, either. As such, Moon Knight is allowed to be an MCU story, but also one that stands on its own. It’s an origin story, albeit one that has the hero already well into his time with the cape and cowl, he just doesn’t know it yet. 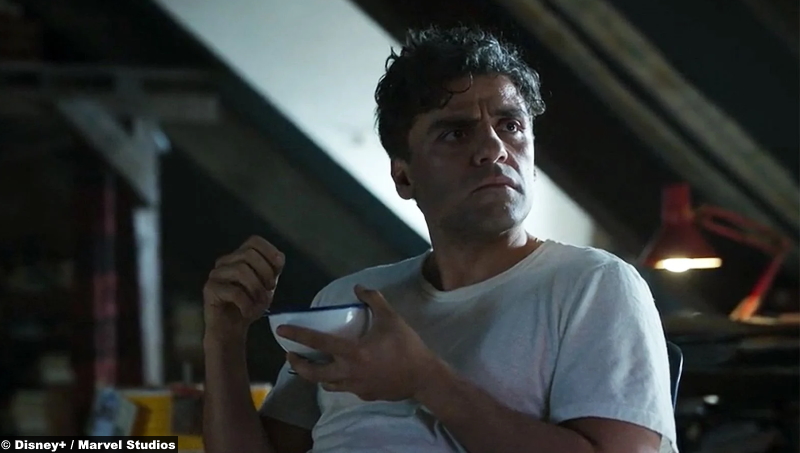 We’ve had reluctant heroes (Hulk, Winter Soldier). We’ve had unlikely heroes (Dr. Strange, the Guardians of the Galaxy). We’ve had heroes with redemptive stories (Iron Man, Thor). We’ve had people born heroes (Captain America). We’ve never had a person who embodied so many different roles as a single hero. We’ve never seen a hero who is both a protagonist and a quasi-antagonist like we have Steven Grant/Marc Spector.

The former is played like Clark Kent if he wasn’t just pretending to be an oaf. He’s nervous, jittery, scared of his own shadow, but also tremendously intelligent. He’s exactly the sort of person you wouldn’t peg to be a hero who has to learn how to become one as the story progresses. On the other hand, there’s Spector, who is more of a rogue, a punch first, ask questions later sort of protagonist who is more than capable of getting his hands dirty (even bloody) when the situation calls for it. Naturally, he has a dark past that haunts him and a lot of repressed guilt that drives him. He’s exactly the sort of person you wouldn’t call a “hero” but who, after a tragedy or two, could easily become one. 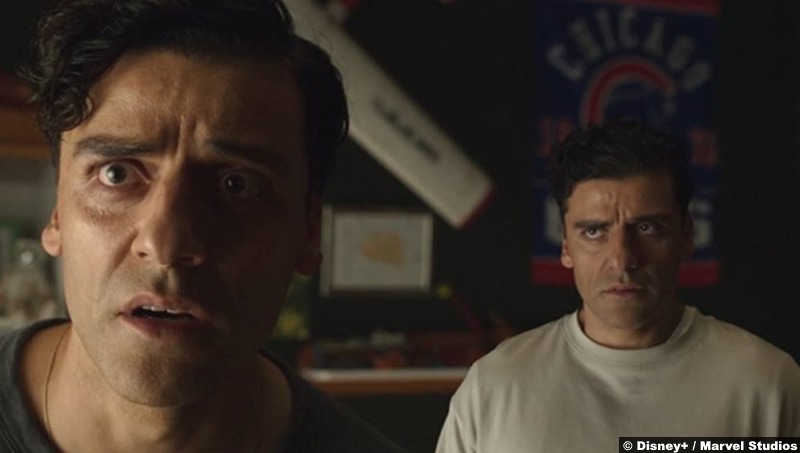 So what we have are two, by-the-book superhero origin story archetypes. The wonderful catch is they’re both played by the same person, suffering from Dissociative Identity Disorder (formerly known as multiple personality disorder). Throughout the season, we follow the two characters—only one of whom, for most of the season, is aware that he has D.I.D.—as they play ping-pong with the two personalities, using them as needed (Steven for solving puzzles, Marc for the punchy-punchy), and occasionally forcing each of them to get out of a sticky situation by playing left-handed (March having to figure something out, Steven having to fight his way out of a tight spot).

It’s the sort of premise that would work without much effort in a novel, and could easily work in a comic book form (naturally, considering the source material), but could easily fail a hundred different ways in live-action. If the actor playing the different personalities doesn’t do enough to distinguish the two, it becomes muddled and fails. If the actor does too much, it becomes hammy and fails. Oscar Isaac had a tall task before him but he not only rose to the occasion, I would argue he was so effective that I, at times, simply forgot I was watching one actor playing what is, effectively, two different roles. Especially toward the end of the season, when the two personalities are on screen at the same time, sharing the same space (as opposed to just being a reflection in a mirror), the editing, acting and blocking all work perfectly to sell the idea that we’re seeing two different entities, even though we’re only seeing one. 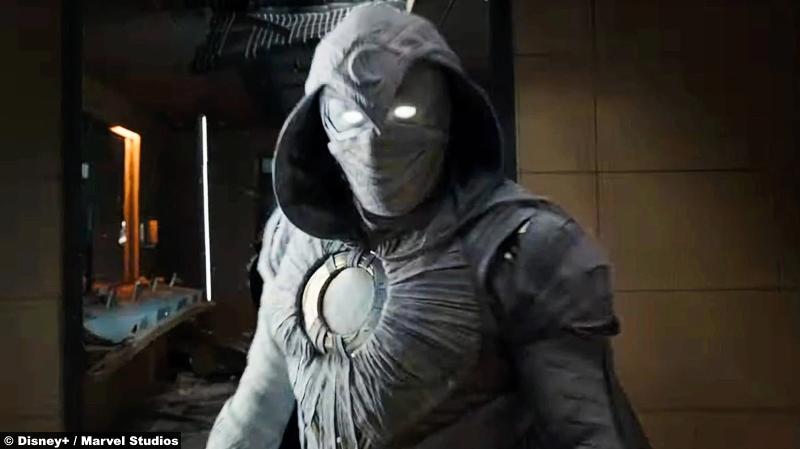 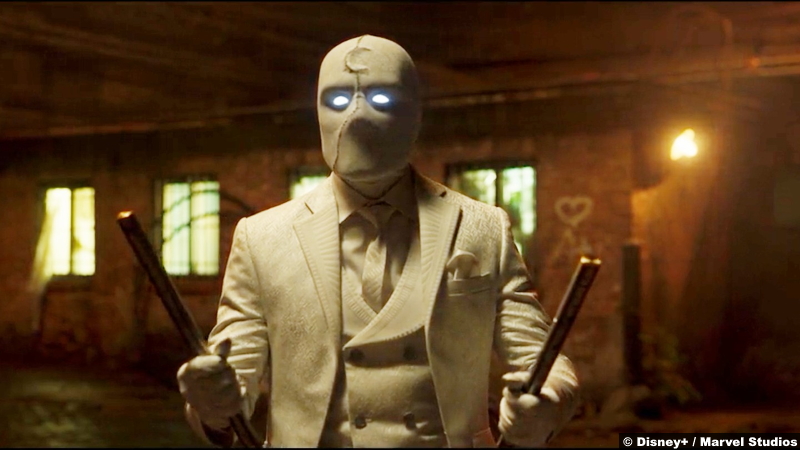 At the heart of Moon Knight’s plot is a standard comic book storyline: The hero serves at the behest of the Egyptian god Khonshu. The villain serves at the behest of the Egyptian goddess Ammit. The villain wants to spread the power of his villain across the world, in the form of a global “judgment” that will kill, not just those who have committed crimes, but those who might. Those who are capable of evil must be eliminated, according to Ammit, a notion of justice too twisted for Khonshu, who believes in dolling out punishment to those deemed guilty. Ammit finds that absurd since, by then, the damage is already done. There’s not much time for a great philosophical debate between the two ethical positions, but it’s nice to have it running through the background, at least. 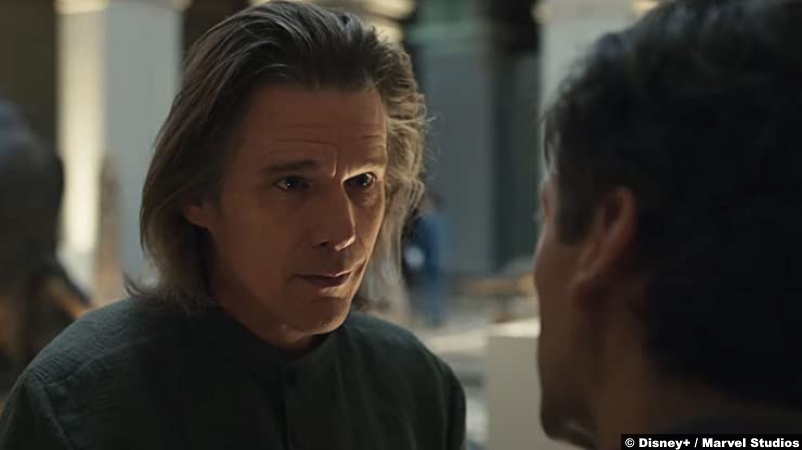 All this leads to the standard climactic showdown at the end which, not surprisingly, is very “typical MCU action climax” stuff. I might have wanted something a bit more unorthodox, considering how different so much of the season was leading up to the last episode, but I’m not going to complain. There was some grumbling that Moon Knight (the hero all dolled up in his cloak and so forth) was barely in his own series, so those fans will certainly be happy with the finale (there is some great editing that depicts Moon Knight and Mr. Knight and the frantic switching between them). For me, the reason this show is, in my opinion, the best-made of all the Disney+ series, is because of the great acting done by Oscar Isaac. Take him out of the equation and you’re left with a run-of-the-mill comic book origin story. But why take him out of the equation. Take Marc Spector’s mental health struggles out of the equation and Moon Knight is just a Batman ripoff. It was the D.I.D. element that helped the comic book character evolve into something more. Oscar Isaac almost single-handedly makes this show.

A giant talking Egyptian hippo-god can only do so much.

10/10 – Moon Knight offers superb acting to compliment one of Marvel’s most underappreciated superheroes. While I don’t predict this will be a show that garners the viewership of some other MCU properties, I do think it will be talked about, and lauded, for years to come.