In January, we kicked off the series by looking back at Robocop, one of the weirdest, wildest, most audacious action films of the 1980s. In February, we looked at what might just be “the perfect movie,” The Princess Bride. After that, we looked at The Living Daylights and reminisced about the missed opportunity that was Timothy Dalton as James Bond, a franchise actor whose big role was taken away from him when he still had plenty of good work left to do.

The legendary English director helmed a baker’s dozen movies between 1953-1999, though nine of those thirteen came in the 18 years between 1953 and 1971, an average of one movie every two years. After that, his output slowed down considerably, and his next three movies were released over the subsequent 16 years. After that, it took him 12 years before his final film hit theaters, though it was released four months after he died. What was he doing during those long stretches between movies? Apparently, he was developing movies he would end up never getting the chance to direct. One of them was A.I., which Steven Spielberg finished in his honor. Another is the much-talked-about Napoleon biopic. We’re left to wonder what might have been, but we can hardly call the filmography we have an incomplete library. On the contrary, with just thirteen features, Stanley Kubrick forever cemented himself as one of the 20th century’s finest filmmakers, with a catalogue of movies unlike any other. No two films are alike: Spartacus is a historical epic, A Clockwork Orange is a macabre crime thriller, 2001 is a science-fiction adaptation, the Shining is a psychological horror, and Dr. Strangelove is a cautionary tale masquerading as a comedy/farce.

With a repertoire so varied yet so high in quality, it’s no surprise that cinephiles find it impossible to agree on which film is his “best.” For me, however, the choice is easy…

1987’s Full Metal Jacket is the last film Kubrick worked on and saw released in his lifetime. He might have “all but” finished Eyes Wide Shut in 1999 but after he died, Warner Bros. infamously removed about twenty minutes of footage. In fact, those twenty minutes were so debated between the studio and the director that, when Kubrick (who had the right to make the final edit of the movie in his contract) refused to remove the footage, Warner Bros. refused to release the film. Refusing to budge, Kubrick went to his grave with the belief that his last movie would be Full Metal Jacket.

Had it been, what a way to go out it would have been.

In my opinion, Full Metal Jacket represents the director’s magnum opus. It’s the culmination of everything he had worked on over the years preceding its filming, especially of his biggest films. It contains elements from almost every previous movie, elements that were perfected as much as he could perfect them in those films. It’s with good reason that Kubrick did not follow up Dr. Strangelove with another comedy/farce; he said all he needed to say there and likely realized he would not be able to dive back into that genre without it feeling stale. The same is true of his work as a science-fiction director on 2001, or as a horror director on The Shining.

Remarkably, the director is so renowned as a “sci-fi director” despite having only one film under his belt. He’s placed, rightly so, as one of the best ever to direct a horror movie, though he only directed a single film in the genre. Kubrick is simply the best “one-off” director ever, and the closest he ever came to making a sequel to any of those classics is Full Metal Jacket, a film that combines social commentary (at the heart of A Clockwork Orange), dark humor (best employed in Dr. Strangelove), horror (stunningly done in The Shining), and philosophical reflections on the nature of man (at the heart of 2001) all in one amazing package.

The film is divided into two equal yet wholly distinct sections. In the first, we follow several Privates in the Marine Corps undergoing boot camp under the tyrannical thumb of Drill Sergeant Hartman. Hartman is played by Lee Ermey, who had been an actual Drill Seargeant and was originally brought in merely as a consultant. He was so good at his job that he made the intended actor look inadequate, and thus replaced him in the role. At the receiving end of Hartman’s many verbal assaults were, in particular, Privates Davis and Lawrence, not-affectionally nicknamed Private Joker and Private Pyle (the former because he brazenly cracked a joke the first time he met the Drill Seargent, and the latter because he was dimwitted). 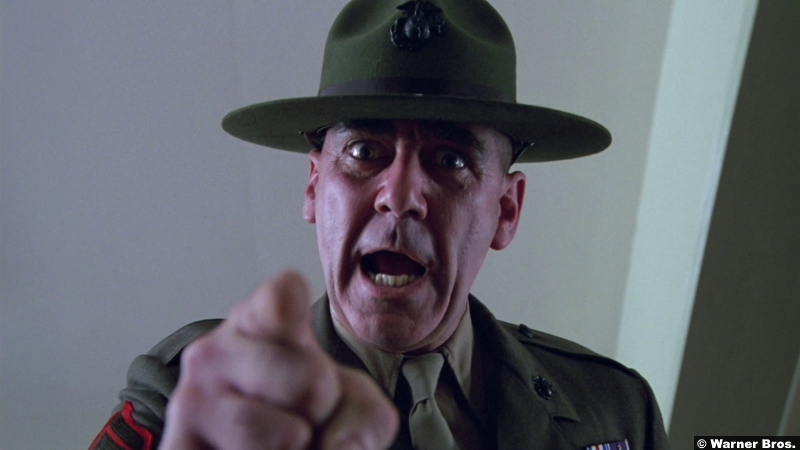 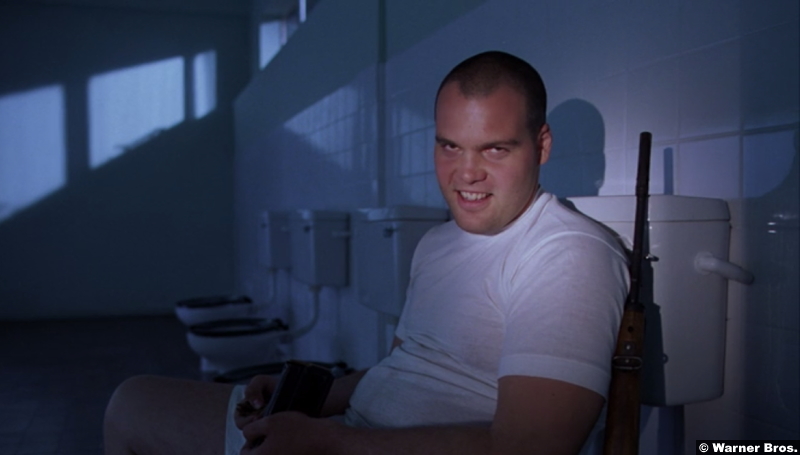 The link between the two halves is Private Joker, played by Matthew Modine, who eventually leaves basic training and goes to Vietnam, serving as a War Correspondent. The standout of the movie, however, is Private Pyle, played by Vincent D’Onofrio. Pyle is, essentially, a deconstruction of the kind of low-education, low-IQ person that probably should never have a gun in his possession, much less be drafted into actual combat, but who was throughout the horrors of the Vietnam conflict. He’s a poster child of the same kind of person the character of Forest Gump is derived, albeit with a radically different tone. Forest Gump was aspirational; Private Pyle is a red flag warning for all to see. He is unstable, unprepared, and unready for what the US Government seems determined to cast him off to. Thus the great subtext of the movie: As hardnosed and demanding as Sgt. Hartman was, Private Pyle was still well on his way to leaving basic training still out of shape, still inept, and still unqualified to hold a pointed stick, much less a loaded rifle. So what did Hartman actually accomplish? What’s the point of any of it? That basic question is explored in the second half of the movie, as we follow Private Pyle and the horrors, the injustices, and the ugliness of war in all its forms. 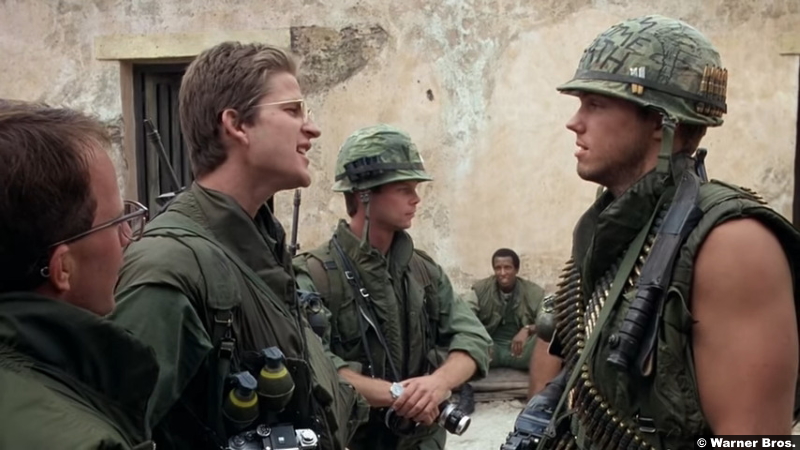 Vietnam was the first war that Americans saw in a raw and unfiltered way. War propaganda was common in World War II, and it was easy to root for the Allies when Daffy Duck was mocking Hitler in 6 minute short films that are carefully scrutinized and message-controlled by the US Government (not that we shouldn’t have rooted for the Allies in WWII; I’m just saying). It’s a much different thing to watch the Vietnam footage. No one was saying “what’s the point of this war” in 1941. Everyone was saying it in 1971.

Full Metal Jacket was released a dozen years after the war ended, at the peak of the Reagan/Thatcher era of western pressure against the Soviet Union, at a time when worry over Nuclear War was rampant and the fear that any small conflict in Europe could lead to both sides staking a claim, escalating their agendas, and ending in a full-scale war. It was released at a time when, in the West, war was merely talked about. When soldiers enlisted and were trained but hardly saw conflict, certainly not to the degree of Vietnam. It was released during an era of convenient jingoism when men in suits casually discussed options regarding war “if it ever came to that” with little regard for the “grunts” who would be fighting and dying in such conflicts.

Full Metal Jacket reminds us of the toll a needless war can take. It makes us gasp at what it does to the minds of people ill-equipped to fight but who are conscripted to do so all the same. It makes us shake our heads in horror at the ugliness of it, which looks all the uglier when its pointlessness of it is factored into the equation as well. It’s a daring, bold, beautiful (in a graphic way) cinematic triumph. It’s arguably Kubrick’s finest film and my personal pick for his best work.