My ranking of the big songs (not counting the reprises, codas, or fragments that are peppered throughout the episode) from bottom to best:

9) Going through the Motions 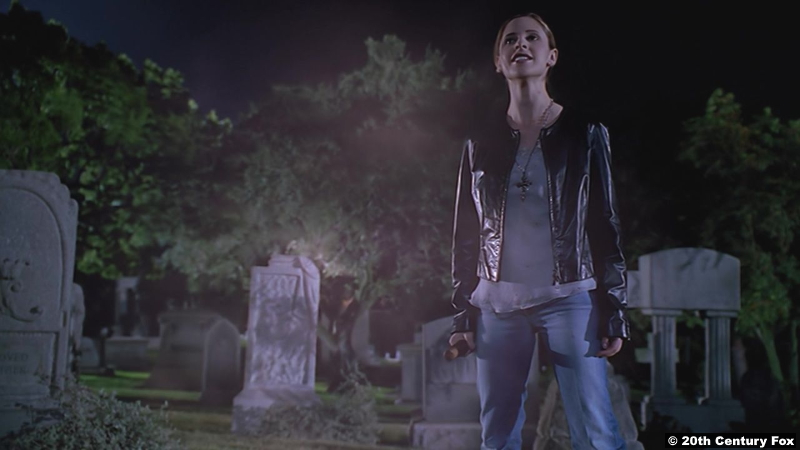 The opening number is at the bottom of the list, but not because the song is not good. On the contrary, it does exactly what it needs to do. It wasn’t meant to be the biggest number in the episode, but it did have the important task of selling the “idea” of the episode to the viewer tuning in for the first time based on the hype (UPN did give this episode a ton of promotion), or to the Buffy viewer skeptical of the “need” for such an episode.

Making the tune a classic Disney Princess “I want” song was a masterstroke. It sets not only the tone for the episode with its overly theatrical camera work and acting, mixed with classic Buffy humor (like the goat demon’s “ow” and the Handsome Damsel she rescues, trying and immediately failing to woo her), but also underscores the season-long plot of Buffy wrestling with her post-resurrection depression.

It’s a simple song but perfectly done, and since this is at the bottom of the list, I’d say that adds up to an overall episode that is (in my opinion) the best hour of the show’s history. 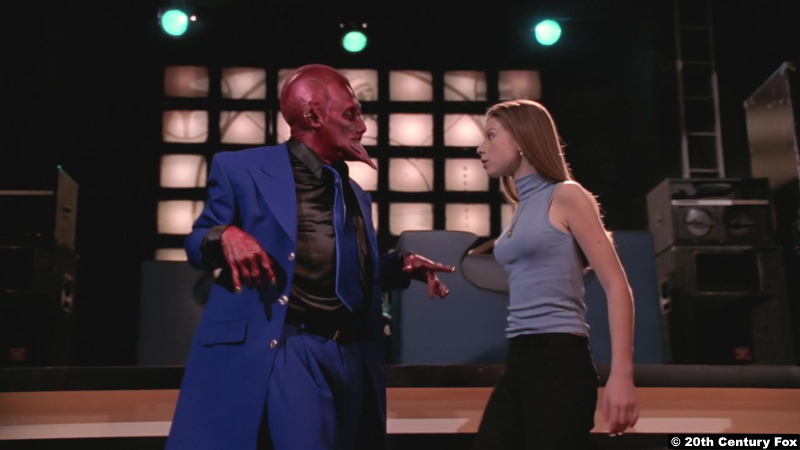 Dawn’s falsetto isn’t the best, but her dancing more than makes up for it. Sweet’s raspy jazz-infused voice is a treat, and the tune is so much fun you almost fail to notice just how much exposition you’re being fed. I also can’t get over two particular bits of really excellent special effects (for the day and the show’s budget): The door that drops revealing a combusted victim and Sweet changing from red to blue. The latter effect is so seamless I marvel every time I see it. I’m sure it was done with a simple trick, but it looks so perfect I always gasp. 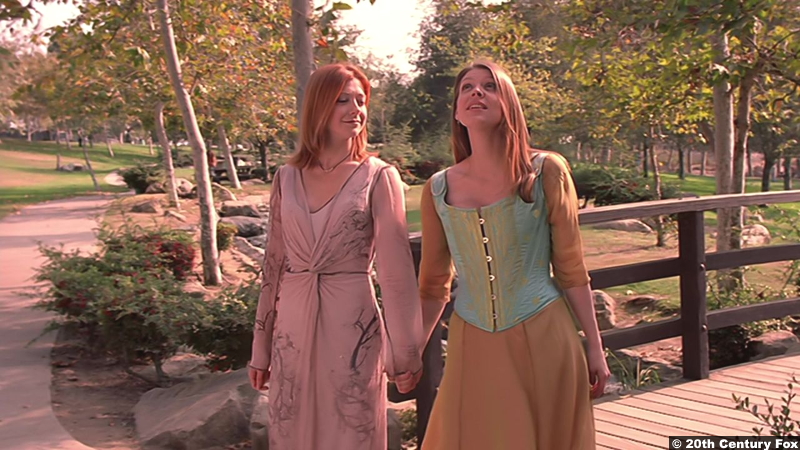 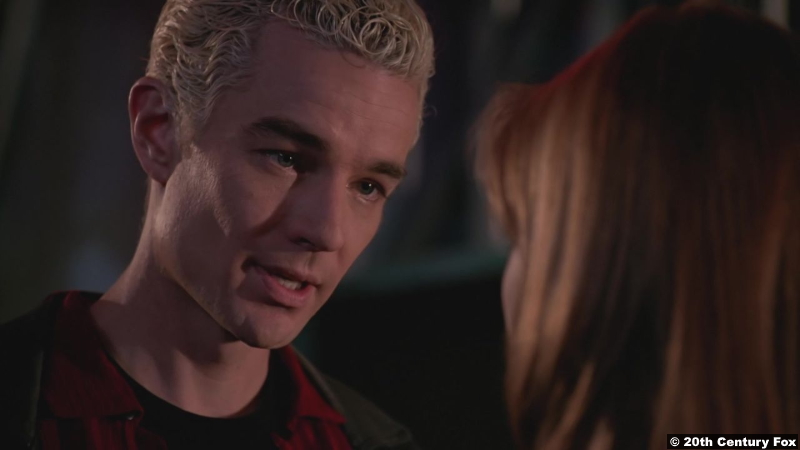 Probably my favorite from a direction standpoint, as Joss shoots it like a late-90s/early 00’s music video, with dutch angles, sweeping camera movements, multiple locations, etc. The song’s fun too, and as great as Spike is throughout it, my favorite thing to do while it’s playing is watching Buffy move silently through the spectacle, acting only with her eyes. It’s great stuff. 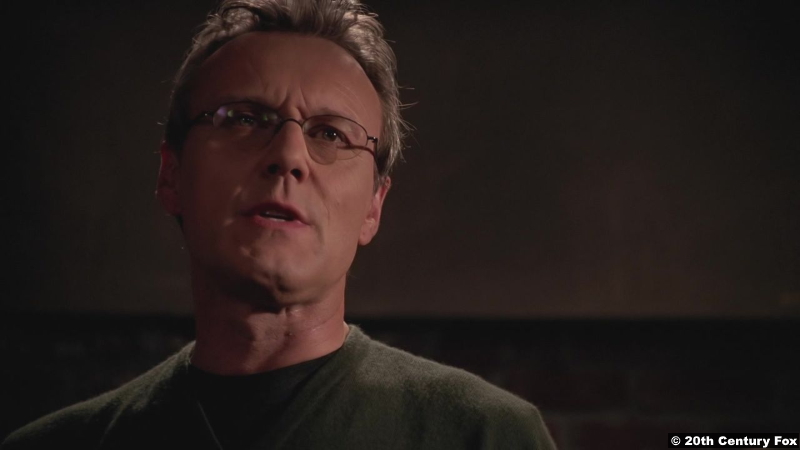 Anthony Head’s ability to sing is probably the reason we have this episode in the first place. The fact that his talent was used to great effect in past episodes allowed Joss to do more and more with music until he finally got to make his musical. Standing might be rated lower on some lists by those who find the song a bit too subdued. That’s the thing, though: These aren’t just “songs inspired by Buffy.” These are songs sung by Buffy characters to Buffy characters. The songs don’t just service the plot; they are the plot. Between this episode and Giles singing the Exposition Song in Restless, I can’t help but think there’s an alternate universe out there where Buffy’s entire show is a musical that does its exposition and big dialogue reveals through singing.

I want to see that series. 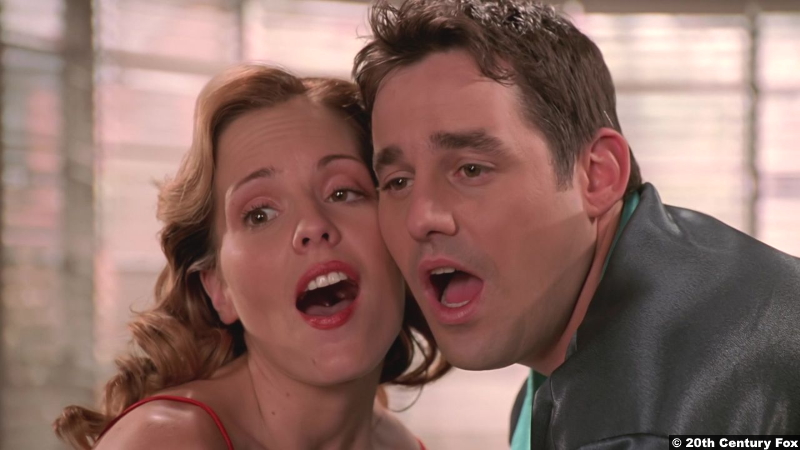 Endlessly charming, funny, and sweet. Xander and Anya’s duet is a great throwback to the Fred Astaire days of musicals. I love Anya’s face when she says “his eyes are beady.” Every line in the song makes me smile, right down to Xander’s: “You’re the cutest of the Scoobies, with your lips as red as rubies, and your firm yet supple–tight embrace!” It’s impossible to listen to this song and not bob your head and grin like an idiot. Of course, the fact that the song—catchy and seemingly chipper as it is—is really a just way for the two of them to express their pre-marital insecurities, worries, and deepest, darkest fears (all of which come to a head in the most heartbreaking of ways later in the year, in the episode “Hell’s Bells”) is another reason why this episode is the greatest. 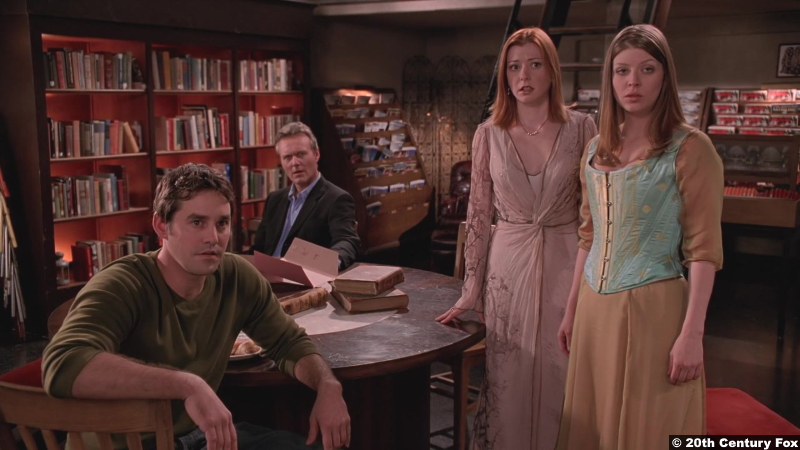 I know, most people dismiss this one as a one-joke song, but just hear me out. First, this is the second most fun song, after I’ll Never Tell. Second, it’s a good showcase for the whole Scooby Gang as even Willow is allowed a line or two. Obviously, Anya’s Bunnies interlude is the highlight everyone thinks of, and yes it’s hilariously delightful, but I’m drawn more to the subtler moments, like when Buffy first starts singing and it causes Giles to stop and turn to face her.

Giles’ storyline in the episode is about how much he feels Buffy is slipping away from her responsibilities and relying too much on him for the heavy lifting. So when she sings “I’ve got a theory; it doesn’t matter…” he can’t help but turn and focus on his champion, to see how she’s handling this. While everyone else is singing harmony with Buffy, Giles is quiet—I think as an expression of his desire to leave the group and force them to mature without him—until, near the end of the verse, Buffy looks right at him and smiles as she sings, which makes Giles smile and start singing, a sign that he loves her too much to walk away from her (yet).

Near the end, they all sing the line “we’ll pay the price; it’s do or die,” after which Buffy shrugs and solos “hey I’ve died twice.” When she does, Joss cuts right back to Giles, who laughs at the line, completely taken in by her charm. He can’t leave this girl; he lost her and just got her back. Little does Giles know, Buffy’s quip about dying was really a coping mechanism to hide the genuine depression she feels after being resurrected, a fact that will come to a head at the end of the episode. There’s so much poignancy and beauty packed into what we mostly just think of as “Anya’s funny bunnies song.”

2) Walk Through the Fire 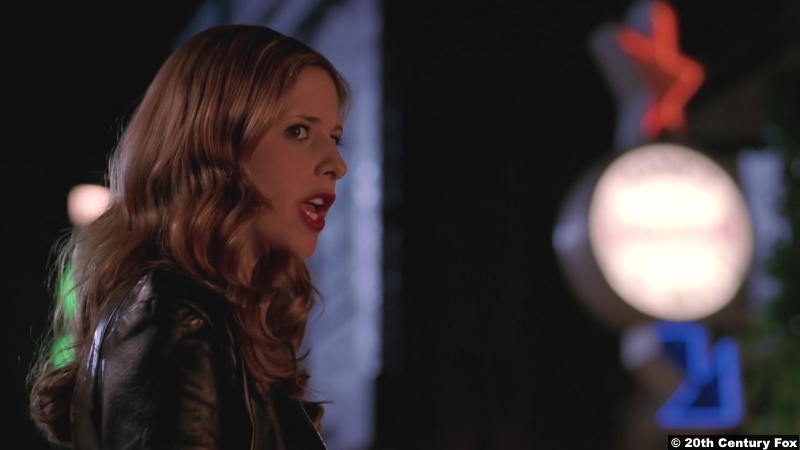 When critics try to dismiss “Once More With Feeling” as a mere musical, or when they try to argue that the end result failed to reach the high goal it set for itself, I always shake my head and think of this number, which managed not only to be a rousing song but which also conveyed a sense of tension and anticipation as the heroes headed for the final showdown. Joss was already a master at crafting scenes (or sometimes whole episodes) that conveyed a sense of tension and buildup to the big showdown with the baddie; here he pulled off those same feelings Buffy fans were more than accustomed to, only this time through the medium of a sweeping musical number.

1) Give Me Something to Sing About 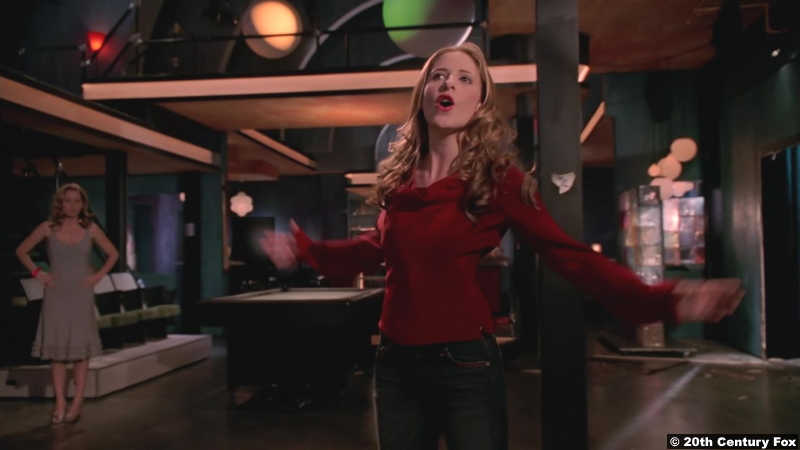 The big finish, essentially. It hits every note (no pun intended). It’s beautifully sung, powerfully written, and features a ton of great moments. I love Giles saying Buffy needs backup and then sends Tara and Anya to be literal “backup dancers.” I love the haunting B-minor to B-diminished when Buffy sings “heaven,” and then when Spike sings “living.” I love when Buffy sings “give me something” to Sweet in the most pitiable and pleading way and he just, very subtly, shakes his head ‘no.’ It’s at that point that Buffy realizes she’d rather dance and burn just to feel anything, leading to Spike saving her life. I love, that as Buffy is contemplating Spike’s advice that she has to go on living, Dawn calls us back to the end of season five, to the moment before Buffy sacrificed herself…

“The hardest thing in the world is to live in it.”

I love the inherent cheesiness that comes with the territory of a musical production, and how the show knew it would never work if it didn’t go 100% sincere with it. The ending is the best example of that, as the heroes all clasp hands and then dramatically separate, foreshadowing the hard days ahead for them. 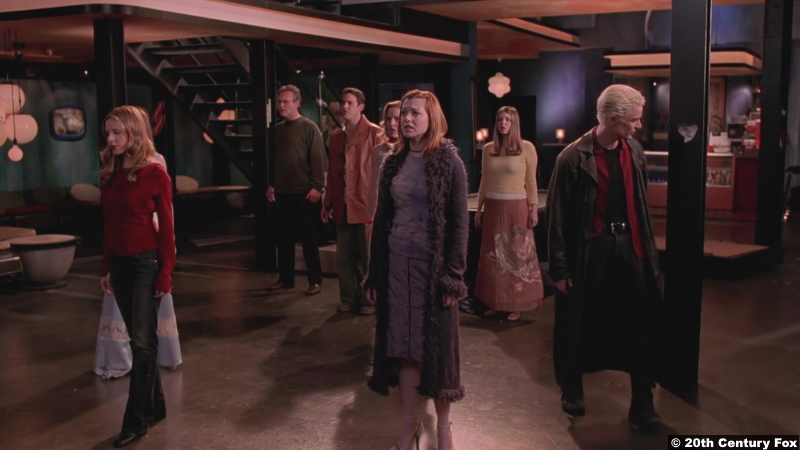 That’s the end. Seven seasons of Buffy, plus five seasons of Angel. It all began with a show that was little more than a mid-season replacement on a little-watched network. It began as a show at first regarded as nothing more than a spin-off of a movie already largely forgotten by pop culture enthusiasts. It began with a rocky and messy first season, completely produced and brought to air before any feedback could be given, seemingly tossed to the wolves to fill airtime and little else.

And then it thrived.

Its second season showed maturity in the writing, production, acting and tone. Everything had improved, to the point where, midway through the year, the show had entrenched itself into the zeitgeist of genre fandom, never to relent. Better writing followed in season three, bigger risks were taken in season four, and the show arguably reached its zenith at the end of its fifth season, just as its main heroine leaped to her sacrificial death. The resurrection that followed was a rocky and messy one, essentially resetting the table on a new network, in an era where so many copycat shows had come along to put their own spin on the formula.

By the time the series ended, its fans said goodbye with a feeling of satisfaction and contentment rarely enjoyed with long-running shows. Usually, by the end, the fanbase is either united behind the desire for more more more, or they are split in half, with many saying the show should have ended long before. While Buffy had a few who thought season five should have been the end, by the time the actual last episode aired, there were few to be found who weren’t happy to have had another two years with the Scooby gang, and fewer still who weren’t happy with how the show said goodbye.

Twenty-five years after it began, and nineteen years after it ended, Buffy the Vampire Slayer remains a quintessential piece of fantasy television. Its premise was silly. Its characters were sillier still. But the whole of it was a magical experience, illustrating the often turbulent journey everyone must take from childhood to adulthood, and the many demons (personal and otherwise) we all must contend with along the way. Buffy reached her endpoint. She saved the world (a lot) and, as the final moments of her final episode drew to a close, all she could do—all she needed to do—was sigh and allow a satisfied smile to cross over her face, the same smile her fans have every time they go back to Sunnydale, to re-watch the Slayer do her thing.