After the critical and commercial success of Batman 89, Warner Bros. eagerly signed director Tim Burton to a sequel. The young filmmaker, however, was not keen to dive right back into the world of Gotham City. He first created the film that I consider to be the one that best encapsulates everything that made his early work so wonderous: Edward Scissorhands. Though hardly the smash hit that Batman was, Edward Scissorhands nevertheless made 20th Century Fox plenty of money and was another critical hit. When the time came to direct another Batman movie, Burton held all the proverbial cards and could dictate to Warner Bros. the terms of the deal. WB agreed to give Burton full creative control over the film and Burton, happy to be unshackled by studio mandates, turned in a movie that was far more “Burton” than “Batman.”

Batman Returns was darker, moodier, more macabre, filled with more dark humor and more body horror than any comic fan could have imagined. The film has its supporters (personally, I love it for everything it is, and don’t worry about how much it is not a proper Batman movie), but by and large, audiences were either baffled or mortified by it. WB lost out on many lucrative merchandising deals and promotional tie-ins as a result of how polarizing and “not kid-friendly” the film ended up being.

Burton was happy with the film, however. Why wouldn’t he have been? He didn’t set out to make a movie that pleased studio execs or comic book purists; he set out to make a big-budget Tim Burton movie and that’s what he did. So, happy with the result, he entered into a meeting with WB brass to discuss returning for a third movie, and, only then did he realize that the studio did not really want him to return.

Sensing the cold reception they were giving to his ideas, he bowed out of the project and opened the door for a new director to take over. WB settled on Joel Schumacher who, to that point, had directed some small budget but well-received films such as St. Elmo’s Fire and Lost Boys. He also had just finished the critical and commercial hit Falling Down. He seemed no less suited to Batman than Tim Burton, whose only claim to fame before the 89 movie was Pee Wee’s Big Adventure and Beetlejuice. 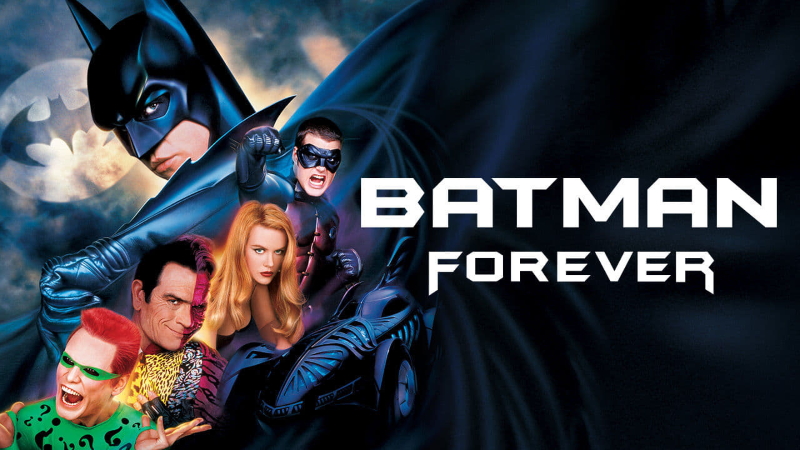 What Schumacher brought to the project was a movie that was a big enough hit at the box office and with critics to give the director carte blanch on the next Batman movie…because WB did not learn the right lesson the last time they did that. But we’ll talk about Batman & Robin some other time; this is about the first Batman film Schumacher made, Batman Forever, and how it was almost a great film in the franchise.

To start with, there’s the man himself. Michael Keaton was offered the chance to reprise the role (with a hefty payday to boot) but, after hearing the direction of the project, ultimately bowed out. I have often wondered how things would have turned out had he stayed. It’s clear he didn’t favor the style of the film going so far in a neon-infused direction (he wouldn’t have turned down the movie if he was for it). Had he stayed, he might’ve used his sway to keep some of the director’s wilder ideas in check. That, itself, might have had a ripple effect on the next movie, which went even more down the rabbit hole of silliness. There’s some alternate universe out there where Michael Keaton plays Batman in four films by two directors before happily retiring, leaving the franchise dormant for a bit before a new upstart director like Christopher Nolan came along to reboot it in his image.

Ultimately, not much is different, but I still want to see those other two Keaton-Batman movies.

Instead, in our universe, Keaton was out and Val Kilmer was in, and while Kilmer is hardly the worst thing about the movie, he wasn’t enough to save it from being regarded, today, as a lightweight movie better left forgotten. What went wrong with Batman Forever? If you asked that of Batman & Robin, the list is long and easily recorded. With Forever, though, the flaws are more subtle. This movie suffered from death by a thousand cuts. 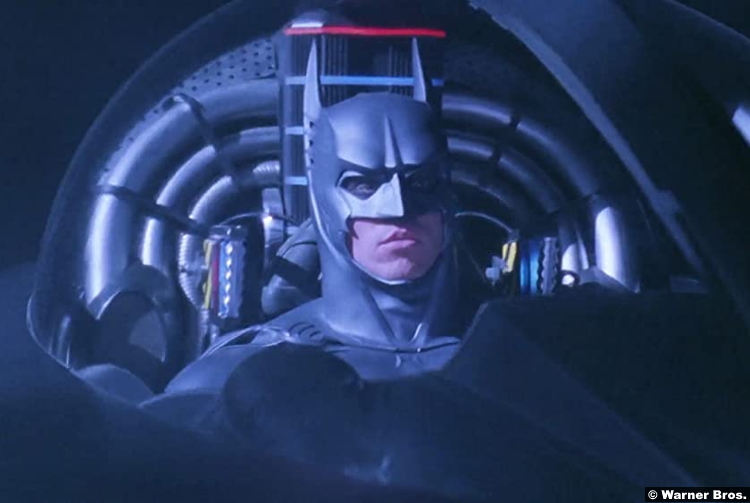 There seems to be a vast discrepancy on display between the story and the film. Usually, these two things meet in the middle: The story is what the film is about and the film is the way that story is told. Stories can be serious things told in a silly way (Dr. Strangelove is the ultimate example of this) or they can be silly things told too seriously (Cowboys & Aliens suffered from this). Most stories have a certain tone to them that a director can pick up on and, even if he or she wants to stretch it a bit, things usually end up feeling true to the writing.

Batman Forever, however, feels like a serious story that can’t help but break out into spurts of silliness. The result is a movie that doesn’t know what it wants to be; it’s a tonal mess. There’s a good, dramatic story to be found somewhere in here but too much of it was either left on the cutting room floor or was simply drowned out by the campiness. Several scenes that dug into Bruce Wayne’s psychological struggles were excised from the movie, making the entire purpose of Dr. Chase Meridian (a psychologist) kind of pointless. Had those scenes been retained and had the campier ones been cut, this might have been looked back on, fondly, as the Batman film that dared to dig into the “who” of Batman (much the way Nolan’s movies tried to explore the “why”). 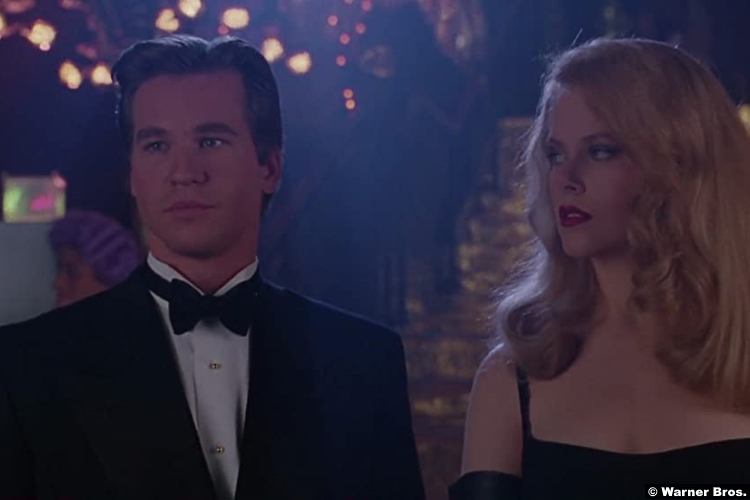 The other problem was the campiness. If you take all of Jim Carrey’s scenes and keep all the psychological stuff edited out, you’re left with not only a pointless movie but a joyless one. At least Jim Carrey brings a liveliness to the production that can’t be denied, no matter how out of place it feels. Ultimately, however, Carrey is both a blessing and a curse. He’s a blessing in that, in the moment, he’s fun to watch. Added up, however, he detracts from the overall experience. 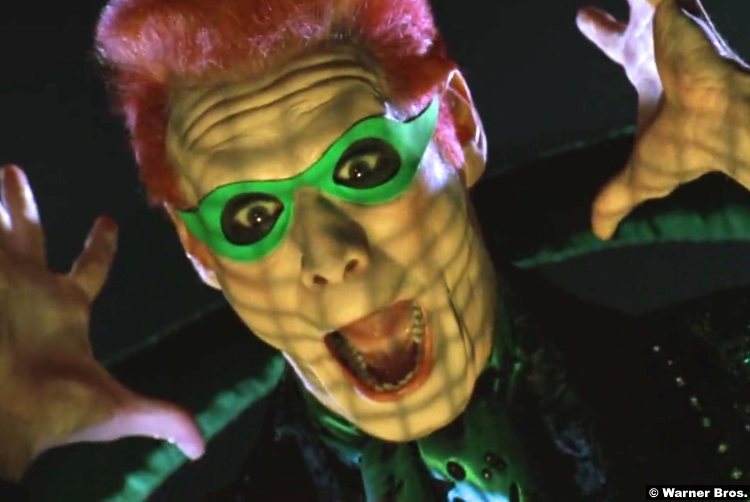 I would argue Carrey is such a humongous screen presence (easily outshining Val Kilmer and Tommy Lee Jones) that he single-handedly takes what could have been a good, dramatic movie, and turns it into an almost-comedy. Jim Carrey’s Riddler is like a character from another film universe that dropped unexpectedly into this sometimes dark and sometimes whimsical Batman story. Tommy Lee Jones’ Two-Face is just bonkers enough to work in this film (sans Riddler). I wonder how the alternate-universe version of this movie, starring Michael Keaton, would have fared with just Jones as Two-Face playing the baddie. I think could have been the best Batman film yet. Instead, what we got was a movie whose co-villain so supremely stole the show during production that he took the direction of the movie away from being somewhat serious to something very silly.

It goes without saying that this week’s The Batman (featuring the first new take the Riddler since Carrey’s performance), will not have such tonal problems. By all accounts, that movie has set its style in stone and is adapting the characters and story choices to fit that tone. The failure of Batman Forever is that it let its characters and story-editing reshape its direction. Expect a full review of The Batman as soon as the film releases.