Your SO OF COURSE preview of WWE ROYAL RUMBLE 2022!

Survivor Series? That can’t be right.

Apparently, I didn’t bother to cover WWE Day 1(ish), which means the last time we looked at the state of WWE was way back in November of last year. I’m sure a lot has changed in the WWE Universe since then, so give me a moment to read all the new developments…

Well, at least it’s late-January time, which means now we kick off the two-and-a-half-month stretch when WWE tries to put on a compelling program or two, week after week. Let’s have a look at the card and see all the ways Vince McMahon can disappoint us! THIS is your SO OF COURSE preview of WWE ROYAL PAIN IN MY SIDE EVERY TIME I HAVE TO SIT THROUGH A THREE-HOUR RAW THAT FEATURES, AT BEST, THIRTY MINUTES OF WRESTLING 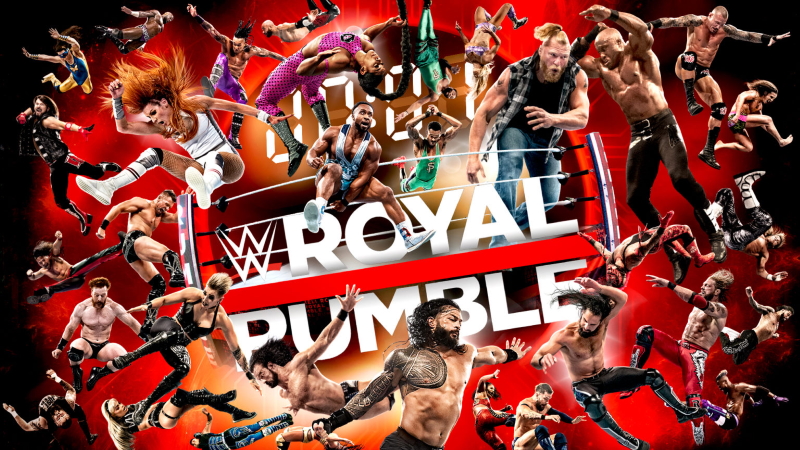 On to the card…

Do I care: It’s hard to, despite how much I have loved Becky, going back to her NXT days, because the finish is such a foregone conclusion and I have no expectations for any good wrestling. I’ll give it a measly 2 confident struts to the ring out of 6.

Who should win: Duh. And based on my prediction for the Rumble finish, doubly-duh.

What it is: It’s two male, singles competitors who, when paired with the right opponent, have the potential either to be outstanding or good enough, while also having zero in-ring chemistry with each other. Added in the mix are two female, singles competitors, both of whom are coming out of retirement. I’m not expecting fireworks.

Do I care: No. While I retain that little sliver of hope in the back of my mind that this match will somehow blow everyone away (wrestling is great about defying expectations like that once in a blue moon), I’ll stick to my guns and say this will be a clunky trainwreck. I’ll give it 1 terrible botched spot out of 6.

Who should win: It all depends on if this will get a blowoff match at Mania. I’m hoping no and that Edge will move on to better things. In that case, the Rated-R Superstar should walk away with the W and head into Mania ready for a new challenge.

What it is: It’s a match we’ve seen many times, with the heel/face dynamic flipped around.

Do I care: I’ve seen the match before and it was good. Throw in Seth being allergic to bad matches and Roman being able to hang with fast performers, and look dominating doing it, and you’ve got the makings of a very exciting contest. I’ll give this a confident 5 thrilling near-falls out of 6.

Who should win: Looking at the odds for the 2022 Royal Rumble it’s not a surprise that Roman Reigns is the favorite to win the fight against Seth Rollins with a betting line set at -240 as stated on SportsBettingDime.com. It’s pretty obvious that we’re getting Roman vs Brock (again) at WrestleMania (again) and that one of the two world titles will be on the line, but it’s really wide-open as to how they get there. Roman could lose and Brock could win; Roman could win and Brock could lose. Both outcomes seem improbable but barring something stupid like them both winning, I don’t see…any other way…this…oh no…

What it is: It’s a hoss fight!

Do I care: This match has been fantasy-booked and wishcasted (mostly from Bobby Lashley) for ages and now it is here. But really, I don’t have high expectations for it. Brock is going to have to work a different kind of match to get any kind of drama out of it. He’s going to have to bump around and sell for Bobby, more than he usually sells for an opponent, and I think it will end up being more boring than anything. I don’t think the match will bomb, but it might underwhelm based on the expectations. I’ll give it 3 german suplexes out of 6.

Who should win: Setting aside a nightmare title vs title scenario, I think if someone is dropping the title a month before Mania it’s going to be Brock. Roman has held the belt too long to lose it this close to the biggest show of the year. Brock is Brock. He can handle a loss and move right on into a title feud with the opponent he seems incapable of losing to.

What it is: It’s the one match a year that is almost impossible to screw up.

Do I care: The Royal Rumble, when done well, features a variety show’s worth of nostalgia, comedy, drama, thrills, and momentous victory. The Rumble is one of those matches that the hero should win by default. Every now and then there’s a good reason to give it to a heel, but usually, this is the match that launches a babyface onto the road to glory at WrestleMania. I’m hoping that happens again, although the specter of a Brock vs Roman title vs title match makes me dread what kind of nonsense they might do to the Rumble finish this year. I’ll be an optimist and say WWE gives me a fun Rumble, which usually makes for a great one. I’ll give my hype levels the maximum: 6 crowd-popping surprises out of 6.

Who should win: As of now, only 22 people have been announced, though many more I’m sure will be revealed on SmackDown this Friday (I’m writing this as of Tuesday). Still, of those we know who are in it, there are a handful of people who make the most sense, and chief among them is the guy who just lost the WWE Title and who still has the support of the fanbase: Big E for the win and a title match vs Bobby Lashley. Joy.

What it is: It’s my prediction for the main-event this year, based solely on who I expect to make her big return.

Do I care: Not as much as with the men, but that’s only because WWE has less interest in promoting it as much as they have the men’s Rumble. 21 women have been announced but, unlike with the men, there aren’t many more left to add. WWE’s going to have to go deep in the legends/part-timers/non-contracted pool to fill this one out. Still, as long as the finish is fun, this should be good enough. I’ll give it 4 “wow, she’s back?!” reactions out of 6.

Who should win: Ronda Rousey. Obviously, I don’t know if she’s even returning, but this is the perfect time for her to do so. She was booed pretty mercilessly by the end of her last run, but hear me out: Most of the fans who booed her have basically quit watching WWE for AEW. So she’s likely to get a more WWE-conditioned audience response. She can come back as a face, heel, tweener, whatever they want. Either way, the pop is likely to be huge, setting up a big rematch vs Becky Lynch. My only concern is Charlotte. I do not want to have to write another installment in the “let’s talk about Charlotte’s Flair’s push” annual series. If there’s a single confirmed entrant this year about whom most people are saying “she’s winning,” it’s her. Hopefully, WWE will catch on to that and use Charlotte as the decoy for the true winner.