Earth and its allies take a win

Season 6 of The Expanse sees the Rocinante and Camina Drummer achieve important goals, whilst antagonist Marco Inaros deals with his son’s failures. I was glad to see the pace accelerates compared to the opening episode. Several small scenes plant pivotal plot seeds for the final four episodes of the series. No surprise there’s such great attention to detail. This episode credits the novelists, Ty Franck and Daniel Abraham (a.k.a. James S. A. Corey), as the writers. Who knows the story better?

As I speculated in last week’s review, the Roci’s mission concerns the Azure Dragon. They net a valuable new crewmember, Bobbie Draper, who boards with orders from Avasarala. The operation isn’t a simple search and destroy, but to commandeer the Free Navy ship. A tall order for the stressed crew. 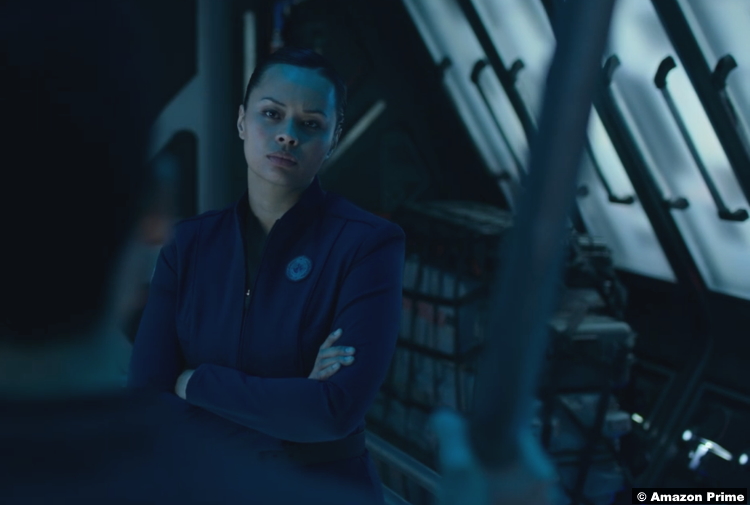 Lastly, Filip Inaros is bailed out by his papa following the murder he committed in the last episode. Legally, Marco argues Filip isn’t subject to civilian law, but military law. Central to this father-son conflict is the new (to the TV series) character Rosenfeld Guoliang. As it turns out, this character, who I thought would have a restricted role, will likely be quite important.

This version of Rosenfeld Guoliang is for all intents and purposes, a brand new character.1 In the first episode, Rosenfeld comes off as an interloper—a power-hungry Free Navy upstart. This episode shows a different side. She doesn’t fear Marco, nor is she impressed by Filip. Through this power she holds over them, Rosenfeld serves as a filter between father and son. 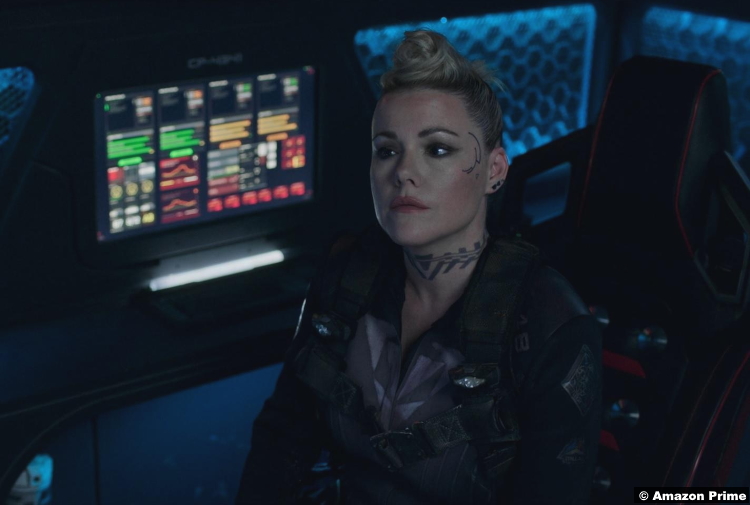 Rosenfeld doesn’t entirely abandon her opportunism in this episode. Staring down Marco in matters of personal affairs, she reveals her utility to him. Her fearless quality encourages the Free Navy leader to open up. In one of the best moments of the episode, Rosenfeld fires astute observations at Marco about his relationship with his son that segues into a voiceover of a scene with Filip going the belongings of the young man he murdered. Outside of Naomi,  Rosenfeld comes the closest to understanding their relationship.

Filip soon comes to her to ask for remunerations for his friend’s family. She shoots down Filip’s idea but quickly rebounds. She sees his soft underbelly, his need for validation, and she feeds the beast Marco created within him. Now, whether or not catering to Filip’s sensitive side is manipulation or earnest engagement is left to be seen.

Cara Gee’s Camina Drummer is one of the best parts of The Expanse.2 I don’t want to say I was bitter about her itty-bitty screen time last week… let’s just say I’m eager to see her arc come to fruition. This week’s episode doesn’t grant her much more screen time—barely more than five minutes—but it feels like much more. 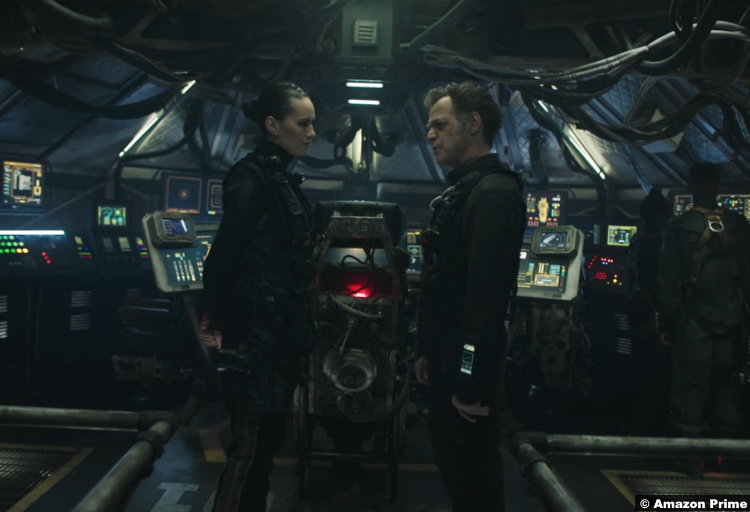 Drummer introduces us to Captain Liang Walker. He hates Marco (yay!). Even though Walker accepted Free Navy rule, he’s pissed they treat all Golden Bough members poorly. (It’s important to recall in Season 5 that Marco ordered off-screen execution of Anderson Dawes, the leader of Ceres and its Golden Bough faction.) Walker has loose lips, and Drummer gives him a tour of her ship to see how far his distaste for the Free Navy extends. The show leaves off this plotline with the implication that Golden Bough might stand against the Free Navy.

Like I said, small scene but a pivotal seed. In a similar vein, Avasarala turns Monica Stuart into her own personal Propagandhi. That takes just over three minutes. To be honest, counting the timestamp for these two mini-subplots, I was shocked it took so little time.

As for the scene on Laconia, I’ll bet the next four episodes continue the “Strange Dogs” novella. I was premature in my claim that “eight years has become six months”. It’s probably a modular narrative that takes place further down the line. This means we likely won’t see any content from the final three books (Buy The Expanse books here: UK / USA / Canada).

The main event of this episode is the Rocinante hunting the Azure Dragon.3 Previously, the crew wasn’t getting along so great. Bobbie’s arrival in the middle of this mess complicates matters. However, the mission proves to be a way for the crew to mend. 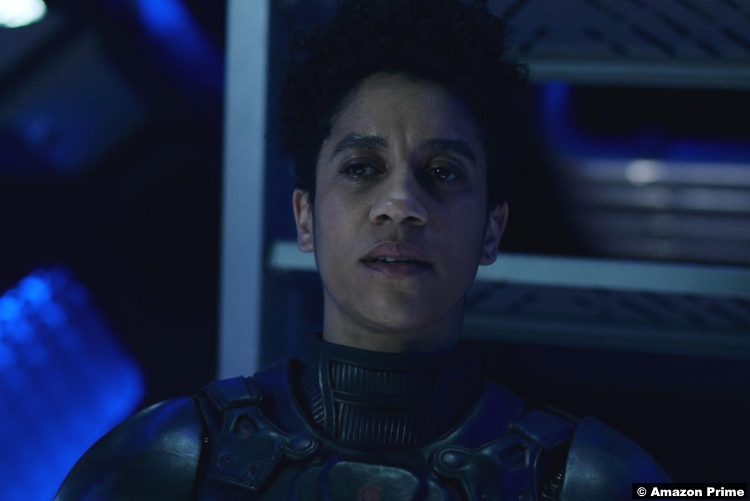 “Really all right or ‘not ready to talk about it’ all right?”

Clarissa “Peaches” Mao is the crux. She arrived as Alex left, and no one but Amos wants her around. So to earn her keep, Peaches saves the day. First, Clarissa jumps into action when Naomi freezes up. PTSD flashbacks to Season 5’s hard transit hit Naomi hard. Peaches even makes up an excuse to cover for her. Then, she saves Bobbie from a rocket launcher by using her combat implants. After all that, Holden gives her a dressing down for breaking the chain of command. Yet this is a win for Clarissa. Holden accepts her as a crew member.

Putting the band back together is a necessary step for the war on the Free Navy to come. If they can’t make amends, they can’t survive. Seeing the slow steps of reconciliation is cathartic to watch unfold. The principal cast is so natural in the skin of these characters, and their plight—emotional and otherwise—is greatly satisfying.

Shout out to the special effects team for the excellent hard sci-fi space chase sequence. The direction and technical showmanship for the spacesuit combat are the best of any “realistic” science fiction ever on TV. It’s still the calm before the storm, but this episode gives a better view of what’s to come.

8/10 – Every team on this show continues to give their best work. The acting and effective writing, even in short scenes displays the depth and strength of these creatives. The pursuit of the “Azure Dragon” builds promising momentum for the series’ final conflict, and is only a taste of ship-to-ship action.

1 Yes, book readers could argue she is a conflation of characters. It’s a moot point. Practically all secondary characters are a mix of original characters and new invention.

2 In large part because the showrunners realized what an absolute gem she is. They gave her all the best roles from the books, and she killed those performances. Cara Gee rocks.

3 It’s too bad Don Quixote doesn’t hallucinate a battle with a dragon in Cervantes’ work. That’d have been a fun literary allusion to build off of. (Rocinante is Don Quixote’s old horse.) 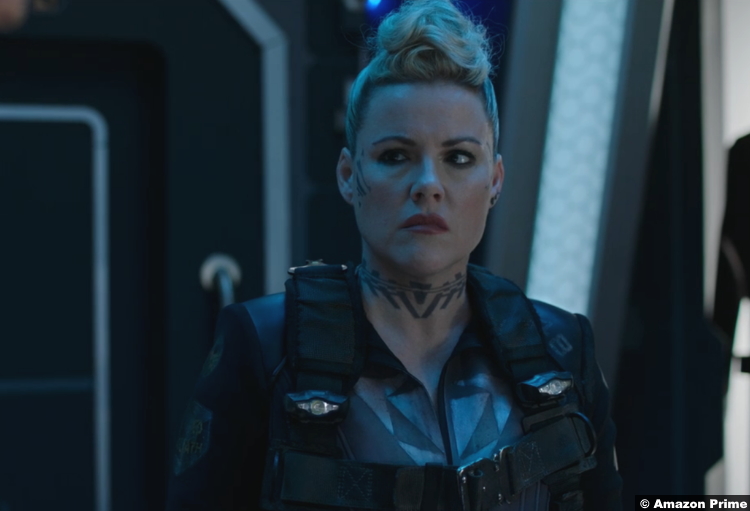